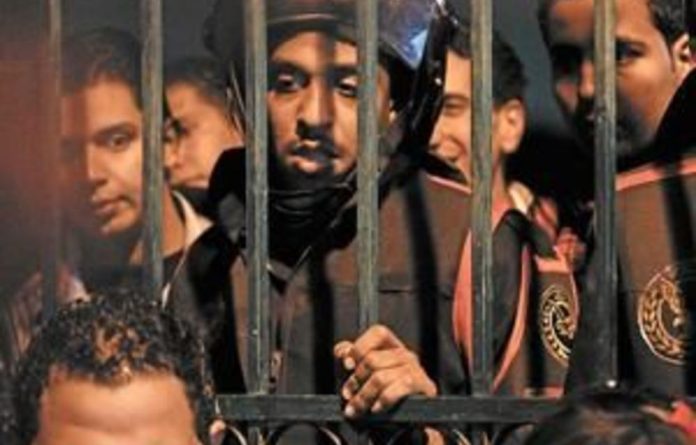 Tarek Mustafa was shot dead on January 28, a police bullet flying through the 24-year-old’s neck as he stood in Cairo’s Sayeda Zeinab Square, taking photo­graphs of the revolution that was rapidly erupting all around him.

His father, Magdy — who now goes by the name of Abu Shaheed, or “father of the martyr” — can pinpoint the exact place where it happened: a grubby mound of sand and soil in front of the neighbourhood’s now burned-out police station.

“Ask anyone, and they’ll tell you Tarek was loved beyond belief by all who knew him,” said Magdy. “He was a graduate from the faculty of commerce, yet in Hosni Mubarak’s Egypt that meant he could only get a job quarrying rocks for the metro system.

“In late 2010, he was laid off and left with nothing. He lived in a country where another young man of the same age might live in a villa and have a car worth two million [Egyptian] pounds, the kind of man who will happily throw 5 000 pounds at the feet of a belly dancer. Meanwhile, my son couldn’t afford a one-pound cup of tea. So he joined the uprising and said he would document this struggle against injustice with his camera. I was supportive of him and the revolution from day one. I never expected I would be making such a sacrifice.”

Ten months on from the day Magdy lost his child, the supposed fruits of that sacrifice are finally being realised. Two blocks away from the police headquarters, thousands of Egyptians — Magdy among them — queued patiently to cast their vote in Egypt’s first free parliamentary elections. In the run-up to the vote, dozens of new names have joined the thousand-strong list of those who have died in defence of a still ongoing revolution.

“It hasn’t achieved anything yet, but nor has the revolution been defeated. This vote today is a way of keeping it alive,” said Magdy.

“Because what’s changed is that there is no longer any fear in the hearts of the Egyptian people. When a police officer walks alongside you, he now has to do so as an equal, not a master. Those in power know that they must show humility to two things – God and the Egyptians. Today we’re reminding them: if you disrespect the Egyptian people, we will make mincemeat out of you.”

But in Sayeda Zeinab and countless other urban districts, towns and villages across the country, poverty — and the institutionalised, state-sponsored corruption of power that has always gone hand in hand with it — has not been made into mincemeat by anyone.

A few kilometres east in Duweiqa, where another police station stands gutted, the in-equality that pervades Egyptian society is brazenly on display: all around are mud-drowned roads, hillocks of garbage and scattered boulders, the jagged remnants of a rock slide that killed more than 100 people in 2008.

In the line that stretched round every wall of the Ahmed Orabi Secondary School for Girls, pressed into action as the local polling station, one woman who lost her home and her sister-in-law in that tragedy said she was voting so that the voice of her community would never be ignored again.

The woman, who did not want to be named, pointed at a huge complex of grey apartment blocks across the road, originally named the “Suzanne Mubarak housing project” after the toppled dictator’s wife and built to house those displaced by the tragedy.

“As soon as the buildings were completed, thugs and rich landowners took them over. It was only during the January 25 uprising that we were able to take advantage of the security vacuum and reclaim them for ourselves.

“You see, out here no one comes to help us, and sometimes it feels like nobody even knows we are here. We have to do it all for ourselves and this election, well, suddenly it feels like we matter, like somebody in a place with power is going to be able to give us a voice.”

Who that person might be hardly seemed to matter to most of those queuing to vote. Many claimed they had yet to decide who to elect from a bewildering array of unfamiliar candidates. “People in Tahrir Square told us to boycott these elections because the new Parliament will be controlled by the military council,” said Marwa Gamil (19), who was about to cast the first vote of her life.

“I think they might be right. But that doesn’t change the fact that, for the first time, I’m about to tick a box and someone far away is going to count it and in that way I’m going to make a difference.”

It was a sentiment echoed by Mahmoud Hassan Mohamed, the school’s 44-year-old head teacher, who sat proudly behind his desk and beamed widely as the polling station’s various cast of characters — soldiers, judges, electoral administrators and the odd lost voter — drifted in and out of his office.

“We have created Tahrir here in our little school,” he said, grinning, while gesturing at the well-mannered chaos around him. “Did you see how far back the queue stretches?”

Mohamed ran for office as an independent in last year’s parliamentary poll. Mubarak’s ruling National Democratic Party — now dismantled — “won” 96% of the first-round votes in that campaign; this time, despite numerous local violations, systematic fraud did not seem to be woven into the electoral system.

But the new-found sense of freedom has not engendered widespread empathy for the continuing occupation of Tahrir and other city centres by demonstrators seeking to dislodge Mubarak’s generals.

“People here don’t feel as if the young people in Tahrir understand them, and they don’t feel as if Scaf [the Supreme Council for Armed Forces] understands them either,” said Mohamed. “Both those institutions feel so distant from everyday life in Duweiqa. The only people who these voters have day-to-day contact with are those handing out election fliers in the road.”

Hosni Mohamed, an imam in the local mosque, was one of those, quietly distributing leaflets for the Salafist Al-Nour party as locals joined the queue.

“Look around at the roads, the slums, the lack of infrastructure and healthcare. I have nothing against the liberals and the leftists who camp in the square [Tahrir], but when was the last time they were here? We see them in the news and they feel foreign and dangerous to us. People here crave security and tangible improvements to their lives and that’s what we can give them.”

A rival delegate from the Muslim Brotherhood’s Freedom and Justice Party, the only other political force that seemed to be campaigning in Duweiqa, concurred. “We participated in the revolution and saw a miracle; now this election is the next miracle,” he said.

“For several years the government has been absent here, just like the space where those rocks used to be. So we came in and built a book fair and a food distributor and we gave people blankets and clothes. And now we are saying give us your vote, and imagine what more we can do in Parliament. If the rock slide was a symbol of what went wrong under Mubarak, this poll is a symbol of what we can do to make things right.”

Back in Sayeda Zeinab, having finished voting, Magdy returned to the main square where, crowded on all sides by election posters, a photo of his son hung between two lampposts. He looked back at the polling station and then up at the poster of his son once again.

“The text below Tarek’s face is a poem, which begins: ‘In my heart is fire, lead and iron … and Egypt shall be dressed anew.’ None of this is perfect, but it’s something. Our country is making history once again.” —