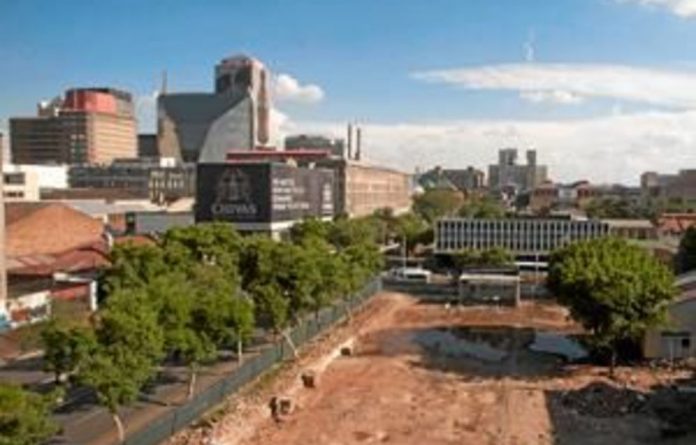 For a long time Newtown was the midwife to Jo’burg’s cultural rebirth, at least in the inner city, but it has been eclipsed by Johnny-come-latelies, such as Arts on Main on the eastern side of the CBD.

But Newtown’s supporters will not hear that the cultural precinct has failed and say that its very existence encouraged similar precincts in the inner city.

Sharon Lewis of the Johannesburg Development Agency says that “the initial success of Newtown in establishing itself as a cultural precinct might be the reason so many other precinct developers have picked up on the same theme”.

Arts on Main and newcomer Juta Street in Braamfontein have fewer constraints on their development — it has been easy simply to buy up several buildings and convert them. Newtown is a larger, more complex space, with its heritage legacy, public land and building restrictions.

Several years ago a cultural arc was proposed — a crescent stretching from Constitution Hill through Braamfontein and down to Newtown, which would be the city’s cultural precinct.

Back to life
There are now hopes that a new development — the conversion of the potato sheds behind Museum Africa into hotel, retail, office space and a possible call centre — will give Newtown a new push.

Developers Atterbury Properties are to pump R850-million into the development, to be called the Newtown Quarter, with construction beginning in early 2012. The development includes an upgrade of the Market Theatre — the Laager Theatre will be enlarged.

The vast 1913 Museum Africa building and its accompanying potato sheds are protected, meaning development has to have approval from the heritage authorities, which has slowed down the Newtown Quarter development, says project director Coenie Bezuidenhout.

Many buildings are council-owned and handing them over to the private sector for development is a laborious process. A 90-year lease for the sheds has been signed. Transport House, the huge shell of a building in Henry Nxumalo Street, is like a ghost, although it was recently sold by the city. Time-consuming rezoning requirements add to the frustration.

A regulation restricts the building height in Newtown to six storeys, to stop buildings from towering over the M1, and has further slowed down development. To make investments worthwhile, developers need to go higher to pack tenants in.

There are suggestions that the banks still redline the suburb, seeing it as high risk. The development of the silos off Quinn Street, which would have seen them converted into loft apartments, has stalled for this reason.

Old soul
Newtown can claim to be the womb of Jo’burg. The original town’s first bricks were made here — the Brickfields housing complex takes its name from this early industry.

And it was from Brickfields, an area where 7?000 people lived within 10 years of Jo’burg’s birth, that the city’s first forced removals took place — in 1904 a supposed bubonic plague broke out in Brickfields and its occupants were moved to Kliptown, Soweto’s first suburb. Brickfields was razed to the ground and Newtown rose in its place.

It was from here, at the Electric Workshop and Turbine Hall, that electricity was first generated for the growing town. Workers at the power station were housed in the present Workers’ Museum.

The building has endured as a memorial to the inhumane conditions under which they lived, sleeping in rows of concrete door-size beds in overcrowded dorms.

Here it was that Mary Fitzgerald, the town’s fiery trade unionist, led marches. She won a seat on the council in 1915 when women in South Africa did not have the vote.

But development has taken place. The three-storey office building Central Place went up in 2005. This attracted A-grade office development by AngloGold Ashanti with its classy conversion of the electric workshop in 2007. In 2005 the Brickfields flats were built, catering for the upper working class. Phase two will begin in 2013.

A quiet buzz
The building of the Nelson Mandela Bridge in 2003 — and new on- and off-ramps from the M1, leading directly into Newtown — promoted development. The square has undergone several upgrades, with the latest softening its edges with grassy patches.

Lewis says that Newtown shouldn’t be underestimated. “There is a quiet buzz in Newtown all the time,” she says.

Students at the Market Theatre’s Photo Workshop and Market Lab come and go and tourists turn up every day for the Newtown heritage tours. The theatre has drawn almost 80?000 people this year.

Other attractions are the Dance Factory, the Sci-Bono Discovery Centre and the SAB World of Beer. The square hosts several big events annually, including the Joy of Jazz and Diwali.

“There is a steady trickle through it. In two or three years there’ll be a big turnaround,” she says.

Newtown is registering as a city improvement district (CID). Once in place it will compel all property owners to contribute to maintaining the suburb. Architect Nicholas Sack, spearheading the registration, says the district is being extended to embrace Quinn Street, thereby incorporating more businesses and therefore more revenue for the CID.

But what Arts on Main and Juta Street don’t have is the recently announced national arts and culture subsidy. Serious money will be pumped into Newtown. “Once it is up and going, it will have a great impact