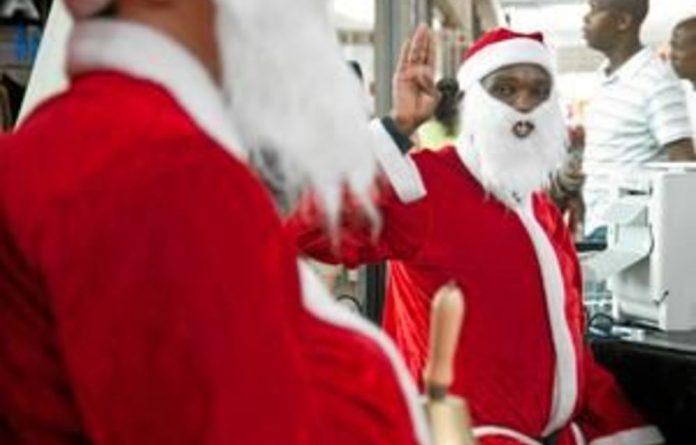 It is a black and white Christmas at Soweto’s Maponya Mall this year. At the entrance two versions of Santa Claus are vying for the attention of a restless queue of children. One Santa Claus is young and white, with a cushion stuffed under his red tunic to make his tummy big. The other Santa is also young and cushioned, but black.

It is clear which one the kids prefer. “This is really ironic. We’ve always had a black Father Christmas, but [this year] parents and children want a white one,” said Mandisa Mzizi, Maponya Mall’s marketing manager.

Mark Kidd, a tenant at the mall, initiated the annual visit of Santa Claus last year. He told the Mail & Guardian that he didn’t want to discuss the current “black and white issue” because “I don’t want you to make it political”.

By now it’s 2pm and the place is crammed with mothers on the hunt for festive bargains.

“I am looking for specials on kids’ clothes, because the children want to wear new outfits at Christmas and New Year,” said shopper Kate Mosima.

Other Maponya shoppers told the M&G that Christmas brought “a lot of burden”, with some families starting to save in January for the end-of-year celebrations.

But Mzizi said that sales were healthy, in spite of tough economic times. She believed a festive environment encourages consumers to forget their financial woes and said that Christmas decorations were a psychological “appetiser”, because they tell consumers: “It’s the festive season! Spend more!”

“It would be a blunder for the mall not to get into the hearts of the people,” Mzizi said.

Christmas décor at Maponya is strictly traditional. Western traditional, that is.

Most shops have a brightly lit Christmas tree in their doorway and colourful stars and glittery balls dangling from the ceilings. But you won’t hear Boney M at this mall. Maponya’s Christmas soundtrack includes popular Durban kwaito music and Afro-pop from Zahara.

Across town, at glitzy Sandton City, the theme is gold — and more gold. Instead of a Christmas tree, a mammoth golden rhino dominates Mandela Square. Even Santa’s sleigh is glittery.

Swain, like Mzizi, believed the decorations have an impact on consumers. “Although we have not undertaken any studies, we feel they [decorations] play a vital role in creating a festive atmosphere that shoppers enjoy and expect,” she said.

For Swain, however, it is important not to overdo it. That’s why the tone this year is “understated”, in line with the “new, modern feel of the centre”.

Sandton City has got it right, if new consumer research is anything to go by. In an article in Marketing Daily, a British online publication, Oxford-based academic Nancy Puccinelli warned that too much Christmas spirit can be a consumer turn-off.

“It is short-sighted to generalise about consumers and how they might behave when surrounded by enforced holiday cheer,” Puccinelli wrote. “We know from studies of consumer behaviour that moderation in festive décor leads consumers to spend more and to like the retailer more,” she said.

Sandton’s resident Father Christmas (otherwise known as “Bhundu” Conradie) agreed that times have changed, especially now that children are becoming more techno-savvy. Forget the traditional ink-smeared request letter; these days Santa is more likely to be contacted by email or on Facebook.

Christmas wish lists have changed too, he said. But not in the way you’d expect. This year “horses and hamsters are topping the demand list”.

Conradie gently cradles a toddler on his lap. The little girl looks a bit overwhelmed and starts to cry. Conradie smiles as he comforts her. He has seen it all before.

“Every year, I see how the little ones have grown,” he said.

“The two year-olds are scared of Santa, but as they get older, they become more comfortable. They come running to me.”

Consumer activist calls for boycott of the malls
Cape Town activist Mark Weinberg will not be doing his Christmas shopping at the upmarket mall Cavendish Square this year, or any other year, for that matter.

“Malls have become obscene temples of consumerism,” he said.

In October Weinberg launched a Facebook group to persuade others to follow his example. The “Christmas shopping? Boycott the malls!” group now boasts 350 members, all keen to spread festive cheer by supporting small traders and crafters. Gift ideas range from handmade bags and jewellery to fresh fruit and vegetables. You can even learn how to make your own jam and package it in recycled glass jars, which — of course — you decorate yourself. Anything goes, as long as it is local.

“The starting point should be the recognition that Christmas is one big rip-off,” said a member of the Facebook group. “Having said that, I applaud the initiative to showcase smaller independent producers to help sustain their growth. We should do it all year.”

Weinberg pointed out that in December people rush blindly to the malls in search of ­inspiration, but “most of the time we buy things we don’t need”.

“What we are saying to consumers is: don’t just buy on impulse, let your gift be thoughtful and meaningful.”