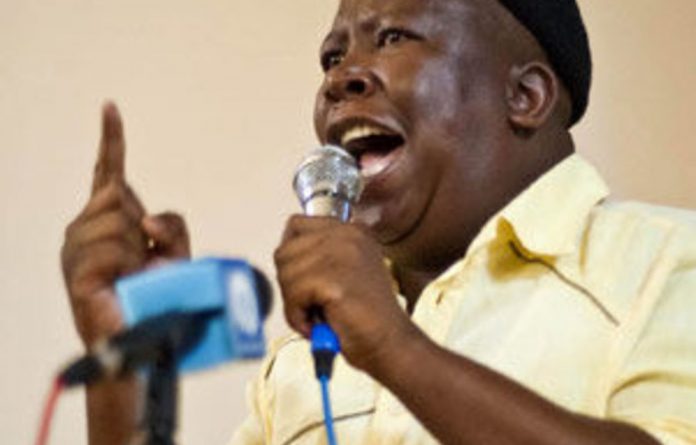 Embattled ANC Youth League president Julius Malema on Friday shared his views on economic freedom, while reminding supporters to celebrate the ANC’s centenary regardless of any issues with the party’s current leadership.

“The ANC is not one person — it is all of us. We must be happy and celebrate so that we can start building for the next hundred years,” he said.

On Sunday the ANC will celebrate its 100th anniversary in Mangaung.

More than 40 current and former heads of state is expected to be present, along with approximately 100000 party supporters.

“Sunday is no time for political horse trading, that time is still coming. Go out and enjoy yourself. Celebrate the ANC,” he said.

The pair’s comments come at a tense time within the ANC. As President Jacob Zuma pushes for a second term as party president, Malema and Mbalula form part of a faction aiming to replace him at the next elective conference in December.

Similar fate
The venue for the rally is the birthplace of former ANC President Dr JM Moroka.

Moroka replaced AB Xuma as president in 1948 after the latter clashed with the then newly formed youth league. He failed to support a league resolution to take up arms in the struggle against apartheid.

On several occasions Malema has compared Xuma and Zuma, saying Zuma may face a similar fate.

“This business of expelling people you don’t agree with is nonsense. We must deal with things like this politically,” Malema said.

Malema also said he wants to see white domestic workers in South Africa in the next 10 years.

Currently whites controlled everything from the means of production and mines to banks and labour, he told the crowd.

“That must change. We want to find in the next 10 years white domestic workers,” he said to deafening applause from locals.

He said the youth league’s call for “economic freedom” should not be viewed as a way of excluding whites.

“We never said they must be sent to sea. We just want to share the cake.”

Malema spoke of black people’s struggles, some of whom converted their kitchens into bedrooms at night, shack dwellers who never celebrated when it rained because the structures leaked, and those who barely had anything to eat at home.

Malema, who bought a house in Sandton, Johannesburg, for R3-million, and was rebuilding it for R8.5-million, said he didn’t have to stay in a squatter camp to know the struggles people there faced.

“I am a child of a domestic worker.”

He said the history of the ANC was to fight for “economic freedom” and that Zuma should, in his January 8 address, speak about providing houses, water and sanitation.

“I am not in the struggle for a position. That is why we don’t care whether we are suspended or not,” he said.

Earlier in the day, Zuma conducted surprise door to door visits across Botshabelo township some 15 kilometres away from Malema’s rally.

Zuma received a mixed welcome. Some residents were eager to relay their issues concerning service delivery to the president, which Zuma promised to act upon, while others, wearing youth league T-shirts, jeered as Zuma made his way across the township. — additional reporting by Sapa