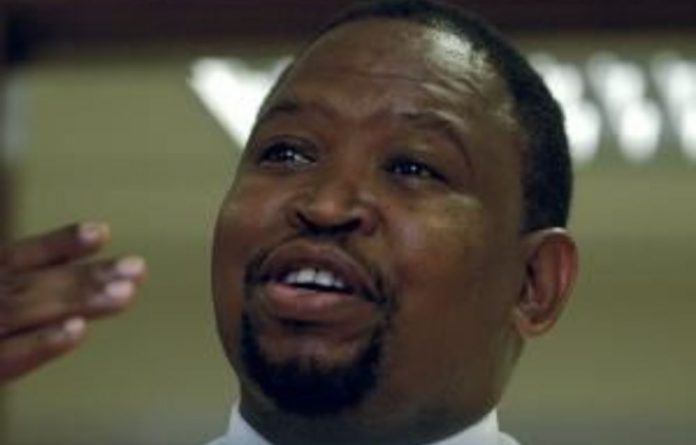 The former deputy minister of economic development Enoch Godongwana told the Canyon Springs Investments 12 insolvency inquiry he and fraud-accused Richard Kawie had been in the habit of loaning each other money, without drawing up loan agreements.

Asked to explain a mystery R510000 cheque made out to E and T Godongwana from one of Kawie’s companies on Friday, Eclispse Capital, Godongwana was unable to recollect banking the cheque.

In any event, he pointed out, he and his wife did not have joint accounts.

The inquiry is trying to follow the trail of R100-million of factory clothing workers pension fund money, which was mysteriously loaned to Canyon Springs, a company in which Godongwana and his wife Thandidwe have a 50% shareholding in a family trust.

While Godongwana resigned from his top post two weeks ago, with government officials claiming his sudden exit was due to pressure in government circles over the loss of the pension fund money, Kawie was arrested shortly before Christmas for fraud involving the pension money. The former union consultant to the Southern African Clothing and Textile Workers’ Union (Sactwu) is believed to have been the key facilitator in the loan of the provident fund money to Canyon Springs.

Kawie’s three companies have been the subject of intense investigation by the inquiry, and his bank accounts were subpoenaed to help unravel the mystery of the missing pension fund money.

Forensic investigators involved in the inquiry have suggested that Kawie’s companies could have been used for laundering money.

No loan agreement
Godongwana told the inquiry that Kawie, who is out on bail, had contacted him on Wednesday this week.

Godongwana claimed that the suggestion had come from Kawie that he draw up a loan agreement to account for the unexplained R510000 cheque, which he said he had not agreed to do.

“So you weren’t prepared to go along with the proposal put to you?” asked advocate Gavin Woodland SC, representing Sactwu.

“No,” responded Godongwana, shaking his head. Woodland said this would have amounted to Godongwana perjuring himself.

In outlining why some of his R1.5-million annual salary as director of Canyon Springs had been paid through Kawie’s companies, Godongwana said this had happened because he had decided to personally invest in a construction project in KwaZulu-Natal, which Kawie was running.

Woodland asked Godongwana why he had not simply taken his salary from Canyon Springs, and handed the money to Kawie.

“Because he [Kawie] was leading the project,” said Godongwana. “It never occurred to me that there was a problem to be doing it this way.”

Godongwana told the inquiry he had later asked for his money to be repaid. “The project failed and it was kicked off site,” he said.

Neither of the men ever drew up loan agreements when they loaned each other money, said Godongwana.

No recollection
Woodland pointed out that when Godongwana gave evidence to the inquiry last year, he had said he had not received his R1.5-million annual salary from another source, other than Canyon Springs.

“When you were asked whether you were being paid from another source, you said no,” said Woodland.

Godongwana did not explain the discrepancy, and said he could not recollect what had been said when he had given evidence at the inquiry last year.

The Mail & Guardian can confirm that Godongwana made his appearance before the inquiry in November, shortly before the bank accounts of Kawie’s companies were subpoenaed by its lawyers.

These payments were made to him over a period from April 2007 to March 2009. The first payments from Kawie’s Eclipse company started in April 2007, which was seven months before he joined Canyon Springs.

His wife, Thandiwe, received three payments from Kawie’s Empirax company, totalling R265 000. These payments were made to her between May to July 2009, after she became a director at Canyon Springs.

Explaining that he had given up his role at Canyon Springs when he moved to Parliament, Godongwana said his wife had assumed the position as director of the company, and represented his family’s 50% shareholding in the company.

In discussing loans made to different companies by Canyon Springs, which the inquiry heard were now largely irrecoverable, Godongwana said he had found out about the loans after they had been made.

“I always thought it was a genuine loan and that it was going to be paid back,” he told the inquiry.

Godongwana told the inquiry that the disappearance of the money had led to some introspection on his part.

‘Good faith’
“I ended that business in good faith and developed trust in the relationship. I did not know it is a scheme, as it is,” said Godongwana. “I take the view that based on the matter of principle and conscience as a former unionist, I do not want to the involved in a scheme that has led to the loss of money for union workers.”

As a result, he said he was offering to repay any money that he and the inquiry investigators agreed he should not have received.

Dressed in a black jacket, pink shirt and jeans, Godongwana appeared relaxed during his appearance before the inquiry, and joked with journalists during breaks for tea.

“In a couple of months I will no longer be newsworthy because the arms deal is coming up,” he laughed.

Godongwana told the press outside the inquiry he was currently “unemployed”.

Asked by the M&G if he was going to simply focus on his ANC work, as had been claimed when it first emerged he had quit his job, Godongwana said he would have to look for another source of income. “As you know, the ANC doesn’t pay for this work,” he joked.

Godongwana was accompanied by his wife Thandiwe, dressed in fuschia pink, who waited outside while he gave evidence.

In her brief testimony, Thandiwe told the inquiry she had never loaned any money from Kawie.

Confirming the information given to the inquiry by her husband that Kawie had contacted him this week to try to get him to draw up a loan agreement to explain the R510000 cheque, she also said she could not recollect receiving or banking the cheque.

The cheque was a mystery to her too and she said the couple did not have a joint bank account, which does not explain why it was made to both E and T Godongwana, and banked.

Inquiry lawyers will now attempt to establish with the Godongwanas whether this cheque was banked into one of their accounts.