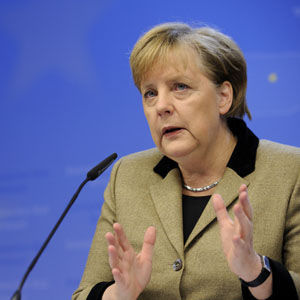 Germany’s campaign to set the terms for saving the euro was heading for success on Monday with EU leaders edging towards agreement on a new “fiscal compact” for the single currency zone enshrining Berlin’s insistence on rigour and discipline and establishing a new punitive regime for budgetary profligacy.

But as Chancellor Angela Merkel prepared to return to Berlin with the new treaty in the bag, she also appeared more isolated in Europe in her hard line on Greece and over how to save the bankrupt country from defaulting on its debt.

All EU countries except Britain looked likely to sign up for the new pact, although Poland and France were at loggerheads over who would be allowed to take part in the twice-a-year eurozone summits, a feature of the new regime.

President Nicolas Sarkozy sought to restrict the summitry to the 17 members of the eurozone, while Poland’s Prime Minister Donald Tusk insisted that non-euro countries who sign up to the new pact should be allowed to attend.

“It’s very symbolic,” said a senior EU diplomat. “A matter of national flags and national pride for the Poles.”

The treaty for the first time empowers the European court of justice as the enforcer of fiscal rectitude in the eurozone, makes it possible to levy quasi-automatic fines against countries in persistent breach of the new rulebook.

Ostracised
While the impact of the treaty will not be felt in the short-term and will have little impact immediately on Greece’s plight or Europe’s sovereign debt crisis, Berlin insists it is needed to resolve the fundamental issue of excessive indebtedness in part of the eurozone. The move will prevent a rerun of the crisis and it should have a calming effect in the bond markets.

While the rest of Europe reluctantly bowed to the German agenda, Berlin, however, found itself increasingly alone on how to fix Greece.

Anger in Athens over leaked German proposals that Greece should surrender power over its budget to the EU since it was incapable of delivering on its bailout pledges mushroomed into strong criticism from some of Berlin’s habitual allies.

Helle Thorning-Schmidt, the Danish prime minister who has taken over the EU presidency, said that Brussels would defend Greece against any assault on its democracy, a reference to the German demand for Athens to forfeit control over budget policy. The Austrian chancellor, Werner Faymann, who has been on the German side of the creditor-debtor argument for the past 18 months, was also critical of Berlin.

“You mustn’t insult anyone in politics,” he said. “That always leads in the wrong direction.”

Jean Asselborn, Luxembourg’s foreign minister, went further. “It’s not in order that German politicians say that we need commissars and that Greece be put under supervision — The biggest country in the EU, Germany, should be more careful.”

Merkel beat a hasty retreat from the German demands for a takeover of the Greek budget, declaring that “we are holding a discussion that we should not be holding — We don’t want a controversial discussion but one that is successful, for the people of Greece.”

Compliance
Despite being the most pressing issue facing the EU, Greece was kept off the summit agenda which, apart from finalising the fiscal pact, largely focused on a debate about how to create jobs and stimulate growth in the EU while implementing spending cuts and ruling out public spending on soaring unemployment.

EU leaders are waiting for a report on Greece’s compliance with the terms of its bailout — expected to be very critical — from the European commission, European Central Bank and International Monetary Fund before deciding what to do about a second €130-billion bailout which needs to be launched in March to avoid a Greek default.

The talk in Brussels was that another eurozone summit could be called next week to focus on Greece.

Acquiescence to Berlin on the new stiff fiscal rules may make it easier to come up with more help for Greece, as well as strengthening the firewall of bailout funds needed to stabilise the euro and ward off the risk of contagion spreading from Greece to Italy and Spain.

The view in Brussels and other EU capitals is that Merkel needs the new euro regime to demonstrate to German public opinion and Parliament in Berlin that the rest of the eurozone has adopted sound and strict rules before she can sanction increased aid for Greece.

She is also keen to get the new system established before the decisive round of the French presidential elections in May since the leftwing frontrunner, François Hollande, has pledged to renegotiate the pact while outlining public spending plans that could put France in breach of the new rules.

Victory for Hollande could yet upset the calculations in Berlin since France is unlikely to ratify the new deal in the National Assembly before the presidential contest is settled. —