Finnish polls show Niinistoe in the lead for presidency 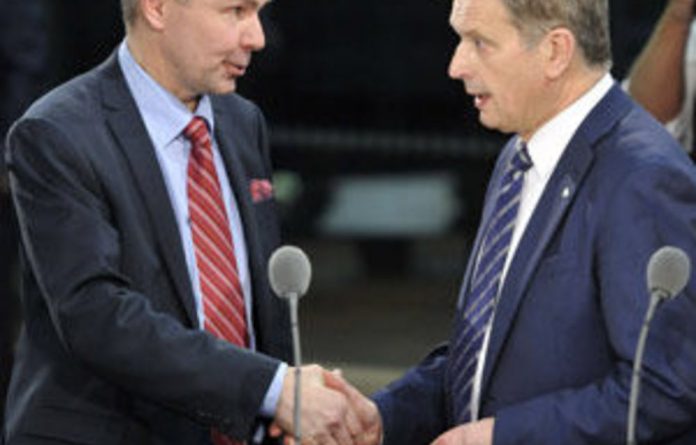 Conservative Sauli Niinistoe is on course for victory in the second round of Finland’s presidential vote on Sunday, with polls giving him a wide lead over Green liberal challenger Pekka Haavisto.

Niinistoe’s experience as finance minister has lent his candidacy credibility amid the European debt crisis, while Haavisto’s openly gay stance has lost him support among older and more traditional Finns.

The most recent public opinion poll published on Thursday gave the National Coalition Party’s Niinistoe 62% support against 38% for the Green League’s Haavisto.

In the first round of voting on January 22 featuring eight candidates, Niinistoe (63) who survived the 2004 Indian Ocean tsunami in Thailand by climbing a tree, garnered 37% of votes and Haavisto 18.8%.

Niinistoe has consistently trounced his challenger in the polls — largely due to his long tenure as finance minister from 1996 to 2003, when he helped usher Finland into the eurozone — particularly in the first round campaign, when the Euro crisis was cited as voters’ main concern.

Down to sexual orientation
Both candidates are strongly pro-Europe and agree on most other aspects of foreign policy — one of the few areas the president still decides upon — with pundits noting that the real fireworks died when the virulently anti-Euro candidates were eliminated after the first round of voting.

Rather, the candidates’ sexual orientation was turning out to be a key factor, analysts observed.

Haavisto is in a registered same-sex relationship with an Ecuadorean hairdresser, while Niinistoe enjoyed a romance with an ex-beauty queen turned parliamentarian and is now married to his party’s press officer, a woman 29 years his junior.

Some 36.5% of an eligible 4.4-million voters have already cast their ballots in advance voting and final results are expected around 8pm GMT on Sunday.

Analysts were optimistic that voters would turn out despite a wave of Arctic cold sweeping in from Siberia and plunging temperatures in Finland as low as minus 40 degrees Celsius over the weekend. –Sapa-AFP

Denise Wall
Denise Wall works from London. Pharmaceuticals reporter for the Wall Street Journal. Got a story or a tip?Email me at [email protected] Views my own. Denise Wall has over 2350 followers on Twitter.
Facebook
Twitter
WhatsApp
Linkedin
Email
Telegram

Continuity is key to fixing education

Get up, stand up: Jamaica rises

‘A black coach doesn’t say no to Europe’: What happens next for Daniel Amokachi