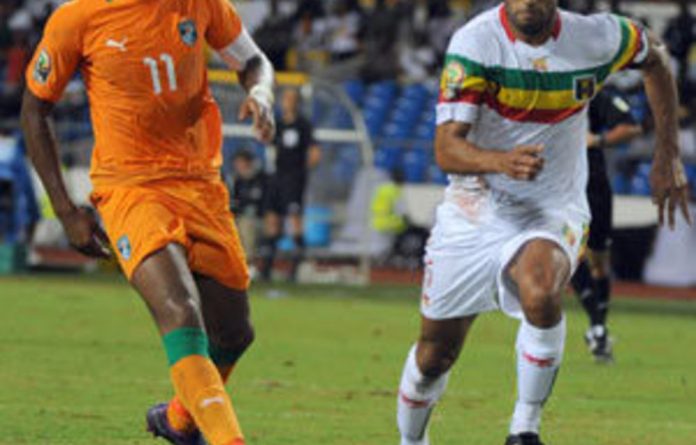 A contender for the goal of the competition from Arsenal forward Gervinho against Mali on Wednesday put Côte d’Ivoire into the Africa Cup of Nations (Afcon) final.

Gervinho’s solo moment of brilliance deep into the first half gave the Elephants a 1-0 win and left them on a collision course with Zambia, shock winners over Ghana in the day’s other semi-final.

The pair meet back at Libreville’s L’Amitie stadium on Sunday.

For the Ivorians, this will be their first appearance in the Nations Cup climax since they were beaten by Egypt in Cairo in 2006.

They are seeking their second continental title after a lone success 20 years ago.

Winning coach Francois Zahoui said: “We had to manage some difficult times but luckily we scored just before the end of the first half. I’m proud of the boys, they managed the game with calmness and patience, and a little stress.

“We weren’t expecting such a tough game. I’m surprised by the work [Mali coach] Alain Giresse has done with his team, hats off to them.”

“We had some players missing, we tried to get along with what we had,” said Giresse.

“We almost succeeded, we could see the difference of a team with many experienced players and a developing team like ours.”

Mali had struggled manfully to keep the orange tide at bay in a frenetic first half, until Gervinho made his mark with a little help from some slack defending.

Depriving Mali back Ousmane Berthe of the ball bang on the halfway line, the Gunners star scampered hare-like down the left wing, leaving Malian pursuers in his wake to shoot right-footed past Soumaila Diakite and into the far corner.

Giresse pounded the dug-out with his fist in frustration.

The Ivorians went into this semi-final looking to avoid the same fate as Ghana, the Black Stars having been knocked out by so-called minnows Zambia across the border in Bata earlier.

Mali made two changes from the side that won Sunday’s stamina sapping quarter-final against Gabon, with French-based forwards Cheick Diabate and Moustapha Yattabare in for injured duo Abdou Traore and Modibo Maiga.

With Pele among the crowd at the three-quarters-full 40 000-seater stadium, Didier Drogba almost put the Elephants into a fifth-minute lead when he hit the crossbar.

Berthe was booked seconds later and goalkeeper Diakite had to look sharp to punch away the resulting free-kick taken by the Ivorian skipper.

Côte d’Ivoire could have been two up inside the opening quarter of an hour but Yaya Toure followed his captain’s lead by also hitting the woodwork, after being set up by Kalou.

Holding firm
Drogba was then off target when he dragged his angled shot wide from the right after getting the better of his Mali markers Berthe and Drissa Diakite as he ran on to a long ball into the area.

In the last minute before the break, Gervinho struck to give his team a deserved lead.

Mali came out for the second half with an unenviable task — to become the first team at the tournament to score against Drogba and company.

But only Diakite’s fingernails prevented them falling further behind around the hour when the Mali keeper diverted Kalou’s shoot over the crossbar.

Yatabare had Mali’s best chance in the 72nd minute, his attempt from the right narrowly going over Boubacar Barry’s bar.

But the Ivorians held firm to march on while Mali head honourably to Saturday’s third place play-off. — AFP