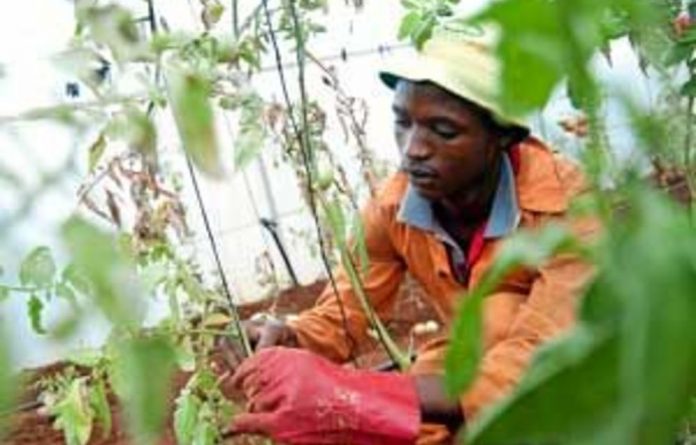 It took just two years for 27-year-old Sifiso Mthethwa to work his way up from clearing rubbish from plant beds at an agricultural site in Orange Farm, Johannesburg, to becoming a team co-ordinator. He heads a group of 25 people who are participants in the community work programme, which has 74 sites across South Africa.

Whatever the weather, they arrive to tend vegetables — clipping, weeding, irrigating and raking. “When you are committed to a plant, it is like your lover. When you are away, you think about how it is doing,” Mthethwa said.

He is one of more than 100 000 people who are guaranteed work twice a week at a wage of R60 a day. Based on a model in India, the programme does not offer full-time employment, but acts as a safety net for the poorest of the poor. Its priority is to give each participant 100 days of work a year, gradually creating a pool of semi-skilled labour and closing some of the inequality gaps created by unemployment.

The programme is an outcome of a review, commissioned by the presidency, to establish the reason why government strategies targeting poor and marginal areas were not delivering results.

Housed in the department of co-operative governance since 2010 and part of the R73-billion expanded public works programme, it uses public employment as a catalyst for community development. It ties in with the national development plan goals and the new growth path target to create five million jobs by 2020.

This year almost R650-million was allocated to the community work programme, which has been gaining importance in growth policies.

Public employment
Funding for the programme is expected to increase when Finance Minister Pravin Gordhan presents his 2012 budget next Wednesday.

In July last year the Cabinet approved a target of one million participants by 2013-2014, which would effectively double the current level of public employment. But this target has since been pushed back to 2014-2015, although it still remains ambitious.

Kate Philip, an adviser to the presidency on short-term job creation, said it was achievable but would require a “big push”. It also depended on whether the resources were made available for this scale of expansion.

In the medium-term budget framework, the treasury indicated that funds would only be made available to expand the programme to 250 000 participants by 2014-2015, far short of the one million target.

A lot depends on the programme’s performance. If it can expand its operations significantly in the coming year, a case could be made for an increased allocation in the next budget round.

This year is therefore critical for the future of the programme and next week’s budget will dictate the progress that can be made in the coming financial year.

The work most urgently needed by each community is assessed through local participation and the programme is implemented by non-profit organisations. Local authorities and stakeholders help to select the participants, who are relatively few, given the large number of job-seekers. Sites and activities include agriculture, home-based care, teacher assistance, park rehabilitation and building.

Food on the table
Thembisile Ndlovu, a 26-year-old mother of two, works at sites in Protea, Soweto. Her group’s activities include cleaning the municipal hall, helping out at a nearby crèche, tending food gardens and providing home-based care for the sick and frail. It is her first job.

Before she joined the programme in 2010, Ndlovu survived on child grants — R270 for each. The extra R480 from the work “makes life a bit easier and at least it brings food to my table”, she said. On the remaining days of the week, Ndlovu and others in her group recycle bottles to earn a little more.

Food security has been a major focus of the programme and vegetable gardens have been created at most of the sites.

That was probably because the programme was run in communities in which people were most likely to suffer from hunger, said Philip.

The programme delivers the produce to institutions in need, such as schools and orphanages. Sometimes there are surpluses that can be sold to generate income for the programme.

“It certainly raises some policy issues about how it should best be used, but the programme is not intended to become self-sustaining,” said Philip. Otherwise the structure is rigid: 65% of costs are for labour and the balance is used to buy supplies and other necessities.

In their spare time, the members of Ndlovu’s group focus on community development through a non-profit organisation they have formed.

Mthethwa and his group of workers have formed a co-operative that aims to produce and sell food seven days a week. The major problem is to find land.

“When we move on, we will probably stop working here, but there are lots of people in the area who can move into our places and benefit.”

He said that once the wheels started turning and a project became viable, the community support was overwhelming.

“People love progress in their communities. Once they see progress, they want to get involved and become committed.”