Malema promises to fight for land reform — at any cost 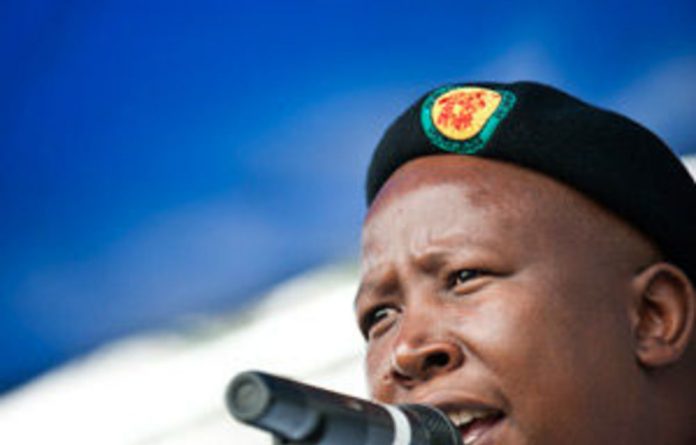 ANC Youth League president Julius Malema has once again weighed in on the land reform debate on Sunday, saying the league will take up the charge to return land to its “rightful owners”.

“The right-wingers are saying we don’t own parts of this country because they know the radical voice in the ANC is banned,” Malema told a meagre crowd of supporters at mini-rally the league organised in Soweto as part of their ANC centenary celebrations.

Malema was referring to controversial statements made by Freedom Front Plus leader Pieter Mulder in Parliament two weeks ago in which he claimed “bantu-speaking” black South African do not have a claim to up to 40% of South Africa’s land tracts.

President Jacob Zuma sternly rebuked Mulder in his reply to the state of the nation debate amid calls for the president to dismiss him as agriculture, forestry and fisheries deputy minister.

Land ownership is a thorny issue in South African politics, with government claiming that up to 87% of South Africa’s agricultural land is still in the hands of white farmers.

Government’s original plan to have 30% of disputed arable land diverted back to the black majority by 1999, has failed.

‘Rightful owners’
There are plans to speed up land reform, with a green paper on the issue being formed by the department of rural development and land reform to address outstanding issues.

The details contained in the green paper are unclear at this stage, and apart from Zuma stating the willing buyer, willing seller system is “not working” in his State Of The Nation address, government has remained mum on their exact mode of action.

However, Malema told supporters the youth league would take up the charge to return the land to its “rightful owners” as soon as possible.

“The settlers committed a black genocide and made the black land owners into slaves. We’ll pay whatever price for this land. If the leaders of this revolution are not prepared to fight for this land, the economic freedom fighters will,” Malema said.

Suspensions still looms
The youth league may find it difficult to enforce any meaningful program of land reform in its current position, as Malema and several other leaders are facing suspension and possibly expulsion from the ruling party.

Malema along with league spokesperson Floyd Shivambu and secretary general Sindiso Magaqa have been arguing in mitigation of their suspensions, which were handed down to them by the NDC in November last year.

The ANC have also been allowed to argue mitigating factors, and have allegedly requested Malema to be expelled.

In reiterating calls for a political solution to the ensuing battle between the ANC and the league, Malema again reminded supporters the league was being “persecuted.”

“We and our families are being tortured by those calling themselves comrades. I thought it was only the boers that did that but there are people in the ANC out to make our lives difficult,” Malema said.