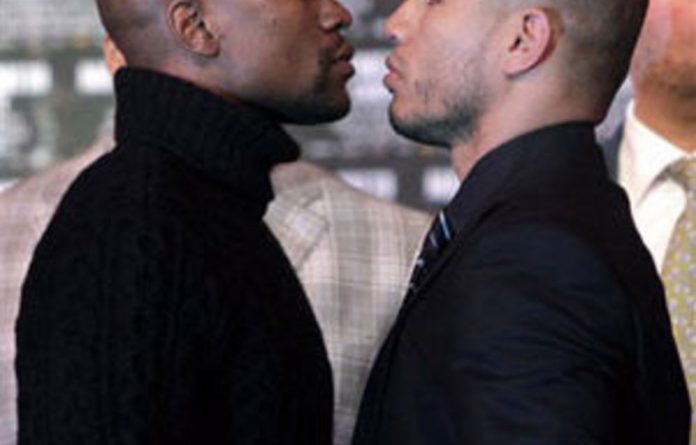 A trumpet blared a fanfare to introduce Floyd Mayweather Jr and Miguel Cotto as fans at the Apollo Theatre cheered the start of Tuesday’s news conference to promote their May 5 fight in Las Vegas.

Still, there appeared to be far more interest in the fight that’s not happening — a matchup between Mayweather and Manny Pacquiao. Mayweather made clear that whether they meet in the ring is about the money — breaking down the shares in what could be boxing’s richest fight ever.

“Just by speaking to Pacquiao on the phone, I mean, he’s not one of the sharpest knives in the drawer,” Mayweather said. “He faces Floyd Mayweather, he’s not getting 50-50. Not at all. No one is getting 50-50.”

While Mayweather urged Pacquiao should “take the test,” a reference to his demand for random drug testing, payout appears to be the real sore point between Mayweather on one side, and Pacquiao and Top Rank promoter Bob Arum on the other. Arum has said testing is not an issue.

Money, money, money
Mayweather says he’s not ducking Pacquiao, who stopped Cotto in the 12th round of their November 2009 fight.

“If I’m scared and I’m a coward, why do you guys want to see me fight?” he said. “Do I want the Pacquiao fight? Absolutely. But it’s going to be hard to make the fight because Arum is worried about getting money.”

As boxing news conferences go, this was fairly tame. In the second of a series that began on Monday in Puerto Rico and end on Thursday in Los Angeles, Mayweather and Cotto praised each other and said they respected each other. Video projections proclaimed them “Ring Kings” and “Living Legends.” They sat in tall chairs of red velvet with lions on the arm rests.

Mayweather was the snazzier, in white jeans, a black turtleneck sweater and sunglasses. There was bling on his left wrist, and the rapper 50 Cent was part of his onstage entourage. Cotto, who got the bigger cheers, was in a black suit, black shirt and striped tie.

Mayweather defended his February 13 tweet, in which he said: “Jeremy Lin is a good player but all the hype is because he’s Asian. Black players do what he does every night and don’t get the same praise.”

No regrets
Mayweather said most of the focus was on the second sentence and the first was largely ignored.

Cotto, who has stopped all three of his opponents since losing a welterweight title fight to Pacquiao, thinks the 154-pound weight limit will favour him over Mayweather, who has boxed at lighter classes.

“Power is going to be on my side,” Cotto said.

The fight, for the WBA super welterweight title, will take place in Las Vegas and will be televised by HBO is pay-per-view. HBO plans a four-episode series leading up to the bout, with the first part to air April 14.

Mayweather is to begin a 90-day jail sentence on June 1 stemming from a domestic violence case. — Sapa-AP

Slice of life: The fight in me