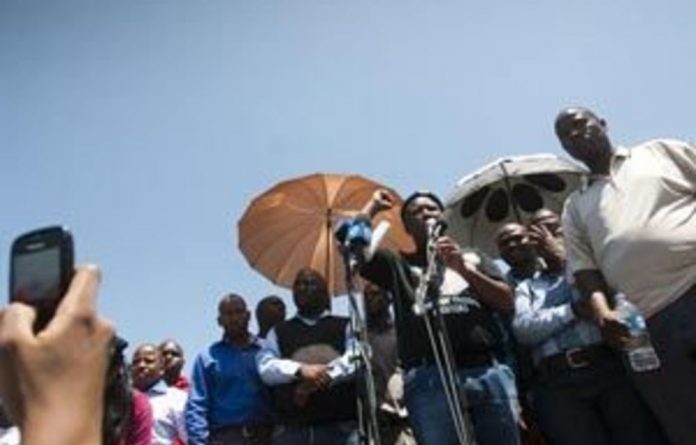 Some of Jacob Zuma’s opponents within the ANC spent the weeks leading up to Julius Malema’s expulsion from the party on Wednesday preparing the ground for a broader coalition to contend for top posts at the party’s December elective conference in Mangaung.

Malema was widely seen as the face of the campaign to topple Zuma and replace him with ANC deputy president Kgalema Motlanthe. But the Mail & Guardian has established, while national attention was focussed on Malema, a lobby group, which consist of ANC provincial leaders attempting to mobilise ANC branches behind close doors to replace Zuma with Motlanthe and party secretary general Gwede Mantashe with Sports Minister Fikile Mbalula.

ANC sources close to the lobby group which is sympathetic to Motlanthe and Mbalula told the M&G that provincial leaders, from the Eastern Cape, Limpopo, KwaZulu Natal, Free State, North West, Mpumalanga, Western Cape, Northern Cape and Gauteng have held several meetings in an undisclosed place in Johannesburg over the past few months working on a strategy to remove Zuma and Mantashe. The lobby group, according to ANC sources was formed soon after Malema and other ANCYL leaders were charged by the ANC for bringing the party into disrepute.

The lobby group has been discussing the possible inclusion on a rival slate of the ANC top six of Planning Commission Minister Trevor Manuel for the position of treasurer general, Lindiwe Sisulu as deputy president and Gauteng chairman Paul Mashatile as ANC chairperson, but there is noindication that any of the three have agreed to accept nomination, or that they are affiliated to the group in any way.

The M&G has been told by sources close to the anti-Zuma group that Motlanthe, who was initially reluctant to challenge Zuma, is now prepared to contest Zuma for the top ANC post. He has, however, given no public indication of his position.

Meanwhile, the ANCYL has vowed to fight to the end to defend Malema.

The ANCYL in at least two provinces has vowed to defy the ANC disciplinary committee’s decision to expel youth league leader Julius Malema from the party.

On Thursday, the ANCYL in Limpopo, which is Malema’s home province, and the Western Cape told journalists that it was business as usual and they will continue to consider Malema their leader.

Coordinator of the provincial task team that is running the affairs of the league in the Western Cape Senzeni Mphila charged that if the ANC expel Malema it might as well expel all of the league’s members.

“If you are expelling one of us, representing our views, all of us must go,” said Mphila.

But this was not the same as disbanding the league, he added. Only dysfunctional structures were disbanded and the youth league “is alive and doing its work”.

He added: “It›s very clear that there cannot be anyone else who can represent the youth league at ANC NEC meetings but our president and secretary general (Sindiso Magaqa). “That is stipulated in the ANC constitution— and we are not prepared to send anyone else, but them.”