Art as an Olympic event 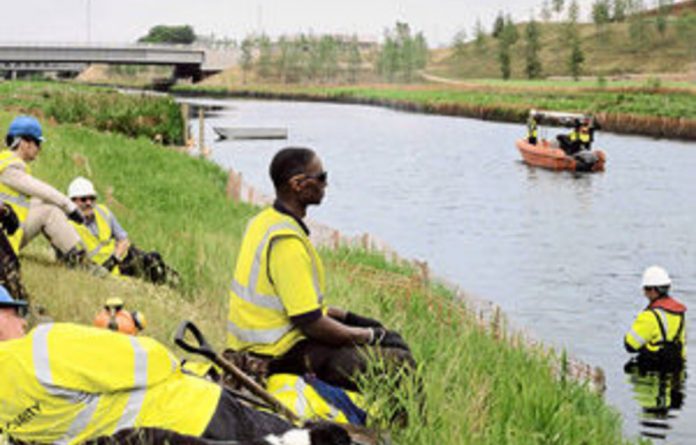 South African-born artist Neville Gabie recently completed a 16-month term as artist in residence at London’s Olympic Park. His remit was to make the preparations for the London Olympics during the final phase of construction “visible to a wider non-park audience”.

“I was given access to the park and venues to respond to what was happening,” says Gabie.

“But I needed to keep some distance, some objectivity — a critical stance. I think that’s quite important to any residency”.

One of the works Gabie produced is Freeze Frame, a photographic recreation of Seurat’s painting Bathers at Asnières, featuring workers from the Olympic site. Gabie recalls the landscape architects showing him visualisations of the park and ­noticing an incredible similarity to Seurat’s landscape.

“There was a relationship of the river to the riverbank. There’s a bridge in exactly the same place in the two images. Where the velodrome is, there were factories in the Seurat painting,” he says. “That’s quite interesting, how sport’s become this kind of driver of ­economic regeneration.

A new revolution
“But actually what really interested me was the fact that Seurat painted in the 1880s. He was a very radical painter in his day — it doesn’t look like that now, but he was one of the first artists to really embrace ­republican France.

“So the painting was essentially [about] a new urban working-class community in a park setting.” The Olympic development is even presented as “a new park for the ­people” in the east end of London.

“I really want to know if it will ever be that.

“And I was really interested who those people were,” particularly as locals have been largely excluded from the site, which can be seen only from a raised viewing platform in the distance. Access to the park is strictly controlled, security a major concern.

Gabie’s previous locations have included landscapes as diverse as the Antarctic, Liverpool and KwaZulu-Natal. “I’m really interested in ­environments that are in a state of flux or change,” he says. “All my work in the past 15 years has been in response to very specific locations or place,” says the artist, who left South Africa in 1980.

In it together
Gabie sees “a really big gap between the rhetoric and the reality” in the Olympic development, which he finds “rather disappointing. The Olympics in the UK has been built and marketed [as being] for ­everybody.”

But although it’s ostensibly “all-inclusive” — and Gabie mentions that the buses driving around east London carry the slogan “you’re part of it” — in reality “the real drivers of the Olympics are big business [and] corporate sponsorship”.

Gabie says he spent a lot of time getting to know the people on the site and that most he encountered were enthusiastic. In the Olympic Park he found that “there is a completely hidden workforce of bus drivers around which everything depends”. The drivers do 14-hour shifts, the longest on the site. They ferry all the workers between the different venues because nobody is allowed to walk around the site.

One of those drivers, Semra “Sam” Yusuf, swims the length of her bus route in the Olympic pool in 1270, a film produced by Gabie. This is also the length in metres of her route. The film, which took months of ­negotiation, “unpacks her story”, how she came as a teenager to ­London from Cyprus.

At one point in the 1270 film, the action cuts to the shiny Olympic offices. Rolling television news in the background carries the headline “London Riots” and beams live scenes of mayhem from the streets of Hackney — just down the road.

Sitting on every seat is a film that tracks Gabie’s attempt to sit in all of the Olympic stadium’s 69?000 seats. In 69 hours, spread over three weeks, he managed to sit in about 40?000 seats, taking in the different vantage points.

Sense of space
This was a way “of ­measuring the enormity of the place,” says Gabie. “There’s something quite eerie about being in a vast arena like that when you’re on your own. It’s absolutely silent.”

A short film, titled 9.58 seconds, refers to the time it takes Usain Bolt to run 100m. This is an animated series of photographic portraits of construction workers on the site. Shot at 25 frames a second he manages to fit in 239 portraits in the 9.58 seconds the film lasts.

Part of the myth about the Olympic Park in London is that it was a derelict wasteland. But “in fact there was a whole cultural life and history in this area, until the Olympics came to town and demolished everything”, says Gabie.

On the site of the aquatics centre stood a perfume factory, which once housed the largest ­artists’ ­studios in Europe. Artists such as Grayson Perry and Rachel Whiteread worked there.

Gabie feels it is important to acknowledge this part of the history and his residency began with an exhibition made up of work created by some of those artists when they were in east London.

Having erased this recent past, the legacy of London 2012 has “yet to be seen”, cautions Gabie. “Past history of the Olympic games suggests there hasn’t been a good legacy, perhaps with the exception of Barcelona.”

“It’s a concern for me what will happen when it’s all over,” says Semra, the driver, at the end of her film. “I’m not very optimistic, ­personally, in that sense.”

Dark forces at work in Amsterdam