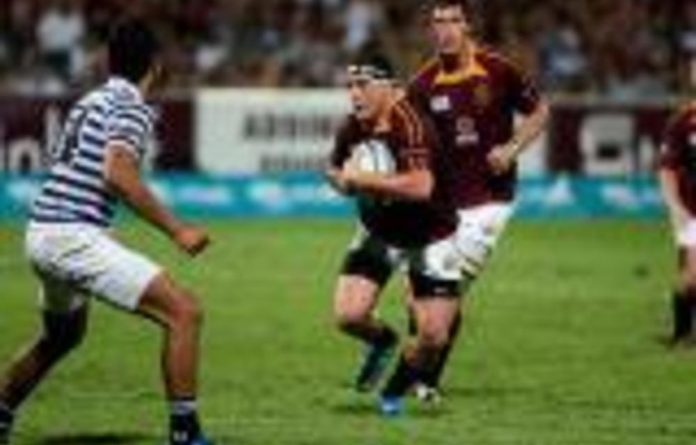 The Maties (Stellenbosch University) officially ended the University of Cape Town’s (UCT) reign as champions in Stellenbosch on Monday, but Potchefstroom was the scene of the major drama in round six of the 2012 Varsity Cup.

While the Maties, the only unbeaten side in the tournament, ended any slim hopes of an unlikely Ikey Tigers semifinal place with a 45-5 victory over UCT, the North West University (NWU-Pukke), in turn, booked themselves a place in the semifinals with a dramatic 34-32 win over the University of Johannesburg (UJ).

UJ, hoping for a second successive Varsity Cup home semi-final, saw their chances all but dashed as they suffered a second away loss this season — that just a week before entertaining the Maties on their own turf in the final round of league action.

The men from Johannesburg trailed the Pukke by 8-24 at half-time, before launching a stunning second-half comeback at the Fanie du Toit Sports Grounds.

UJ managed to draw level at 32-32, but could only watch as NWU-Pukke number 10 Gerhard Nortier — his team’s hero in Cape Town last Monday — landed a penalty on the stroke of full-time to seal a valuable victory.

It means that Pukke cannot be caught in fourth place, but next week’s final round of league action — UCT vs UP-Tuks; UJ vs Maties; NWU-Pukke vs Shimlas; TUT vs NMMU — will simply serve to confirm the four semi-final fixtures and which team will finish seventh and, thereby, play a promotion/relegation match against the second-placed Varsity Shield side.

The TUT Vikings, despite their brave effort in going down 36-56 to the Shimlas, will be relegated from the Varsity Cup — in favour of the winning Varsity Shield team — but any one of UCT, NMMU or the Shimlas can still play in the promotion/relegation fixture; all depending on what happens next week.

UCT’s reign as Varsity Cup champions was ended in crushing fashion at the Danie Craven Stadium, the Men in Maroon running into a 29-5 half-time lead — including claiming the four-try bonus point inside the first 40 minutes.

The defending champions had no answer to Stellenbosch’s powerful and faultless play, making them the team to beat as they go in search of a fourth Varsity Cup title in five years.

The teams standing in their way are UP-Tuks, who survived a brief scare against NMMU before running out 42-31 winners in Pretoria, and UJ, despite their loss on the road.

As things stand now, the Maties top the Varsity Cup log on 27 points, followed by UP-Tuks (25), UJ (22), NWU-Pukke (19), Shimlas and NMMU (both on 11 points), UCT (nine points) and TUT who collected their first log point of the season by scoring four tries against the Shimlas.

Meanwhile, defending champions CUT bounced back from a run of poor form to rack up a massive 73-8 win over UWC in Varsity Shield action, whilst Wits were pushed all the way in their 21-12 win over the winless UKZN. As things stand now, CUT top the log ahead of Wits — on points’ difference only — with these two teams likely to contest the final for the second year running.

Finally, there was a huge win in the Koshuisrugby Championships for Vishuis (from Shimlas), who smashed their TUT opponents, Monitor, by 133-13. Defending Koshuisrugby champions, Patria, got their season back on course with an impressive 44-21 victory over Bastion (UJ). — Sapa