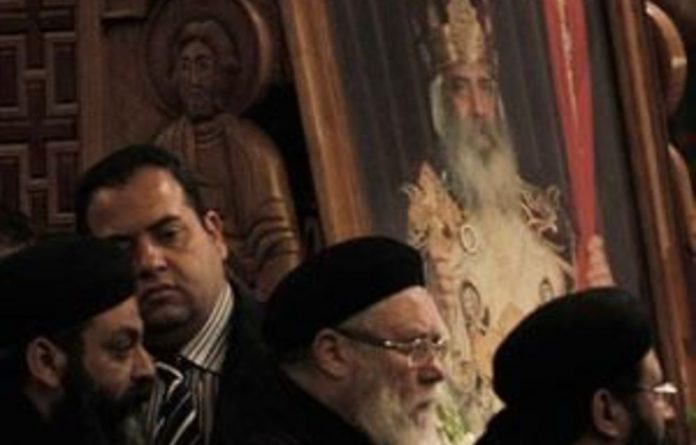 Thousands of mourners dressed in black gathered in Cairo on Tuesday for the funeral of Egypt’s Orthodox Christian Pope Shenouda, who spent his final years trying to comfort a community disturbed by the rise of political Islam.

Shenouda, who died on Saturday aged 88, promoted religious harmony, winning respect among the Muslim majority, but his last years witnessed a growth in sectarian tension that worsened with the overthrow of President Hosni Mubarak last year.

“I can’t tell you how much sorrow I have inside me. This was a great, great man and it will be hard to find anyone like him again,” said Ivon Mosaed, a 52-year-old Christian Copt who heads an educational institute offering foreign languages courses.

Religious figures from several countries including a Catholic delegation from the Vatican and foreign ambassadors massed in the Orthodox Cathedral as long-bearded Coptic priests wearing bulbous black mitres prayed over Shenouda’s body lying in an open coffin, a golden mitre upon his head and a gold-tipped staff in his hand.

A delegation from the ruling military council and several candidates for Egypt’s upcoming presidential elections attended the funeral. Security was tight, with dozens of police and army trucks scattered around the cathedral and plainclothes police posted on bridges and in streets nearby.

The prayers were led by Bishop Bakhomious, head of the church of Bahaira, a district in the Nile Delta north of Cairo, who will temporarily hold the post of pope for two months until a new leader is elected.

“I am so sad of course and many of my Muslim relatives are sad as well,” said Muslim university student Iman, who was dressed in black and wearing a black veil. “He was a decent Egyptian man who was also known for being very wise.”

Complaints of discrimination
Egypt has seen less of the religious violence and discrimination that prompted members of ancient Christian communities to migrate from Iraq and other Arab countries.

But Coptic Christians, who comprise about a 10th of Egypt’s 80-million people, have long complained of discrimination and in the past year stepped up protests, which included calls for new rules that would make it as easy to build a church as a mosque.

Thousands have paid their respects at the cathedral since he died. For much of the time, Shenouda’s body was put in a seated position on a ceremonial throne dressed in gold and red embroidered vestments.

On Sunday, the cathedral had to close its doors several times in an attempt to contain the crowds. Two mourners were killed in the crush, medical sources said.

The burial is expected to take place at the Wadi el Natrun monastery in the desert northwest of Cairo, where the late pope had requested he be interred.

Shenouda was banished to Wadi el Natrun monastery in 1981 by then-President Anwar Sadat after he criticised the government’s handling of an Islamic insurgency in the 1970s and Egypt’s 1979 peace treaty with Israel.

The more consensual approach he took in later years has left some Egyptians wondering whether his successor will build on that legacy or seek to counter the new political dominance of Islamists long suppressed by Mubarak, or seek more confrontation in his defence of Copts.

“We need someone who would defend the rights of Christians but through calm diplomatic means that would not create grudges with Muslims or the state,” said Mustapha al-Sayyid, a politics professor at Cairo University.

One of Shenouda’s oft-repeated sayings, also cited in newspapers, was: “Egypt is not a nation we live in, rather it is a nation that lives in us.” — Reuters

Tom Pfeiffer
Tom Pfeiffer works from London, England. A Bloomberg editor. Views expressed are mine, not those of my employer. Retweets are not necessarily an endorsement Tom Pfeiffer has over 122 followers on Twitter.