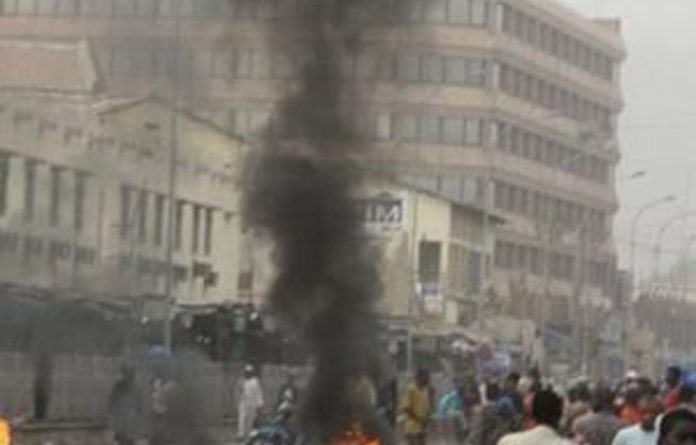 Renegade Malian soldiers went on state television on Thursday to declare they had seized power in protest to the government’s failure to quell a nomad-led rebellion in the north.

The coup has been fronted by soldiers of the rank of captain or lower and, if successful, will add a new layer of insecurity to a Saharan region battling local al-Qaeda agents and a flood of weapons trafficked from Libya since the fall of Muammar Gaddafi.

The army has for weeks appealed to the government for better weapons to fight the northern Tuareg rebels, now bolstered by heavily-armed ethnic allies who fought on Gaddafi’s side last year but have returned to Mali.

Members of the newly-formed National Committee for the Return of Democracy and the Restoration of the State (CNRDR) read a statement after heavy weapons fire rang out around the presidential palace in the capital Bamako throughout the night.

“The CNRDR … has decided to assume its responsibilities by putting an end to the incompetent regime of Amadou Toumani Toure,” said Lieutenant Amadou Konare, spokesperson for the CNRDR.

“We promise to hand power back to a democratically elected president as soon as the country is reunified and its integrity is no longer threatened,” Konare, flanked by about two dozen soldiers, said in a statement marred by sound problems.

Immediate curfew
A subsequent statement by Captain Amadou Sanogo, described as president of the CNRDR, declared an immediate curfew “until further notice”.

Government and military sources said the mutineers entered the presidential palace overnight after it was vacated by Toure and his entourage. The current whereabouts of Toure — a 63-year-old former coup leader who was due to step down after April polls — were unknown.

His decade-long rule has been among the most stable in the region. But the gold and cotton-producer has struggled to contain a northern rebellion in which dozens have been killed and nearly 200 000 civilians have fled their homes.

The Tuareg uprising came on top of a spate of kidnappings of Westerners carried out by al-Qaeda allies that have set up bases in Mali’s remote north.

UN secretary general Ban Ki-moon called for calm and for grievances to be settled democratically in a statement hours before the soldiers said they had seized power.

The commission of the AU said it was “deeply concerned by the reprehensible acts currently being perpetrated by some elements of the Malian army”.

Denials
Sporadic heavy weapons and tracer fire rang out in Bamako through the night and the mutineers, who say they lack the arms and resources to face the separatist insurgency in the Sahara, temporarily forced the state broadcaster off air.

“We now know it is a coups d’état that they are attempting,” one defence ministry official said, asking not to be named.

The official said Toure was in a secure location but gave no more details and there was no word from Mali’s presidency. Statements posted by its official Twitter handle on Wednesday had denied there was a coup attempt.

A Reuters correspondent saw soldiers shooting in the air on the streets of Bamako where, despite the curfew, there were a number of motorists and motorcyclists.

Anger has grown in the army at the handling of the rebellion that has exposed Bamako’s lack of control over the northern half of a country twice the size of France.

In a sign of the breadth of the army mutiny, two military sources in the northern town of Gao confirmed the arrests of several senior officers in the town, a regional operations centre for the military.

Trigger
Bamako was briefly paralysed last month as hundreds of Malians put up street barricades and burned tyres in the streets to protest at the government’s handling of the rebellion.

A military source said a trigger for the mutiny was a visit on Wednesday by the defence minister to a barracks in the town of Kati about 20km north of Bamako.

“The minister went to speak to troops but the talks went badly and people were complaining about the handling of the crisis in the north,” the source said.

A defence ministry official who was at the meeting said a soldier accused the defence minister of betraying them by not giving them means to fight the rebels. Soldiers then began throwing rocks at the minister before taking weapons from the armoury and shooting in the air.

Tuareg fighters seeking to carve out a desert homeland in Mali’s north have made advances in recent weeks, including the seizure this month of the key garrison town of Tessalit by the Algerian border. — Reuters

Congo coup – or con? The web of deceit