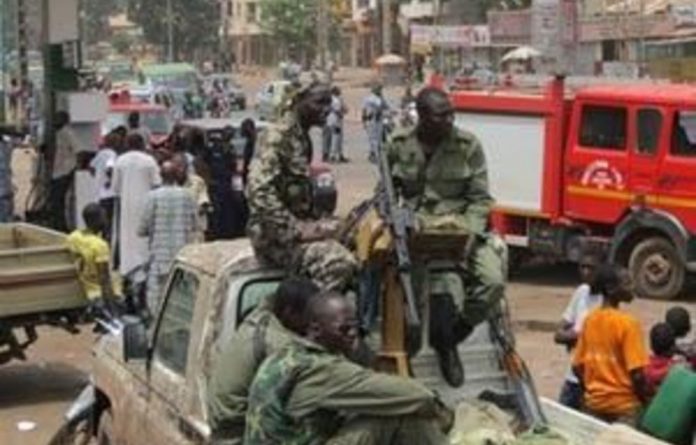 Leaders of the coup in Mali faced increasing pressure on Monday as Malian lawmakers and opposition figures joined forces to call for them to go and Tuareg rebels closed in on a key northern town.

In Bamako, still tense four days after the coup, several hundred people gathered at a meeting of 38 political parties who announced the formation of a united front against the junta.

“Our aim is clear, to get the junta to leave,” said Soumaila Cisse, who would have been one of the main presidential candidates in polls that had been planned for April 29 but were cancelled by the military rulers.

“This coup d’état is unconstitutional and we will not accept it,” he said.

“Get out Captain [Amadou] Sanogo,” opposition supporters shouted, referring to the coup’s leader.

The National Assembly issued a statement demanding an immediate return to constitutional order, the opening of all borders, the release of all arrested government officials and for elections to go ahead as planned.

Only one small opposition party has come out in support of the coup.

Hunger strike
Fourteen government figures, including the prime minister and foreign minister, began a hunger strike over their detention at a military barracks outside the capital, which serves as the junta headquarters.

“There are 14 of us in a room of 12 square metres, sleeping three to a mattress,” said a message from one of the officials.

“Our basic rights are being violated.”

President Amadou Toumani Toure’s whereabouts are still unknown but he is believed to be safe under the protection of his loyalist paratrooper guard.

Some 1 000km to the north, military officials said on Sunday that they had fought off a Tuareg rebel attack on Kidal, one of the region’s key cities.

The Islamist rebel group Ansar Dine said in a statement on Saturday its fighters were on the verge of taking the city.

Ansar Dine, which means Defenders of Faith in Arabic, is one of two rebel movements involved in the separatist battle.

Killed and captured
In the eastern Gao region south of Kidal, Tuareg fighters killed Amadou Diallo, the head of a militia fighting beside the army, along with eight of his fellow fighters Sunday, several sources reported.

A Malian army source said he had died in an ambush.

The Tuareg desert tribes in January launched their first rebellion since 2009 in a decades-old campaign for independence.

Their forces were boosted by the return of heavily armed battle-hardened fighters from Libya who served late dictator Muammar Gaddafi.

In early fighting they have overwhelmed the weak Malian army and scores of soldiers are said to have been killed and captured.

It was anger among rank-and-file troops at the government’s handling of the conflict that led to the coup.

Soldiers revolted in Bamako on Wednesday, leading to a full-blown coup on Thursday as they seized government buildings and forced the president to flee.

In a meeting with French ambassador Christian Rouyer on Saturday, Paris urged Sanogo to give up the putsch and hold April elections as scheduled, Cooperation Minister Henri de Raincourt told French television on Sunday.

Sanogo had not yet responded to the demands, the minister said.

The junta has been largely frozen out by the international community in a chorus of rebukes and suspension of aid.

The African Union suspended Mali, while Europe and Canada froze aid and the US threatened to follow suit.

Leaders from the regional Economic Community of West African States (Ecowas) will hold an emergency meeting in Abidjan on Tuesday, the day the junta has called for civil servants to return to work.

Monday marks the 21st anniversary of the last coup, when Toure led the overthrow of dictator Moussa Traore.

He steered the country to its first democratic election a year later, for which many consider him a hero. — Sapa-AFP