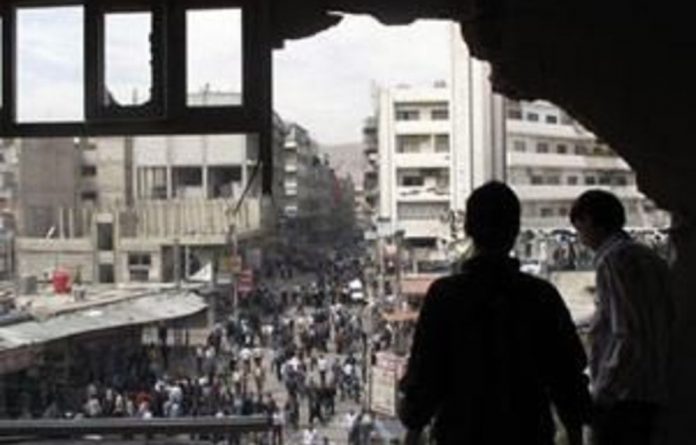 Syria told UN-Arab League envoy Kofi Annan it had begun pulling troops out of several cities on Thursday in line with a peace plan accepted by President Bashar al-Assad but his foes said the army was still firing in those towns and elsewhere.

Annan’s spokesperson Ahmad Fawzi said Syrian authorities “told us that they have begun withdrawing troops from certain areas”, namely the cities of Deraa, Idlib and Zabadani. Speaking in Geneva, he said this was being verified but did not say how.

“They are complete liars, there is no army withdrawal, they are still in the middle of the city. They fired on the city this morning, like they do every day,” a man calling himself Abu Mustafa said by telephone from Zabadani near the Lebanon border.

However, he did acknowledge a modest pullback. “The army withdrew 15 tanks yesterday but the rest are all around the checkpoints as usual,” Abu Mustafa said.

Video filmed by activists in the Hraytan district just outside the city of Aleppo showed a column of five tanks and armoured personnel carriers firing heavy machineguns as they advanced through a village.

A diplomatic face-off intensified between Syria’s ally Russia and Western powers who want Assad to go, with France accusing the 46-year-old Syrian leader of cheating on his promises, while Moscow told opposition supporters abroad not to set ultimatums.

But at the UN Security Council, both sides agreed to a statement calling upon Syria to comply with Annan’s April 10 deadline to halt fighting and withdraw.

There has been no let-up in the violence since Assad accepted Annan’s six-point peace plan more than a week ago.

Advance planning team
In the flashpoint city of Homs, activists filmed explosions in a street littered with debris. Blasts and gunfire rocked Douma, a town near Damascus, shortly before a senior UN peacekeeping official arrived in the Syrian capital.

Norwegian Army former Chief of Staff Major-General Robert Mood (54) brought an advance planning team of 10 to decide how around 250 UN monitors might oversee the truce between army and insurgents due to take effect by next Thursday.

In Damascus, thousands of mourners turned out in the Kafr Souseh district for the funeral of two activists shot dead in their car overnight. “We are not afraid. God is with us,” they chanted. There was no sign of troops in the streets.

Some analysts say any arrival of men in UN blue helmets will embolden a return to mass protests, as happened when an Arab League monitoring mission began operating in Syria in December. It was later withdrawn as violence increased.

More than 42 000 Syrians have fled the country since the uprising began a year ago and quickly descended into violence.

Turkey said over 1 600 had crossed the border in the last two days, twice the recent average rate.

The UN says Assad’s forces have killed more than 9 000 people in the past year. Syria told the world body this week that 6 044 had died, including 2 566 soldiers and police.

Assad has promised to withdraw his army from population centres by April 10, and Annan’s plan calls for rebel forces to cease fire within 48 hours after that.

Mood has experience of armed UN peacekeeping operations in Kosovo, where around 60 000 troops were deployed in 1999 after a ceasefire and army withdrawal agreement were already in place.

In Syria, where Western powers have ruled out military intervention, Annan envisages only unarmed UN monitors.

UN member states were already being asked to provide troops for the mission, to be deployed after April 10, Annan’s spokesperson said. The former UN chief will hold talks on Syria in Iran, Assad’s main regional ally, on April 11, Fawzi added.

Annan has assiduously sought backing from Assad’s friends as well as his foes for his difficult peace mission.

Russia said it could support a new UN Security Council statement backing Annan’s timeline for a Syria ceasefire if it does not level “threats and ultimatums” against Assad.

“The Syrian government has accepted [Annan’s] proposals and has begun implementing them and it is very important not to undermine this process with ultimatums and threats,” Russian Foreign Minister Sergei Lavrov said on Thursday.

Russia has taken a pro-Assad tone but some diplomats say Moscow has grown increasingly frustrated with Damascus and its failure to end the uprising, even as it denounces Western, Arab and Turkish calls for the Syrian leader to quit. — Reuters