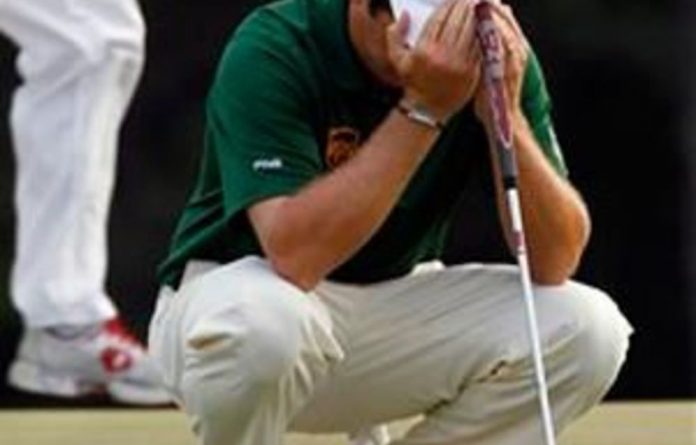 The wonder shot played by Louis Oosthuizen for a rare albatross on the second hole of Sunday’s final round in the Masters ironically may have held him back, the South African said.

It was only the fourth double eagle — a two on a par-five — in Masters history and at that stage propelled the stocky South African into a two-shot lead, having started the day three shots behind leader Peter Hanson of Sweden.

But he promptly dropped a shot on the next hole and did not make another birdie until the 13th before going on to lose a heartbreaker to Bubba Watson on the second hole of a sudden-death playoff.

“You know, it was tough after that double eagle,” he said, referring to his tremendous four-iron from 253 yards effort at the 575-yard hole.

“I mean, you know, when something like that happens early in your round, you think that this is it. That was my first double eagle ever … So it was tough. It was tough the next five holes to just get my head around it and just play the course … But I felt like I found my rhythm going down 11, and you know, played well in from there.”

The 29-year-old from Mossel Bay was a runaway winner of the British Open at St Andrews in 2010 and great things were predicted for a player who has one of the purest swings in golf.

But injuries held him back after that and it was only in the last few weeks that he has been back to playing at his best.

Threats
A third-place finish at last week’s Houston Open signalled Oosthuizen’s threat and an opening 68 at Augusta National on Thursday was impressive.

A big incentive here was the fact that close friend and fellow South African Charl Schwartzel won here last year to follow in the footsteps of Trevor Immelman and Gary Player who became the first international winner of the tournament in 1961.

And when Watson clattered his drive deep into trees down the right-hand side of the 10th fairway on the second hole of the playoff, it looked like he was about to join that select group.

But, on a hole he likes the shape of, Oosthuizen did much the same, although his ball rebounded back out into light rough.

The South African was short with his approach and then watched as the inventive Watson hit an amazing pitch shot from out of the trees to about 10 feet from where he eventually two-putted to win his first Major.

“I have no idea where he was,” said Oosthuizen.

“From where I stood when the ball came out, it looked like a curveball going to the right. So I knew he had to hit a big hook. But an unbelievable shot … I left myself in a really awkward spot with that chip and just didn’t get the check on it that I thought it would … But that shot he hit definitely won him the tournament.”

Still, second place represented a massive improvement for Oosthuizen at Augusta National. He missed the cut in his three previous Masters campaigns. — AFP

French Open final: No looking back for Sharapova

Miracle in Medinah as Europe triumphs in Ryder Cup