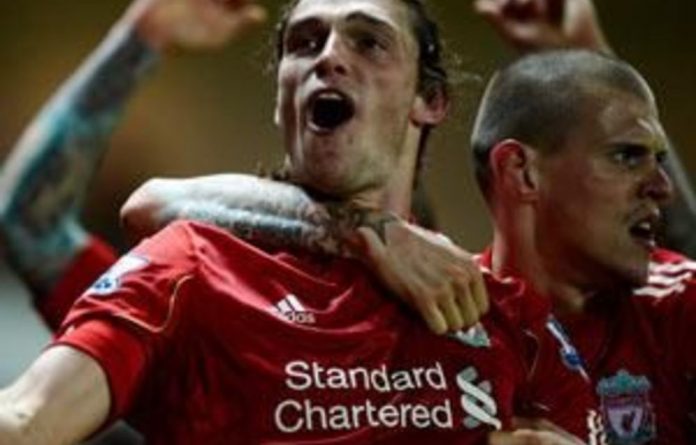 Liverpool looked to be cruising to victory after goals from Maxi Rodriguez fired them into a 2-0 lead early on.

But a red card for goalkeeper Alexander Doni — himself filling in for the suspended Pepe Reina — changed the complexion of the game and thrust third-choice goalkeeper Brad Jones into the limelight.

Jones promptly announced his entrance by saving Ayegbeni Yakubu’s spot-kick but Rovers hauled themselves back into the contest and eventually drew level.

Yakubu made amends for his penalty miss to head home for 2-1 and then levelled from the penalty spot in the second half to make it 2-2 and give Rovers hope of pulling clear of the relegation zone.

However Carroll had the final word with his header a minute into stoppage time to give Kenny Dalglish, the Liverpool manager, another Ewood Park occasion to put in his memory bank.

It will always be a special ground for Dalglish after winning the Championship while in charge of Blackburn in 1995.

And it became extra-special within 16 minutes as Liverpool’s lightning start eased the pressure on Dalglish.

Perfectly-judged cross
Only 13 minutes had gone when Blackburn went behind, with much of the credit going to Liverpool defender Martin Skrtel who speared a splendid 80-yard pass into the feet of Craig Bellamy.

The winger charged forward before delivering a perfectly-judged cross that Rodriguez turned in from close-range.

Three minutes later, Liverpool stretched their lead — and Rodriguez was again the scorer after impressive work from Jonjo Shelvey.

The midfielder won the ball in midfield and surged forward to force a save from Rovers’ keeper Paul Robinson.

Carroll’s shot from the rebound was blocked but Rodriguez was more clinical when the ball dropped to his feet and he swept it in.

Liverpool’s stunning start came despite a much-changed side with Dalglish clearly eyeing this weekend’s FA Cup semifinal against Everton.

Another regular missing was Pepe Reina, serving the second game of his three match suspension to give a rare opportunity to Brazilian Doni.

Reina’s red card at Newcastle had presented Doni with the chance to play in Saturday’s semifinal — but his Wembley dream was shattered after just 25 minutes after he brought down Junior Hoilett.

And Jones, now heading to the Wembley showpiece tie, made an instant impact when he saved the unconvincing penalty from Yakubu.

Jones was beaten, though, in the 36th minute when a fine free-kick from David Dunn gave Yakubu the chance to head inside the post rom eight yards.

Dalglish’s outnumbered team were pinned back for long periods during the rest of the match.

Jones dealt with a 55th minute shot from Dunn and also went down quickly to clutch a 58th-minute header from Grant Hanley, but Blackburn did draw level three minutes later.

But Jones was at fault when he allowed Yakubu to charge down a clearance and responded by pushing the striker.

The penalty award was followed by a yellow card for the keeper and, this time, a decisive finish from the spot by Yakubu.

It looked certain to earn Blackburn a valuable point and they were the more inventive team in the closing stages but their hopes of moving out of the bottom three were destroyed by Carroll’s dramatic late winner. — Sapa-AFP