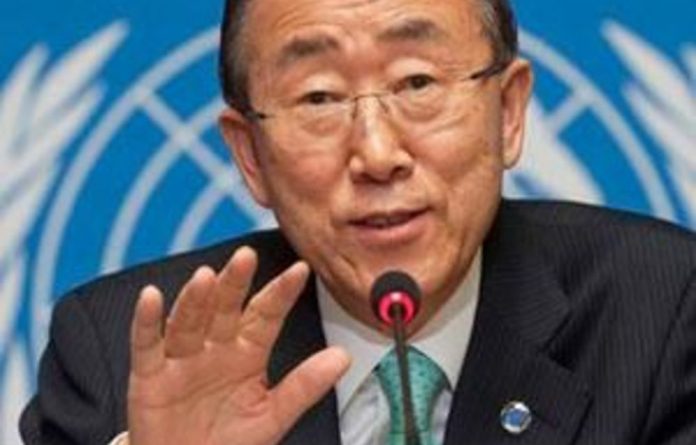 Efforts to build on a “very fragile” Syrian ceasefire are accelerating with detailed plans to deploy UN observers within days being drawn up to keep up pressure on Bashar al-Assad for a peaceful outcome to the bloodiest chapter of the Arab Spring.

Kofi Annan, the international envoy, has told the UN Security Council that a 6am truce was being partially observed, though the regime and the opposition accused each other of breaching it in the first hours after it began.

Annan, representing the UN and the Arab League, said the Syrian government had not withdrawn its troops, tanks and heavy weapons from cities as it was supposed to do 48 hours before Thursday’s truce came into effect.

“Syria is experiencing a rare moment of calm on the ground,” he said in a statement.

“The cessation of hostilities appears to be holding … This is bringing much-needed relief and hope to the Syrian people who have suffered so much for so long in this brutal conflict.”

‘Terrorists’ blamed
Syrian state TV blamed “terrorists” for a bomb attack in Aleppo, while diplomats and opposition sources reported incidents of soldiers swapping their uniforms for civilian clothes to mislead any outside observers. Expectations are high, based on previous experience that the government will try to manipulate the situation.

“It’s clear that the regime hasn’t implemented what it promised but there are straws we can clutch at,” said one senior western diplomat. Scepticism about the prospects for success is rife but no one has an alternative if the Annan plan fails. If it does, there is likely to be increased pressure to arm the rebels of the Free Syrian Army or for foreign intervention.

France’s President Nicolas Sarkozy joined Barack Obama in calling on Syria to abide fully by the plan and end its “brutal crackdown”. David Cameron said that Syria needed a fast “transition at the top” to avoid outright civil war.

Anti-Assad forces could face a significant test on Friday if plans for mass protests go ahead. Burhan Ghalioun, head of the opposition Syrian National Council (SNC), said: “It will be the biggest possible [demonstration] so that the Syrian people can express their will.”

The right to peaceful assembly is one plank of Annan’s six-point plan. It also calls for humanitarian and Arab and foreign media access.

Ready for a ceasefire
Ricken Patel of the campaigning group Avaaz said: “Having used the Annan plan as cover, killed 1 000 people and crushed the remaining pockets of the FSA, of course Assad is happy to now observe a ceasefire. The question is, will he keep it when the people of Syria flood into the streets on Friday?”

Worryingly, the Syrian interior ministry said in a statement that only pre-authorised demonstrations would be permitted by police. It also called on opposition fighters “whose hands have not been stained with Syrian blood” to hand themselves in with their weapons with a promise they would be freed without charge.

Annan’s private briefing to the Security Council — by video link from Geneva — was accompanied by intense activity to put together a UN observer mission anchored in a new Security Council resolution.

Initially there are likely to be 50-80 unarmed monitors but that could rapidly become a 500-strong mission, diplomatic sources said. Unimpeded access, independent communications and security guarantees were all issues that would need to be quickly agreed with the Syrian authorities — who were accused of misleading the ill-fated Arab League monitoring mission that was deployed last December.

“It will be no good if they are able to deploy in Homs and Hama if the regime can do what it wants unobserved in Idlib and Deraa,” one official said. Annan would also have to make clear what would constitute a sufficiently serious breach of the ceasefire to render it void.

The UN official looking at the arrangements, Major General Robert Mood of Norway, underlined the difficulties. “Both sides are plagued by a very high degree of mutual suspicion,” he said. “It’s terribly difficult for them to cross that abyss.”

Syria’s ambassador to the UN, Bashar Ja’afari, said his government was “on board” with the peace plan. But he said that government forces would remain on alert to “counter attacks” and that “legally speaking, there is a big difference between declaring a ceasefire and putting an end to the violence”. —