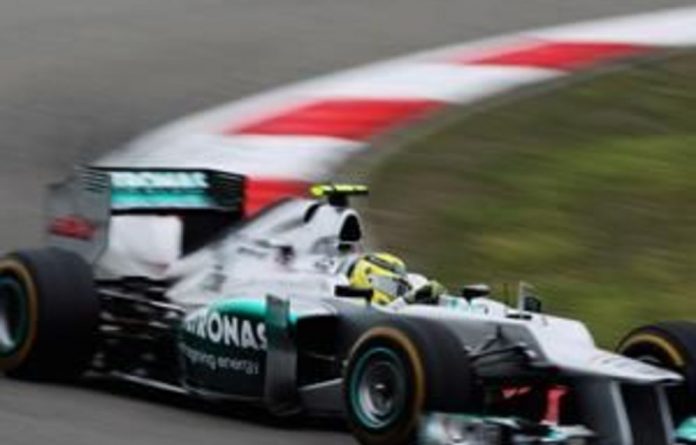 Mercedes’s Nico Rosberg claimed his first Formula One race victory in 111 attempts as he led from pole position to take the Chinese Grand Prix in style on Sunday.

Rosberg showed no early nerves from pole position and made the perfect start to stay ahead of team-mate Michael Schumacher going into the crucial first corner at an overcast but dry Shanghai International Circuit.

The big loser at the start was Vettel, whose nightmare weekend got slightly worse when he slipped from 11th on the grid to 15th.

With the seven-time champion Schumacher using all his experience to act as a buffer from the chasing pack, Rosberg was able to stretch his lead with 10 of the 56 laps under his belt in relative comfort.

But in lap 14 that strategy — intentional or not — came undone in amateurish fashion when Schumacher appeared to have been given the all-clear from a pit stop before one of the wheels was properly fastened.

A Mercedes mechanic frantically waved his arms but the 43-year-old was gone, only to slow up and stop shortly afterwards as he was forced to meekly bow out, his chance of a first race win since coming out of retirement over.

Minutes later Mercedes confirmed on Twitter: “Michael’s right front wheel was not fitted properly at the stop leading to his retirement.”

Hairy moments
At about the same time, Rosberg was in the pit lane so he could switch to intermediate tyres, allowing Sergio Perez to briefly head the field, before he too pitted, allowing Ferrari’s Felipe Massa to briefly take the lead.

But the flying Rosberg was back in front once more when he easily passed Massa’s cumbersome Ferrari, with Button and Hamilton now hot on Rosberg’s heels. They were soon joined by Romain Grosjean, who was to finish sixth.

Rosberg surrendered his lead to Button when he pitted on lap 35, then Webber had a hairy moment when he ran wide on the kerb, launching the front of his Red Bull into the air, drawing gasps from a packed crowd.

Rosberg was out in front again when Button stopped for a final time and appeared to linger, allowing the Lotus of Kimi Raikkonen to jump into second, with Vettel’s assault taking him up to third with 42 of the 56 laps gone.

Button’s challenge appeared over, with Rosberg enjoying a more than 22-second lead over second-place Raikkonen with 10 laps to go and on a fresh set of tyres. Vettel meanwhile used all his ability to pass Button and move into third.

With eight laps to go, a mistake by Raikkonen saw him plummet down to midfield, while Vettel, Button and Hamilton duelled over second and third. — AFP

In the most frenzied eSports games, players can be finished by 23 because reactions supposedly slow after that
Read more
Motoring