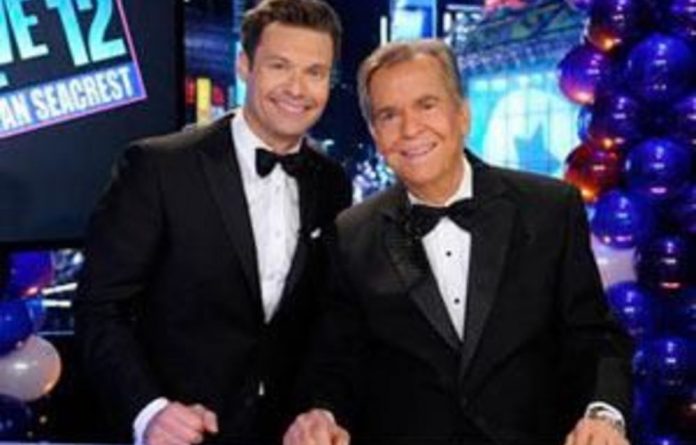 Clark had entered the hospital on Tuesday night for what was supposed to have been an outpatient procedure, Shefrin said in a statement. He did not elaborate, except to say that attempts to resuscitate Clark after the heart attack were unsuccessful.

Starting out as a TV announcer in Utica, New York, Clark parlayed his Bandstand fame into a career as a host and producer of dozens of other shows, including the American Music Awards and Golden Globes broadcast.

His youthful good looks — which he maintained into his 70s — won him the nickname of “America’s oldest teenager.”

Clark’s career slowed down after he suffered a stroke in December 2004 that sidelined him from the New Year’s Eve show for the first time since he launched the annual broadcast in 1972.

But Clark gamely returned to the programme the following year, and had continued since then to announce the annual countdown to midnight, despite his considerably slurred speech, in a somewhat revised format co-hosted with the much younger Ryan Seacrest of American Idol fame.

“I am deeply saddened by the loss of my dear friend, Dick Clark,” Seacrest said in a Twitter post. “He has truly been one of the greatest influences in my life.”

In a lengthier statement, Seacrest saluted Clark as “smart, charming, funny and always a true gentleman. … He was a remarkable host and businessman and left a rich legacy to television audiences around the world.”

Tributes to Clark poured in from the entertainment industry, reflecting the wide range of talent he helped showcase, from soul diva Aretha Franklin, who called him “an American institution”, to Connie Francis, who credited Clark with rescuing her career as a teenager by helping turn her single Who’s Sorry Now into a hit.

Clark’s most enduring legacy was his role in introducing rock ‘n roll to a wide US audience while presiding over more than three decades of pop music and dance fads as host of American Bandstand.

Hosted landmark show
As the first network TV show to feature rock ‘n roll, Bandstand, which began airing nationally in 1957, won over the US audience with its non-threatening image — girls were not allowed to wear slacks or tight sweaters, and boys dressed in jackets and ties.

Smoking and chewing gum were banned, and the show featured a group of Philadelphia high school students who developed their own national following. Clark himself embodied that clean-cut image. He also was an astute businessman with a keen eye for cultural trends who targeted the mainstream audience and was careful not to offend his viewers.

Lacking a personal passion for rock, he favoured dance-friendly teen pop, and rock ‘n roll purists accused Clark of helping to usher in an era of blandness, contributing to what some critics saw as a neutering of the earthy rock ‘n’ roll genre that grew out of rhythm and blues during the 1950s.

But Bandstand became an institution and, by the time it left the air in the late 1980s had become the longest-running music show in US TV history. Along the way it gave rock legends such as Chuck Berry, Jerry Lee Lewis and Buddy Holly their first national exposure.

Initially running five days a week in the afternoon, each broadcast typically showcased one or two guest artists who would lip-sync their current hits, chat with Clark about their careers and sign autographs. Clark kept tapes of their appearances and retained full permission to use them in the future, building a valuable archive of early pop history.

The show was hugely influential with US teens, and songs featured by Clark typically shot up the charts, so much so that it once drew the attention of legislators scrutinising corrupt business practices in the music business.

In 1959 a US Senate subcommittee investigating payola took an interest in Clark after they found that he had partial copyrights to 150 songs, including many played on his show, and that he also had ties to music-related businesses.

At the end of the investigation the Senate found nothing illegal by Clark, but ABC ordered the host to give up the outside businesses or the show. He chose to keep the show.

Born Richard Wagstaff Clark in 1929 in New York, the entertainer got an early job in the mail room of a radio station partly run by his father and uncle before attending Syracuse University and landing a job as a TV announcer in Utica.

He was hired at Philadelphia’s WFIL, filling in for regular host Bob Horn on Bandstand, then a local Philadelphia programme. He took over the show full time in 1959 after Horn was arrested for drunken driving.

Originating on the local air waves in 1952, the show was picked up nationwide by ABC in 1957, becoming a hit and making Clark a household name. It aired weekday afternoons until August 1963, then became a weekly Saturday network show until 1987, when it was cancelled. It aired in syndication for another year with Clark as host, then resurfaced on the US cable network for less than a year with a younger host, David Hirsch.

In 2002, NBC introduced the prime-time drama American Dreams, which recreated American Bandstand as the backdrop for a series revolving around a teenage girl who dances on the show. Clark was one of the producers of the show.

In May 2004, Clark announced that he was shopping an updated version of American Bandstand to a number of networks for a debut in summer 2005. That project evolved into the Fox contest show So You Think You Can Dance. — Reuters