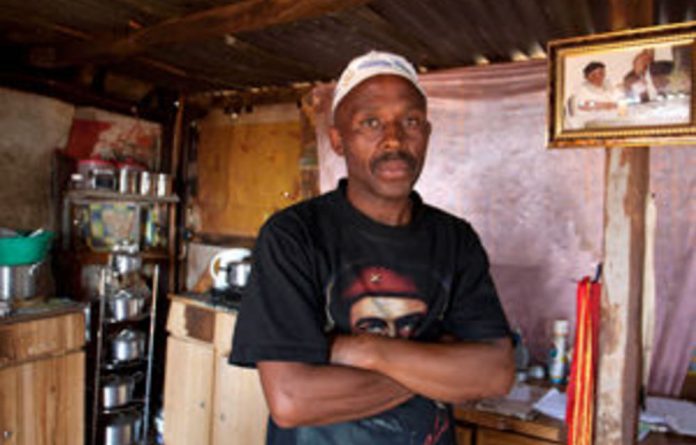 Is it prosecution or persecution of a poor protesting community? There are two radically different interpretations of the prosecution of 14 people arrested during and after violent service delivery protests in Themb’elihle, south of Johannesburg, last year.

The National Prosecuting Authority (NPA) says a simple matter of tracking down three of the accused out on bail delayed the matter and justice will eventually be done. The residents of Themb’elihle say the courts are being used in an apartheid-style manner to shut them up — and they are not alone. Lawyers, protest veterans and other communities in conflict with the government are increasingly worried by what they see as a clampdown on legitimate expressions of dissent.

“Let me tell you, they perceive Themb’elihle as a settlement that has been protesting for years, and they know others look to us,” says Bhayiza Miya, a community leader who is accused of public violence and intimidation in connection with the protest.

“They are saying to others, ‘look, if you continue with your rubbish, this is what we’ll do to you’. They want to make an example to stop us, to stop everyone from complaining.”

Millions in damages
Miya is among those who were arrested after shops were looted, cars stoned and council property destroyed in Themb’elihle; the total cost of the damage is in the region of R2-million.

Unlike his co-accused, Miya spent more than a month in jail before pro bono lawyers successfully argued that he should be granted bail. Like his co-accused, the case against him was scrapped from the roll of the regional court in Protea, Soweto, in early April. And, like them, he now has to consider the chance that those charges could be brought against him again before he so much as hands a memorandum of demands to a local councillor, even if the odds of a successful prosecution seem remote at best.

Evidence against the group, as is often the case in public protests, is shaky. Some were arrested immediately after throwing stones, police statements state, but others were identified later by the clothes they were wearing.

One suspect says that, far from being part of the protest, he was arrested on his way to work.

None can be linked directly to damaging property, such as setting fire to electricity substations, crimes committed under the cover of darkness and in which no witnesses have come forward.

But prosecutors pursued the charges for seven months and with nine postponements, and say that the matter being scrapped from the roll is just a temporary setback.

To the accused and their lawyers, that looks like trying a little too hard.

“If this were a purely criminal matter then there wouldn’t be any basis to bring it back,” says Teboho Mosikili, an attorney who represented the Themb’elihle group on behalf of the Socio-Economic Rights Institute of South Africa.

“They couldn’t bring a charge sheet, they couldn’t say who was accused of what. Under normal circumstances, this kind of case wouldn’t be coming back.”

NPA denies interference
The prosecuting authority rejects suggestions that it was under political pressure to pursue the matter, and says allegations that the case is being dragged out to keep the threat of prosecution alive, and so prevent more protests, are unfounded.

But that has not laid suspicions to rest. Too much history and too many other incidents suggest otherwise.

“I remember when they appeared the first time and the state opposed bail,” says Zwelakhe Mgudlandlu, a lawyer representing 88 people arrested after protests against high electricity prices in Tembisa on the East Rand, also in September last year. “When we came back the next week the magistrate said they would have received bail on the first appearance if the court had known the content of the charges. There’s nothing there that can be proven — I think those charges were brought to silence them.”

Tembisa, too, saw protests die down after the arrests, even though residents were far from satisfied with the response by government.

“We had these people who would have been violating their bail if they were out in the streets again and other people worried about what would happen to their families if they were arrested and put in jail without bail,” says a leader. “They were sending a message, and it worked.”

That sounds familiar, says Dale McKinley, a former co-ordinator for the Anti-Privatisation Forum, which was involved in many clashes with police during protests. “Our experience was that, in the majority of cases where people were arrested at protests, there was no case from the very beginning, but the prosecutors went through the motions.

“If there was a lot of publicity or a bit of political pressure, then at least there was some attempt to argue the charges, but usually the judicial process was just strung out with no intention to actually prosecute.”

Conspiracy?
Simon Delaney, who previously dealt with the criminal defence of protesters for the Freedom of Expression Institute and worked with legal aid group ProBono, says there is not necessarily a conspiracy to clamp down on dissent. The criminal justice system moves slowly for everyone, and overstretched police are well aware of that.

“The police don’t want to have to spend their time dealing with these kinds of protests,” says Delaney. “They don’t enjoy them. So they round up the leaders. Once you are arrested, well, if you have a previous conviction, you’ll be denied bail, and then you’ll be in jail for more than a year, which is as good as being convicted. If you do get bail then you are out of the game; you can’t risk your defence by going out on the street again. That’s the tactic.”

It is a tactic, several groups say, that reminds them not only of the apartheid-era approach to community demands but also of the approach adopted by the government until the Zuma administration took office.

“The inability of the state to offer any meaningful concessions to these community movements has meant that the state’s only recourse has been repression and the deployment of the various arms of the criminal justice system — in ‘maintaining order’,” wrote McKinley and Ahmed Veriava in a 2005 study titled “Arresting dissent: state repression and post-apartheid social movements”, which dealt with the period between 1999 and 2005. There seems to have been a honeymoon period after Zuma took over the presidency, McKinley says, “a political sense that the authorities shouldn’t go after people so much”, but that has since faded in the face of increasing and escalating service delivery protests.

Though arrests and prosecution have, at least temporarily, halted protests in Themb’elihle and Tembisa, the unintended consequence has been an increase in militancy — and a greater risk of violence when groups return to the streets, as some have vowed to do.

“Arrests do not scare people,” says Simphiwe Zwane, an organiser of the movement demanding formal electricity connections in Themb’elihle, who was briefly detained herself after last year’s protests. “When we call meetings the attendance is still big. If we march again about these things, many people will come.”

That smacks of false bravado; some who were on the front lines in September 2011 have pulled back from anything more than moral support. Others say they would think twice before joining in protests again, or that they would find more covert ways of expressing themselves.

“We burnt tyres because they wouldn’t listen to us,” says a young man who helped to organise skirmishes with the police in September. “Now we see people are arrested so the politicians can make examples of them. Next time we won’t burn tyres where they can see us. We’ll make them feel our pain but we’ll be invisible. Then if they try to arrest people, we won’t let them. We know how to fight.”

Police action belie the claims
In affidavits before a Soweto court, police officers told how they saw particular protesters throw rocks at them, then pulled them out of the crowd, or later identified them by the colour of a shirt.

But watching skirmishes between police and protesters in Themb’elihle south of Johannesburg over several days in September did not give the impression of targeted arrests. “Those people, I think we must go to them and arrest them,” I heard a commander tell a large group of police in the dark. For the next half an hour, groups of police emerged from the township with mostly scared young women in tow, while mostly young men jeered at them from under cover.

On a different night, I saw that groups of people stoning passing cars within sight of an impromptu police encampment were ignored; arresting them would have been near impossible. But youngsters hiding in their homes as running battles raged during daylight were arrested – sometimes on the basis that they looked guilty — despite fierce protests by their mothers.

Leaders faced a different form of capriciousness. The day after Themb’elihle community leader Bhayiza Miya was granted bail (“there is a strong possibility that if [he] is released the protest action will ensue yet again”, the state had argued), his colleague Simphiwe Zwane was picked up by police. She spent a weekend in the cells before being released without charge. The police could not explain why she was detained more than a month after the protests had ended, she told me. — Phillip de Wet