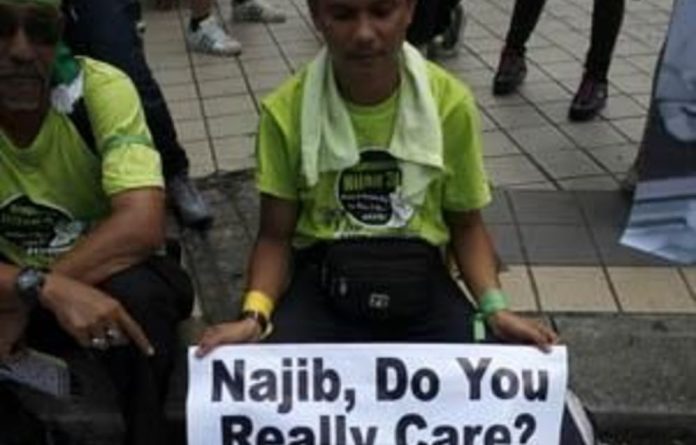 Up to 20 000 protesters calling for fair elections and greater accountability marched on Kuala Lumpur’s centre on Saturday in a show of force that will test the Malaysian government’s reformist pledges and may affect the timing of national polls.

Police shut down much of the city centre and closed off the historic Merdeka (Independence) Square with barriers and barbed wire, enforcing a court order that the protesters should not enter the symbolically important site.

The Bersih (Clean) group that is leading the protest says it will obey the ban but will march as close as possible to the square, raising the possibility of a repeat of violent clashes that marred Bersih’s last major protest in July 2011.

“Now it looks like we will have to fight for our right to gather at Merdeka Square as well as fight for free and fair elections,” said Muhammed Hafiz, a 28-year-old store clerk who was preparing to join the protest.

Organisers hope the protest will draw 100 000 people, including thousands demonstrating against a controversial rare earths plant being built by Australian firm Lynas on the country’s east coast. That would make it the biggest protest since the “Reformasi” (Reform) demonstrations in 1998 against then Prime Minister Mahathir Mohamad.

A delicate challenge
A police official estimated the protesters numbered 15 000 to 20 000 by midday with just one arrest reported.

The protest is a delicate challenge for the government of Prime Minister Najib Razak, possibly affecting the timing of elections that he is preparing to call as early as June.

A violent response by police would risk alienating middle-class voters and handing the advantage to the opposition in what is shaping up as the closest election in Malaysia’s history, possibly forcing Najib to delay the poll date.

But Najib must be mindful of conservatives in his party who are wary that his moves to relax tough security laws and push limited election reforms could threaten their 55-year hold on power.

Last July’s rally, more than 10 000-strong, ended in violence when police fired tear gas and water cannons at the yellow-shirted protesters, drawing criticism of a heavy-handed response and sending Najib’s popularity sliding. His approval rating has since rebounded to 69%, according to one poll.

Watershed for Najib
Bersih, an independent movement whose goals are backed by the opposition, has a history of staging influential rallies as Malaysians have demanded more freedoms and democratic rights in the former British colony that has an authoritarian streak.

“The younger generation, especially my generation, want to be involved. Look at Lynas and Bersih. We cannot be quiet,” said 19-year-old university student Chan Mei Fong.

The July protest was a watershed moment for Najib, prompting him to promise reform of an electoral system that the opposition says favours the long-ruling National Front coalition.

The National Front is trying to recover from its worst ever election result in 2008 when it lost its two-thirds majority in parliament, giving the diverse, three-party opposition led by former finance minister Anwar Ibrahim real hope of taking power.

Voting irregularities
Najib has replaced tough security laws — ending indefinite detention without trial — relaxed some media controls, and pushed reforms to the electoral system that critics have long complained is rigged in the government’s favour.

A bipartisan parliamentary committee set up by Najib this month issued 22 proposals for electoral reform, including steps to clean up electoral rolls and equal access to media.

But the government gave no guarantee that any of the steps will be in place for the next election.

Bersih says the proposals do not meet most of its key demands, including lengthening the campaign period to at least 21 days from the current seven days. It also wants an independent audit of the electoral roll and international observers at polling stations. Bersih and opposition parties say they have unearthed multiple instances of irregularities in voter rolls, including over 50 voters registered at one address. — Reuters