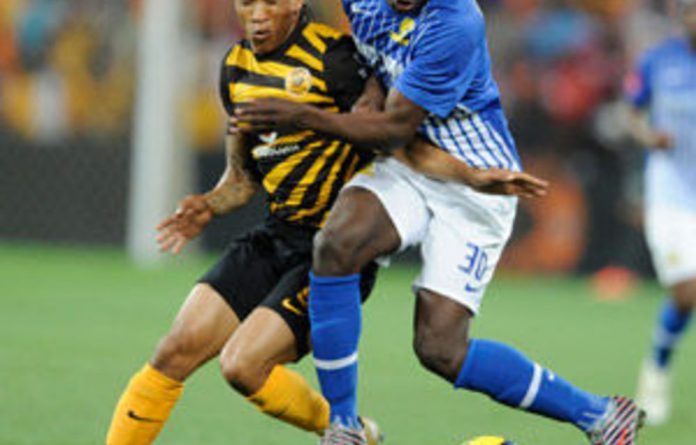 The win preserves the Soweto side’s hopes of challenging for the title, however unlikely, as they are on 43 points with three games remaining — nine points behind log-leaders Orlando Pirates on 52.

Sundowns came into the match three points adrift of the Buccaneers, but the loss will come as a crushing blow to their title hopes.

Sthembiso Ngcobo put the AmaKhosi ahead just before the hour mark, which sent Sundowns in frantic search of an equaliser, while leaving themselves vulnerable in defence.

Three minutes from time Siphiwe Tshabalala exploited the gaps in the Brazilians’ defence to score Chiefs second goal and seal the match as a contest.

In the first-half both teams had their chances, but poor finishing meant the pair of goalkeepers, Wayne Sandilands for Sundowns and Itumeleng Khune for Chiefs, had little difficulty in denying the opposition.

Testing times
In the fourth minute, Ngcobo for Chiefs made a probing run down the left but Sandilands held his line well from a tight angle and pulled off an early save.

Sundowns midfielder Lebohang Mokeona went on a surging run in the 12th minute on the left touchline, and his swinging cross presented some problems for the Chiefs’ defence before the ball was cleared close to the line as the home side came close to conceding.

Hlompho Kekana tested Khune with two long range shots in the first period with the first coming in the 17th minute. In the 37th minute Kekana again tried his luck from distance, but it was straight at the Chiefs keeper.

Nearing the interval, the visitors had been dominating play with Chiefs relying on quick counter-attack that lacked fluency in the final third.

In the final minute of the first-half Mokeona held the ball up in the middle before reeling off a shot from the edge of the area straight at Itumeleng Khune.

In the 58th minute, Ngcobo was left one-on-one with the keeper, before a Sundowns defender came to the rescue but the Chiefs’ striker kept chasing and won the ball again.

With Sandilands stranded outside his box, Ngcobo calmly slotted the ball into the open goal to make it 1-0 to the hosts.

Purpose
Chiefs came alive after the goal and they began to attack with purpose.

In the 71st minute, Josta Dladla had a golden opportunity to put the game beyond reach for Sundowns. He received the ball in the area and had plenty of space but was unable to find the vacant net with Sandilands pulling off a vital save.

Four minutes later, Tshabalala stepped up to take a free kick just outside the area on the right hand side, but his trademark left-footed thunderbolt went straight over goal.

Chiefs thought they had a penalty when Tshabalala was seemingly brought down in the area but he was instead yellow-carded for diving.

Sundowns went in desperate search of an equaliser but every time they lost the ball they were left wide open at the back.

In the 87th minute, Chiefs sealed the deal when Sundowns were again caught out at the back.

Tshabalala weaved his way down the left before reeling off an unstoppable shot into the roof of the net to secure the three points. — Sapa