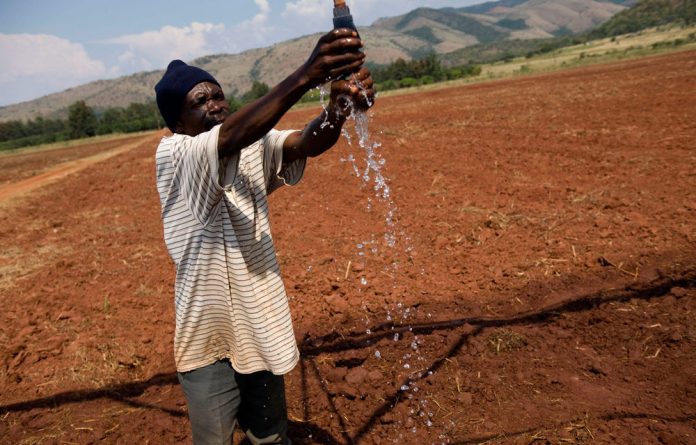 The impact of water scarcity on crop farming will soon be one of SA’s biggest problems. We may need to look across beyond our borders for a solution.

Two decades of high rainfall have masked South Africa’s traditional water scarcity. To solve looming problems the country will have to work with its neighbours to share water and agriculture resources, as well as reallocate its internal resources.

Traditionally, South Africa has 15-year wet and dry cycles. The general trend indicates that the next dry cycle should start this year. But since the dawn of democracy unusually high levels of rainfall have made water seem limitless and its price has stayed low, says Dr Theo de Jager, vice president of AgriSA.

At the moment the country produces a surplus from farming, even though it is the third-driest country per capita in the continent, he said. But with growing water costs and lower rainfall looming this could dramatically change, he said.

“The current government has never had to manage a drought … You think people are angry about e-Tolls, imagine how angry they will be when the costs of their food shoot up as harvests drop,” he warned.

This comes after a recent announcement by Edna Molewa, minister of environmental affairs, that due to infrastructure costs water tariffs would probably be increasing at a rate exceeding inflation.

Risk to development
“The changing climate means that the value of water has to be seen differently,” says Dr Antony Turton, a private water expert. Instead of it being a resource that has to be bought from the department of water affairs, “it has to be seen as a risk to development, much like climate change. Any future plans therefore have to involve a lowering of water intensity and trade-offs between the different sectors of the economy.”

The psychology also has to change, says Turton. Every drop of water has to be seen as “borrowed” from the cycle, and then returned. “Water can’t just be poured out of a tap, paid for, and then forgotten. People have to understand that water cannot be created and what we have now is as much as there ever will be.”

This will encourage a view of water as a resource that belongs equally to everyone, and will move people towards conserving and reusing it.

South Africa does not have a monopoly on problems with water supply, and may benefit from seeing how other countries are dealing with the broader implications of scarcity issues.

Dr Delli Priscoli, a senior advisor at the United States Army Corps of Engineers, says South Africa is beginning to face the same problem as his own country: how to reallocate water between sectors. In a developing country, the problem is normally how to get water to people, but here the government now has to decide which sectors are the most important and need preferential access.

But he believes this is one area where people do come across the lines that divide them to find equitable solutions. “Water is essential for all the core drivers of economic growth and because we all rely on it, we talk about it and work out fair allocations,” says Priscoli. “We do not fight over it … and this makes it a force of social cohesion.”

Priscoli says discussions about water should extend across the whole of sub-Saharan Africa. Every major river in the continent runs through several countries, so they depend on each other.

A solution for the southern tip of the continent would be to grow the agricultural sectors of countries such as Zambia, where there is more than enough rainfall.

Johan van Rooyen, the national director of planning at the department of water affairs, believes this would reduce the burden on South Africa to provide cheap water for irrigation — over 60% of our water is used for irrigation — and also stimulate neighbouring countries.

South Africa would be able to import the food Zambia grows and also get growing markets for its own goods.

Van Rooyen says that as climate change progresses, along with the expected drop in rainfall, this would help mitigate many of the problems that the country faces with ensuring food security.

Farming out production to other countries is a global trend, say Margaret Catley-Carlson, patron of the Global Water Partnership. As prosperity increases, people start accessing food that requires more water to produce. With each calorie we consume taking one litre of water to produce, and with a booming population, this is not sustainable in water-scarce regions, she said.

Already, countries like Israel are stopping local production of water-intensive crops, preferring instead to import them. They are now choosing “the most sensible crop-per-drop”, she said. In the case of South Africa this should mean a “serious look” at the viability of thirsty crops such as sugarcane, she says.

By relying on this “virtual water” from its neighbours the country should then be able to free water for other economic activities.