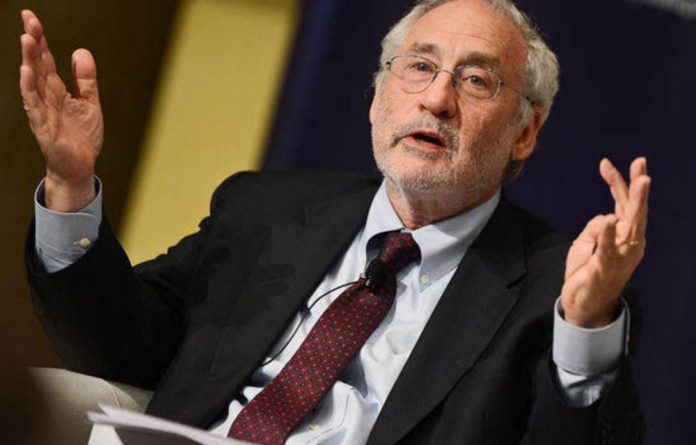 With a reputation that is a resilient alloy of Nobel prize-winning intellectual credentials, World Bank experience and the apostate global celebrity he built when he became a critic of market orthodoxy, Joseph Stiglitz gets on front pages every time he enters the South African economic debate.

This week it was a call for intervention to weaken the rand to protect local jobs and industry.

“Do not let exchange rates continue to appreciate,” he said in Cape Town. “You are going to have to intervene. Direct intervention in the exchange rate is not costless, but it is less costly than letting your exchange rate appreciate.”

We are used to hearing this kind of argument from trade union federation Cosatu and we are getting more and more of it from the manufacturing sector, most volubly in the person of PG Group chief executive Stuart Jennings, but they are readily dismissed either as economic revanchists longing for the 1950s, or as seekers after corporate welfare.

Locked in combat with private sector economists and the treasury, they certainly do not move the needle on the debate in the way that a gilded outsider can.

The Stiglitz effect
But there is more to the Stiglitz effect than his starry CV. Unlike Paul Krugman, the Nobel laureate who has been pushing the Obama administration hard to adopt more aggressive stimulus measures in his New York Times column, Stiglitz has a platform here by government invitation and his interventions bear the personal imprimatur of Economic Development Minister Ebrahim Patel, who appointed him to his ministerial advisory panel two years ago.

Stiglitz is now a regular visitor and a standard-bearer for a more interventionist policy in exchange rates and capital controls, industrial strategy and tariffs.

He is regularly the headline act as Patel seeks to create — through a series of carefully formulated debates and public events — a new policy consensus that fills up the credibility vacuum created by the financial crisis and global recession.

Stiglitz’s impact in these discussions is increasingly to counter both in the public discourse and government circles — the policy preferences of the treasury and the South African Reserve Bank.

Patel controls none of the heavy artillery they have at their disposal, but years of experience in the asymmetric warfare of union leadership have taught him to fight smart — and Stiglitz is a resource he deploys with great effectiveness.

Moral pressure
This week’s remarks on the rand echoed the kerfuffle six months into his job as minister when (quickly denied) reports that Patel wanted major intervention to weaken the rand shaved 2% off the currency in hours.

More importantly, perhaps, they came just days after the Reserve Bank governor, Gill Marcus, made it clear why she felt intervention was a nonstarter. On Friday last week, the Financial Times — probably the most influential public platform available for reaching the global investment and policy elite — published a weighty article by Marcus, which explicitly made the case against intervention.

Marcus seems to have been aiming at two objectives. First, to apply some moral pressure in the currency wars in which central banks are caught up. She argued that the rich world’s response to the financial crisis — near-zero interest rates and printing money — had placed an unfair adjustment burden on the smaller countries that were not in a position to join the race to the bottom. Although inflows of capital could be helpful, she said, “one can have too much of a good thing”.

Big inflows of cash chasing the higher yields offered by South African bonds have played an important role in putting upward pressure on the rand. When they are just as suddenly reversed in response to policy moves elsewhere, the volatility can be brutal.
“It is time advanced economies did more to consider the effects of excessive and volatile inflows in emerging markets,” Marcus said.

Second, she wanted to reassert the bank’s determination to hold interest rates at relatively high levels to avoid currency interventions that target a level for the rand and reject capital controls that would limit hot-money flows.

Aggressive interventions
Current interest rate levels, she said, were necessary to fight inflation, which was brimming over the 6% upper limit on its target range; capital controls were unproven and probably would not work because so much rand trade took place offshore; and targeting an exchange rate for the rand would be hugely expensive, risky and probably ineffective.

Aggressive interventions of this kind would “only lead to the intensification of trade and currency wars, which is not in the longer-term interests of the global economy”, she said. While that argument was settling in around the world, reassuring the bond markets, rallying other small-country central bankers and perhaps being politely ignored by Ben Bernanke and Mario Draghi, a man under contract to advise the government was saying exactly the opposite.

One of the enjoyable things about Patel’s tenure, at least for policy wonks, has been his determination to foster debate and ensure that we have a richer set of economic policy choices available to us.

A similar effect was produced by the work of the Harvard group commissioned by Trevor Manuel — which drew in highly respected and sometimes unorthodox figures such as Dani Rodrik &nmdash and also by the National Planning Commission, also at Manuel’s instance.
Their work, however, was based on detailed and locally centred research, not on the kind of bold and clearly political pronouncements of Stiglitz. Their research is a real resource for both debate and policymaking.

We should be cautious about setting Stiglitz up as an unofficial minister of finance who may find South Africa a convenient staging post in his campaign for reform of the global financial system and who may not have paid as much detailed attention to the particular character of its problems and opportunities.