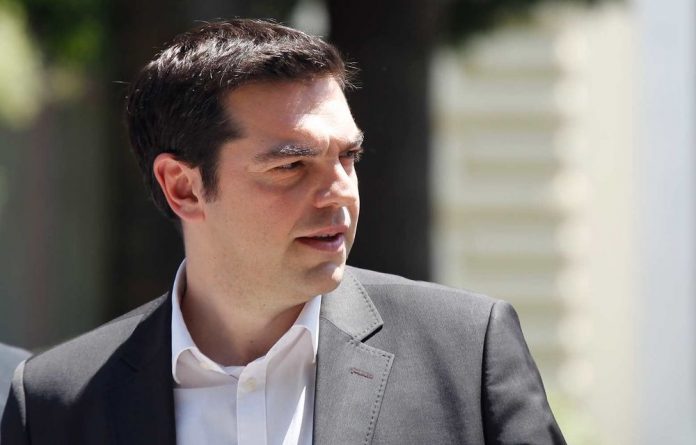 World leaders backed keeping Greece in the eurozone on Saturday and vowed to take all steps necessary to combat financial turmoil while revitalising a global economy increasingly threatened by Europe‘s debt crisis.

A summit of the G8 leading industrialised nations came down solidly in favour of a push to balance European austerity — an approach long driven by German Chancellor Angela Merkel — with a new dose of US-style stimulus seen as vital to healing ailing eurozone economies. But it was clear that divisions remained.

“We commit to take all necessary steps to strengthen and reinvigorate our economies and combat financial stresses, recognising that the right measures are not the same for each of us,” the leaders said in a joint statement issued at their meeting at the Camp David presidential retreat in Maryland.

The overarching message from the summit hosted by President Barack Obama reflected his own concerns that the eurozone contagion, which threatens the future of Europe‘s 17-country single currency bloc, could hurt the fragile US recovery and his re-election chances in November.

With Greece‘s political and economic upheaval high on the summit’s agenda and stoking concerns over instability in Spain and Italy, Group of Eight leaders sought to calm the situation.

In the first line of their final economic communiqué, they essentially endorsed calls to broaden Europe‘s focus beyond German-backed fiscal belt-tightening, calling it “our imperative” to promote growth and job creation.

Anxious to quell investor fears, the G8 said: “We reaffirm our interest in Greece remaining in the eurozone while respecting its commitments.” But leaders offered no specific prescription for extracting Athens from its worsening crisis.

It was unusual for the often-bland G8 communiqué to single out a relatively small nation. But fears that a political stalemate in Greece would lead to its departure from Europe‘s monetary union at unknown costs to the financial system and global economic stability have spooked markets.

Greek voters this month toppled a government that had agreed to painfully austere terms of an international bailout plan, and uncertainty hangs over the next election set for June 17.

Spain too has roiled markets by revealing huge bad loans in its banking system as it struggles to rein in its budget while facing recession.

Merkel, increasingly isolated by a French-led push for a more growth-oriented approach, sought to play down the differences, saying: “Solid finances and growth belong inseparably together and should not be put into contrast.”

Obama, who has pressed Europe for more growth-boosting measures like those he pursued at home, used his closing statement to remind eurozone leaders that the stakes were high and there could be “enormous” costs if they failed.

“Growth and jobs must be our top priority,” he said, reaffirming that Europe has the capacity to meet the challenge.

Marc Chandler, currency strategist at Brown Brothers Harriman, said: “It is significant that a group as weighty as the G8 backs Greece and reinforces the idea that Europe needs a strong union. It strengthens its hand.”

In another move to shore up shaky global growth, the G8 leaders said they would monitor oil markets closely and stand ready to seek an increase in supplies if needed. While crude oil prices have declined by 10% over the past month, the threat of tighter sanctions on Iran loom next month.

Budgetary discipline, with a growth strategy

The mountain cabins at Camp David where a shirt-sleeved Obama hosted the G8 leaders contrasted with recent tense meetings in European capitals about a sovereign debt crisis that just keeps getting worse.

The economic communique endorsed a recent political shift away from the budget-cutting austerity that has been championed by Merkel and British Prime Minister David Cameron as the route to prosperity.

Instead it recognised a need to combine budgetary discipline with a growth strategy. This strengthens the hand of newly elected socialist French President François Hollande before a crucial European Union dinner on Wednesday to discuss growth.

The G8 said it had “an interest” in specific measures from Europe, signalling it wants concrete steps from a dinner meeting of European Union leaders later this week and an EU summit in June.

Cameron, after an early morning gym workout with Obama, said he detected a “growing sense of urgency that action needs to be taken” on the eurozone crisis. London relies heavily on international finance and banking instability would strike a fresh blow to an economy already in recession.

“Contingency plans need to be put in place and the strengthening of banks, governance, firewalls — all of those things need to take place very fast,” he told reporters.

European leaders seemed keen to stress that they would stand firm in protecting their banks, after news of escalating bad loans raised the specter that rescuing Spain‘s banks would crash the eurozone’s fourth largest economy.

Hollande suggested using European funds to inject capital into Spain‘s banks, which would mark a significant acceleration of EU rescue efforts. But there was no direct mention of Spain in the communiqué or any indication of action leaders would take to combat the financial stresses.

Obama and Merkel, on opposite sides of the growth-versus-austerity debate almost since the US president took office in 2009, discussed what one White House aide called an “emerging consensus” in one-on-one talks after the Camp David summit.

There already had been signs of a softening in Germany‘s austerity stance as the G8 meetings began.

Germany‘s largest industrial union, IG Metall, struck its biggest pay deal in 20 years early on Saturday. The 4.3% pay increase, more than double Germany‘s inflation rate, will boost worker buying power in the eurozone’s richest nation and lift consumption. That is something the United States has urged as a means to bolster overall growth throughout the world’s second largest economic region.

G8 leaders also raised pressure on Iran over its nuclear programme, which they suspect has military objectives, by committing to a common approach. They pledged to implement sanctions fully against Tehran and indicated they would act together to lower oil prices if needed.

“Our hope is that we can resolve this issue in a peaceful fashion that respects Iran’s sovereignty and its rights in the international community, but also recognises its responsibilities,” Obama told reporters.

The Camp David summit kicked off four days of intensive diplomacy that will test world leaders’ ability to quell unease over the threat of another financial meltdown as well as plans to wind down the unpopular war in Afghanistan.

After the Camp David talks, Obama and several of the G8 leaders headed to his home town of Chicago where he will host a two-day Nato meeting at which the Afghanistan war will be the central topic.