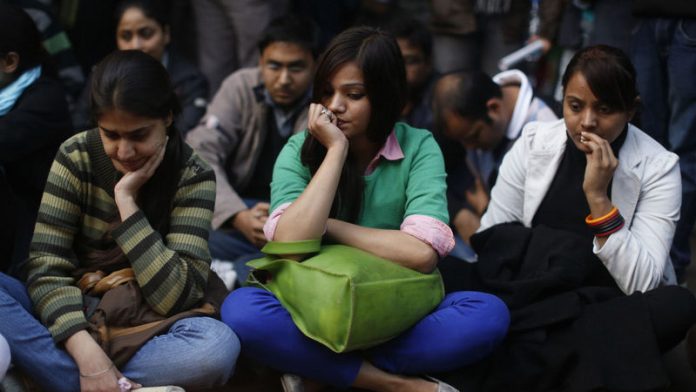 Her boyfriend, who was also beaten up and thrown off the bus after the woman had been repeatedly raped, managed to pull her to safety just in time, police are set to allege in a 1 000-page charge sheet to be presented in court on Thursday.

The 23-year-old female medical student, whose ordeal has brought simmering anger about widespread sex crime in India to the boil, bit three of her attackers as she attempted to fight them off, local newspapers and TV reports said.

These injuries on the suspects, as well as forensic evidence such as blood, semen and hair samples and the testimony of the injured boyfriend, are expected to form the main evidence against the accused, reports and police sources said.

Five men have been arrested and are expected on Thursday to formally face murder and rape charges in a fast-track court set up to try them.

India's Home Minister Sushilkumar Shinde said on Tuesday that the suspects risked the death penalty if found guilty and the case against them appeared very strong.

A sixth suspect is thought to be aged 17, meaning he would face a juveniles' court, but he is undergoing a bone test to determine his age, a spokesperson in the Delhi police control room said on Wednesday.

"The woman and her friend were stripped and thrown out of the bus," The Indian Express reported on Tuesday. "Her friend pulled her away when he saw the bus reversing to run her over."

Joyride
The Times of India said the charge sheet was likely to begin with details on how the driver of the private vehicle, who allegedly took part in the rape, got his group of friends together and set out for a joyride.

One of the charges against the accused relates to the destruction of evidence, the paper said, since the driver had tried to wash the bus and had burned the clothes that were snatched from the victim.

The woman died at the weekend after a 13-day struggle to survive injuries so grievous that her intestines had to be removed. She also underwent three major surgeries and suffered a cardiac arrest before being flown to Singapore.

The brutality and horrific nature of the attack has led to protests in the capital and elsewhere, and has prompted calls for the death penalty for the rapists.

The government, which has faced a wave of public anger over the attack, on Tuesday set up a special 13-member committee to look into safety issues and review the functioning of Delhi police on a regular basis.

A panel to recommend changes to the criminal law dealing with sexual crimes was set up last week.

Honoured
Junior Education Minister Shashi Tharoor sparked a debate on Wednesday when he suggested that a proposed new anti-rape law to toughen sentences against sex offenders be named after the dead student.

While much of her identity is known, her name has not been disclosed.

"Unless her parents object, she should be honoured and the revised anti-rape law named after her," Tharoor tweeted.

Victims of sex crimes are granted anonymity to avoid them or their families facing stigma from the crime. – AFP

ConCourt: It’s not just the man whose penis penetrates who is the rapist

In a world exhausted from almost two years of a covid-19, over the past week we got news of yet another worrying turn in the pandemic
Advertising