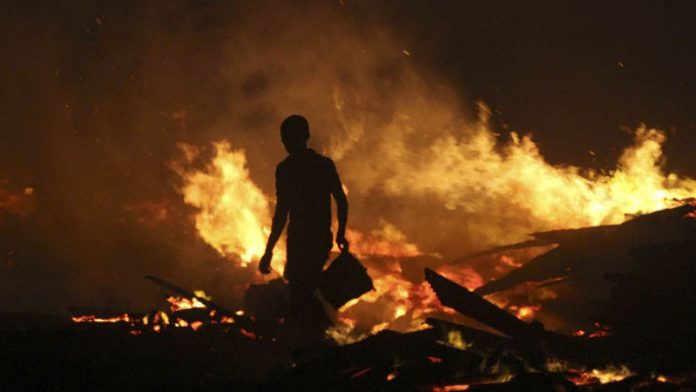 The explosion occurred on Wednesday on a barge seeking to discharge fuel into a tank on a jetty at the port, leading to a fire that sent a huge plume of smoke into the air but which was put out a couple hours after it began.

"There was a ship that was trying to discharge into an oil tank owned by [Nigerian firm] MRS and there was a fire, but I don't yet have any details as to what led to the fire," said Ibrahim Farinloye of the National Emergency Management Agency.

An MRS security official who asked not to be named told AFP "it was a fuel explosion" from the barge.

"We were lucky that rescue efforts came in time. The fire could have caused severe damage, but the fire has now stopped and there are no fatalities," he said.

Farinloye and the Red Cross said four people were wounded.

Journalists prevented from taking pictures
"Nobody died. We only recorded four injured people who had been taken to hospital for treatment," said Iteogu Adaku from the Red Cross. "We have also succeeded in extinguishing the inferno before it could spread."

"I felt the explosion from where we are," said Charles Osagie, who works at an import and export office in the district.

Around a dozen firefighters battled to douse the flames as company security officials prevented journalists from taking pictures or making telephone calls, including by confiscating phones for a time.

The phones of some rescue workers who were taking photos were seized as well.

Nigeria is Africa's largest oil producer and its most populous nation with some 160-million people. Lagos is considered the continent's second-biggest city after Cairo. – Sapa-AFP