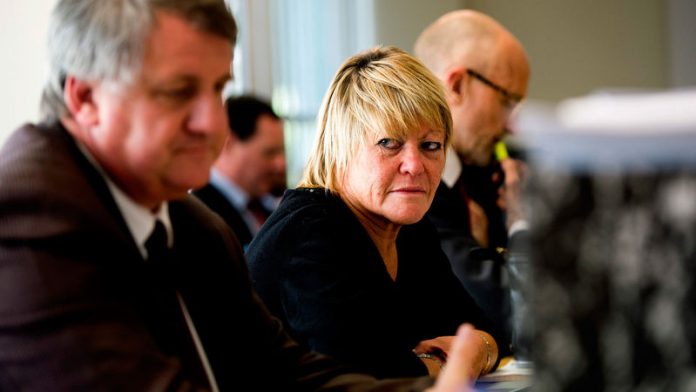 "We decided [advocate Chris] Smith would withdraw … in order to avoid the unseemly spectacle that would have brought the NPA into disrespect," said advocate Sibongile Mzinyathi at the disciplinary hearing of colleague Glynnis Breytenbach  on Wednesday.

Breytenbach was suspended last April. The National Prosecuting Authority said it was because of her handling of a criminal case by two mining companies involved in a rights dispute – Imperial Crown Trading (ICT) and Kumba/Sishen.

But she claims it was to protect Mdluli and stop the prosecution against him and a colleague, Colonel Hein Barnard. Director of prosecutions and head of the Specialised Commercial Crimes Unit (SCCU) Lawrence Mrwebi has already testified that he felt the charges should be withdrawn because there were loopholes in the case.

The case belonged rather with the Inspector General of Intelligence (IGI) and the auditor general, Mrwebi said.

Last week, he explained that he had a meeting with Mzinyathi and Breytenbach, who had disagreed with him when he said the case should be withdrawn and then reinstated, when the loopholes had been attended to.

After Mrwebi stepped down from his cross-examination on Wednesday, Mzinyathi was sworn in to add clarity to what happened. He was referred to a memorandum by Mrwebi dated December 4 2011.

Mrwebi wrote that in terms of the NPA Act, and after consultation with the director of prosecutions in Gauteng, he had decided that the matter fell squarely with the IGI.

Illegal process
Mzinyathi said in his view this process was illegal and he met Mrwebi on December 5. Mrwebi advised him that he still needed to do further research on how it should be handled from an intelligence aspect.

Mzinyathi left the meeting expecting to be told later what Mrwebi's investigations had yielded. He received the memorandum dated December 4 on either December 6 or 8, but certainly after December 4, saying the charges should be withdrawn.

Mrwebi has previously testified that the date of December 4 is a mistake and should have been December 5.

Mzinyathi said he arranged a meeting with Mrwebi to discuss this and the soonest they could meet was December 9.

During cross-questioning later it emerged that he had gone with a Brigadier van Graan to the IGI on December 8 and spoke to the IGI's adviser Jay Govender, who told them that their mandate did not include the investigation of crimes. It was the mandate of the police.

Back to Mzinyathi's testimony, he said that on December 8, he had sent an email to Mrwebi, saying he felt there was a prima facie case against Mdluli and his co-accused and that he did not find his way clear to the matter being withdrawn.

He wrote that he hoped the decision had not been communicated to Mdluli's lawyers "because such a communication may have to be altered". Then, at the meeting on December 9, Mrwebi responded to Mzinyathi's email of the previous day by saying there had been allegations in the intelligence environment and a complaint emanating from them, that needed to be handled by the office of the IGI. He said the investigation might require classified documents that the police did not have access to.

Confidential sources
Earlier on Wednesday, Mrwebi told the hearing as further context to his decision to withdraw, he had been visited by two legal counsel from the intelligence department who had alleged that a "prosecutor Y" had been threatening people to do as he says and this formed part of his decision that intelligence should get involved with the investigation. He would not say who his confidential sources were.

Mzinyathi continued his testimony of the December 9 meeting by saying that Mrwebi said he had told Mdluli's lawyers that charges would be withdrawn and the only thing he could do was to ask the national director of public prosecutions (NDPP) to reverse his decision.

Advocate Smith, who was prosecuting the matter in court, had already been instructed to withdraw the charges and Mrwebi was not prepared to give Smith different instructions. It would put him in a difficult position in terms of getting opposing instructions from his seniors. The decision was then taken that Smith would withdraw the charges to avoid a public spectacle.

Although they had different views on the case, "We accepted that the case on the 14th will be withdrawn," said Mzinyathi. His understanding was then that the office of the IGI would be involved and that depending on what further investigation yielded, the matter would be re-enrolled.

Advocate Wim Trengove asked Mzinyathi if he knew that he sent Mrwebi a letter, also dated December 4, to Mdluli's lawyers at the same time as he sent a letter to Mzinyathi, communicating the decision.

"I did not know that," he said. He agreed with a submission by Breytenbach's counsel that the prosecuting team believed that only one more postponement would be required and they would be ready to go to trial.

Serious allegations
As the hearing continued, Mzinyathi said that by coincidence, at the same time, December 5, he was called to a meeting with then NDPP Menzi Simelane and the deputy NDPP Silas Ramaite and given two lever arch files relating to a complaint laid by ICT lawyer Ronald Mendelow, relating to Breytenbach's conduct while investigating the mining case.

He was asked to handle the matter and keep them informed of developments. He regarded the allegations against her – which included that she was involved in getting an advocate to influence a witness – as serious.

He then handed this to Mrwebi, as he felt he should know about it, as it involved a direct subordinate – Breytenbach is a regional head of the SCCU and a director of prosecutions.

The hearing ended with Trengove reading off a note passed to him by Breytenbach, and he asked Mzinyathi if on April 1 last year she and a colleague Jan Ferreira took a memorandum to Mzinyathi asking for a review of Mrwebi's decision.

"You said to her 'you can do this you want to, but they are going to kill you'."

"I never said that," said Mzinyathi.

The hearing continues on Thursday. – Sapa