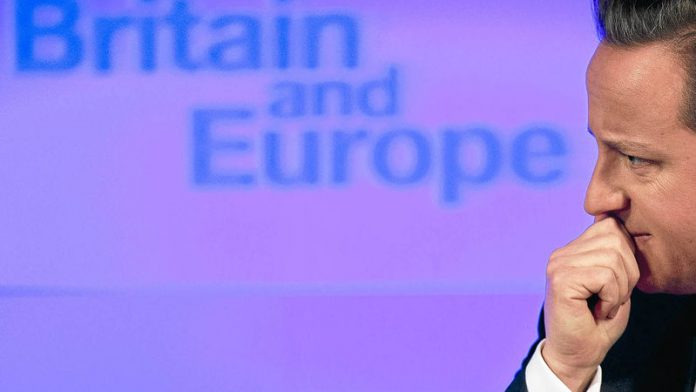 David Cameron has outlined the scale of his ambition to transform the terms of Britain's membership of the European Union by calling for the United Kingdom to be exempted from the EU's founding principle: the creation of an ever-closer union.

In his long-awaited speech on the EU, the prime minister cast himself as a modern-day heretic as he pledged to challenge established thinking.

Speaking at the London headquarters of Bloomberg, Cameron confirmed plans to hold an in-out referendum after the next election, but warned: "the biggest danger to the European Union comes not from those who advocate change, but from those who denounce new thinking as heresy. In its long history, Europe has experience of heretics who turned out to have a point." The prime minister said that nothing would be off the table when he put forward demands for the repatriation of a series of powers to Britain if he won the 2015 general election. A new settlement would then be put to voters in a referendum by the end of 2017.

"I believe in confronting this issue, shaping it, leading the debate. Not simply hoping a difficult situation will go away," he said.

Cameron concluded by saying that he would campaign with his "heart and soul" for Britain to remain in the EU if he succeeded in renegotiating its membership terms.

But he declined to be drawn on whether he would campaign for a no vote if he failed to secure changes in the negotiations.

Downing Street had indicated in recent weeks, as the speech was repeatedly delayed, that the prime minister would not set out a shopping list of demands.

But he made it clear that he wanted to challenge the central tenet of the EU: the pledge in the founding treaty of Rome in 1957 to create an "ever-closer union".

The prime minister said: "We understand and respect the right of others to maintain their commitment to this goal. But for Britain – and perhaps for others – it is not the objective. And we would be much more comfortable if the treaty specifically said so, freeing those who want to go further, faster, to do so without being held back by the others."

Cameron made clear that this could be achieved, in part at least, by fully implementing the Laeken declaration of 2001, which said power should be passed back to member states if that was their desire.

"But the promise has never really been fulfilled. We need to implement this principle properly."

The prime minister also made it clear that Britain wanted to extend its opt-out option to aspects of the working time directive.

"It is neither right nor necessary to claim that the integrity of the single market or full membership of the European Union requires the working hours of British hospital doctors to be set in Brussels, irrespective of the views of British parliamentarians and practitioners."

But he said he was prepared to follow the example of Harold Wilson, who renegotiated Britain's membership terms outside a treaty ahead of the 1975 referendum.

"If there is no appetite for a new treaty for us all, then of course, Britain should be ready to address the changes we need in a negotiation with our European partners," he said.

Cameron had to repeat this line after initially fluffing his words. – © Guardian News & Media 2013