The man who put us on the map 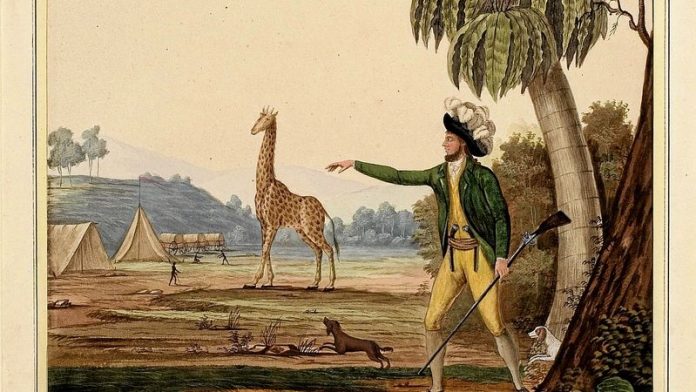 On loan from the Bibliothèque Nationale in Paris, the 3x2m, 223-year-old map has never been on public display and when the current exhibition closes it will apparently be packed away again for 180 years, one year for every day of exposure.

The phenomenal map, which records Le Vaillant’s extensive travels around South Africa from 1781 to 1784, is lavishly illustrated with the indigenous people he met, 66 different species of animals, birds and plants, and about 600 place names.

Looking at the map, one can imagine the king, one of the most watched people in the kingdom, escaping to his attic in Versailles to go on a vicarious journey with his index finger over Mr Badenhorst’s farm, pausing at Camp des Puces (the Camp of Fleas), and hastily traversing the Pays plein de Lions et de Tigres (Country full of Lions and Leopards).

The exhibition in a specially created room at the Iziko South African Museum includes original works by Le Vaillant, watercolours from the Parliament collection, magnificent bird illustrations and precious elephant-folio versions of his bird books from the Brenthurst collection. A man taking a leak can be spotted in one of the illustrations of his journey.

Le Vaillant was among the last people to see the blue antelope (Hippotragus leucophaeus) before it became extinct. His specimen is one of only four extant mounted skins. His leading knowledge in preservation techniques gave taxidermy new significance.

From John James Audubon, widely regarded as the world’s greatest ornithologist, to the latest Roberts Birds of South Africa, there is a debt owed to Le Vaillant. Although we seem to keep on ­changing bird names, we still have Le Vaillant’s cisticola, for example, and the bataleur is among many others he named.

Cultural memes
Born in Dutch Guiana (Suriname) in 1753, he was destined to live through some of the most turbulent years in the history of France: the decline of the monarchy, the French Revolution, the Jacobin Terror and the rise of Napoleon.

Professor Ian Glenn, the curator of the museum, says Le Vaillant literally put South Africa on the map. The cultural memes that came to dominate the literature on Africa originated with Le Vaillant, in particular the hunting expedition.

Glenn points out that Le Vaillant depicts the Gonaqua woman he named Narina as a classical beauty, as if “daintily holding out a cucumber sandwich”.

It may be a Eurocentric imposition but, from his viewpoint, it is not the “cold, objectifying, hostile gaze” of the colonial anthropologist but “a way of giving dignity”.

In an excellent preface to his translation of Travels into the Interior of South Africa Volume 1 (Van Riebeeck Society 2007), Glenn boldly claims that Le Vaillant “became the first investigative reporter on South Africa”.

Le Vaillant, in effect, made his way in under the auspices of a gunner’s mate and feigned illness to disembark at the Cape.

Conditions at the Dutch settlement were kept under wraps by the Dutch East India Company and were largely unknown.

Quintessentially a man of the Enlightenment (he named one of his sons Jean-Jacques Rousseau), Le Vaillant recorded the appalling treatment of the indigenous people, including their murder and, in one sickening account, their use for target practice by settlers.

When the text was published in 1789, a review noted the “injustices, cruelties, robberies, indiscipline, perverse barbarities against the natives” that Le Vaillant had exposed, and another remarked on “his hate for the whites which is no more than a justified horror at their cruelties”.

But for all his travails and trail-blazing, Le Vaillant has not received the credit that is undoubtedly his due. His travels would prefigure the major conflicts that plague the representation of the indigenous.

Hopefully, this exhibition will go a long way towards restoring Le Vaillant’s reputation and, as Glenn puts it, countering the unfortunate “double and mutually reinforcing cultural amnesia produced by figures in cultural wars” who wish us to believe there was “only one mode of colonial, Africanist discourse” in order “to present their own thoroughly modern virtue”.

Former Constitutional Court justice Albie Sachs is bound to art and politics by love and lineage. He chats about this and his years of art collecting.
Read more
Friday

SA artists have used the figure of Nelson Mandela as their muse and metaphor, depicting the many sides of the man people believe they know well.
Read more
Advertising
Continue to the category
Politics