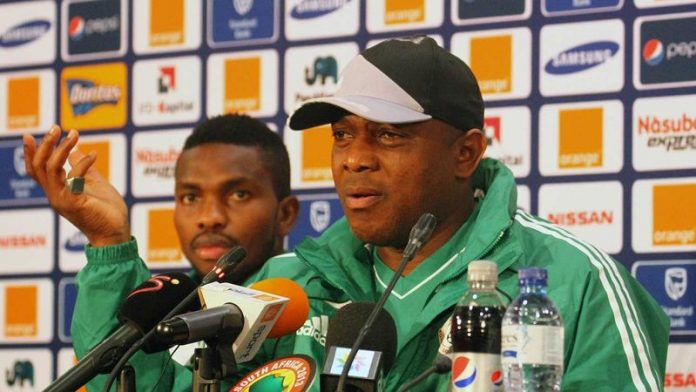 "I am never against white coaches in Africa," said Keshi. "I am happy to work with a quality, experienced white coach, who is better than me, so that I can learn from him.

"But what I don't accept is when you bring in a mediocre 'carpentry' coach from Europe, and tell me that he's better than me. I won't accept that. Meanwhile we have quality African former players, who can do the same thing, but you don't give them the opportunity because they're just black dudes. I don't like that," said Keshi, who has previously coached Mali and Togo.

Keshi qualified Togo for the 2006 World Cup, but was replaced before the finals by German Otto Pfister, who lost all three games.

Should Nigeria and James Kwesi Appiah's Ghana prevail in Wednesday's semifinals, the final will be the first to be contested by two African coaches since 1998, when Jomo Sono's Bafana lost to Mahmoud El-Gohary's Egypt. It's been even longer since two sub-Saharan coaches squared off for the continental trophy.

Keshi will have great insight into Frenchman Patrice Carteron's Malian side, having coached most of the players. "We need to realise that Mali is a footballing nation. They have great talent – I was there. Whatever they are doing, they should be doing it, because of the calibre of the players. Wednesday's game will be as tough as the game against Côte d'Ivoire."

'Emotional fuel'
He said the civil war raging in Mali would provide emotional fuel for the Eagles."It's a shame what is going on in Mali, it's a great country with wonderful people. It's a place I love. But what is going on in the country is not something we should be proud of. The players are thinking about that, that's where their force is coming from."

The former Super Eagles captain also claimed he was indifferent to public criticism in Nigeria. "It doesn't really matter what people think about what Stephen Keshi is doing. You can't force someone to love you."

Keshi, who has been his job since 2011, said this promising Nigerian side needed time to mature. "The progress is coming gradually. It's a team in the making. But to build a very good team, you need three years. We just have to be patient to see the team grow. Some of us don't have patience."

But he also said he was open to offers beyond these finals. "If God grants me the tournament, the next day I could join another country. I'm a professional. It's the same with Jose Mourinho, if he gets a call from a rich team, he goes. I'm here for now, but we'll see if there's anyone out there who wants me."