Risk of renewed violence ‘perilously high’ as Kenyan elections near 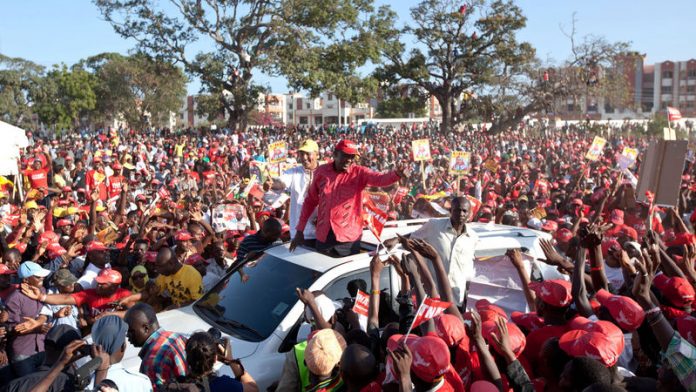 The elections are the the first since deadly post-poll unrest five years ago.

Loyalists of Kenyatta – who with his running mate faces a crime against humanity trial at the International Criminal Court (ICC) for violence after the 2007 polls – dressed in his party's red colours in the sprawling Uhuru park, meaning, like his first name, "freedom" in Swahili.

Backers of Odinga, who in 2007 narrowly lost contested presidential polls that sparked a wave of violence in which over 1 100 people were killed and more than 600 000 forced from their homes, gathered at the national sports stadium.

Campaigning has been intense, with outgoing President Mwai Kibaki – who steps down after two terms in power – making a "passionate plea for all of us to vote peacefully" in a message broadcast on national television on Friday.

"Let us send a clear message to the world, that our democracy has come of age," Kibaki said, adding that Kenya had "mobilised all its security personnel" to ensure elections were calm.

"Every election will produce winners and losers … to those who will not win, your country still needs you," he added.

In one of the most complex polls Kenya has ever held, voters on Monday will cast six ballots for the president, parliament, governors, senators, councillors and a special women's list.

Some 23 000 observers, including 2 600 international monitors, will be deployed, according to the Independent Electoral and Boundaries Commission (IEBC) chairman, Ahmed Issack Hassan.

"The elections should be competitive and not combative … let there be victory without victims," he said, saying that all was ready for election day.

Intimidation and corruption
Leading candidates have publically pledged there will be no repeat of the bloodshed that followed the disputed 2007 polls, but tensions are running high nonetheless.

The ICC trials due later this year have greatly raised the stakes, since should Kenyatta win, the country could face the absence of its president and vice-president for potentially years whilst at The Hague-based ICC.

Watchdogs such as Human Rights Watch have warned that the risk of renewed political violence is "perilously high".

At least 484 people in the country were killed and over 116 000 fled their homes due to ethnic violence last year, according to the United Nations.

The 2007-2008 violence exposed widespread disenchantment with the political class, deep tribal divisions and shattered Kenya's image as a beacon of regional stability.

More checks are in place this time, including better systems to limit vote rigging, greater public awareness of the bloody cost of violence, and a new constitution devolving powers to make the presidential poll less of a winner-takes-all race.

Observers expect some violence in the upcoming polls – all of Kenya's elections have seen some conflict and election-related attacks have already taken place – although foreign diplomats say they are cautiously optimistic.

But some Kenyans in flashpoint areas have packed up ahead of the polls, especially in areas that saw violence last time, or where a Kenyan belongs to a minority ethnic group in that area.

"In most areas, the campaigns have gone fully ethnic as politicians and their cronies continue to raise emotions and inflame passions as they campaign for votes," the Kenya Human Rights Commission (KHRC) has warned.

The rights group has also condemned evidence it has gathered of politicians handing out cash to win votes, and reported accusations of the purchase of identity cards to allegedly block opponents from casting a ballot.

In western Kenya's Kisumu region – an Odinga stronghold, where the Luo people dominate – some members of the Kikuyu tribe have left after warning messages were put under their door, residents told AFP.

On the Indian Ocean coast in the port and popular tourist city of Mombasa, some houses were daubed with black painted crosses late Thursday, although it was not possible to determine for what reason.

There have also been cases in Nairobi and elsewhere of the distribution of leaflets inciting hatred or calling on minority tribes to leave that region. – Sapa-AFP

A respected and robust United States — with all of our flaws, mistakes and missteps — can be good for the defence of democracy, not least in Africa
Read more
Politics

In this week’s 96 by-elections, the trend was the ANC held its ground and grew, while the DA lost big, with minority parties eating into its voter base
Read more
Opinion

As Ugandans prepare to go to the polls in January 2021, the involvement of security forces in the electoral process is a given and political reform seems a long way off
Read more
Africa