In addition, private equity activity is expanding away from the dominant South Africa market according to a report from financial advisory firm Ernst & Young, and the African Venture Capital Association with West Africa accounting for 25% of private equity exits from investments between 2007 and 2012.

Africa’s private equity market is still in its “relative infancy”, with 118 private equity exits or sales recorded between 2007 and 2012, according to the report, but an analysis of 62 of these deals revealed returns of almost double that of the JSE.

Reflecting these positive sentiments, David Marchick, managing director of the Washington-based Carlyle Group – one of the largest private equity firms, managing more than $170-billion in assets – said the group had a number of investments on the verge of being completed or in the  “very strong” pipeline.

“We are extremely optimistic about prospects for success in this region,” he said at a recent briefing held with the African Development Bank and the University of Cape Town’s Graduate School of Business.

The firm aims to invest $500-million on the continent. With Standard Chartered Bank and the Pembani Remgro Infrastructure Fund, it took up a $210-million minority share of the Tanzanian-based Export Trading Group in November. The group trades agricultural commodities in Africa, India and China.

Carlyle is targeting medium-sized, high-growth businesses that are consumer oriented because two-thirds of the growth seen in the region is consumer related, said Marlon Chigwende, co-head for sub-Saharan Africa at the Carlyle Group. 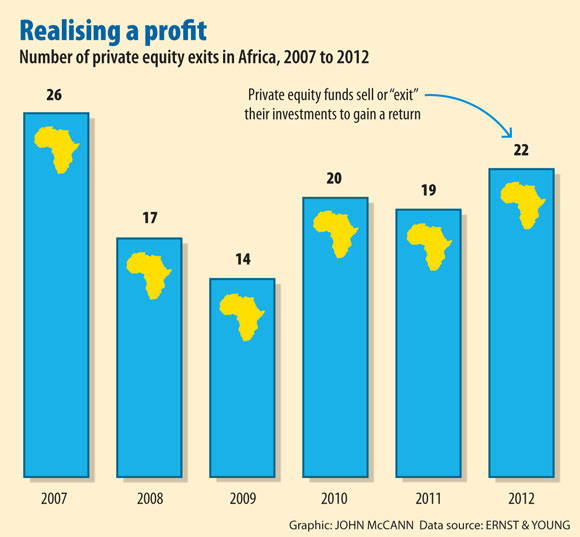 “However, these exits also demonstrate the overriding investment theme in Africa – the rise of the consumer. As the region’s economies grow and disposable incomes rise, financial services are becoming a more important part of the economic landscape and are therefore attractive not only to private equity investors but also to strategic buyers looking for a foothold in new markets.”

The consumer theme was also reflected in activity in other sectors, including food and beverages, and telecommunications.

Between 2010 and 2012, regional companies became the most prevalent buyers in exit deals, accounting for half. “This points to an increasingly pan-African market that is being driven by local players consolidating fragmented industries across the continent,” said the report.

South Africa was still a dominant player, accounting for 42% of deals, but this is against the profitable West African region. “By region, those markets that are arguably least mature in private equity terms – East and West Africa – generated the highest returns,” said the report.

Critical to driving this growth has been the “concerted effort” by many African governments to improve the environment in which businesses and investors operate, the report said.

Less liquid, better returns
Private equity is ownership of a company that is not traded or quoted on a stock exchange, but held privately.

Investment in mature businesses can typically come from institutional investors or private equity companies, or from venture capital firms investing in small enterprises that are starting out. Deals can often involve the purchase of publicly traded firms who are then delisted.

Private equity investments often require longer holding periods to allow for the turnaround of the underlying business. Investors realise the value of their asset by selling out of a business or exiting. Because private equity is less liquid than publicly traded equity, investors expect better returns. – The Economist, Investopedia

Africa: The place to be for booming private equity