Man U on title brink, Suarez in ‘bite’ shame 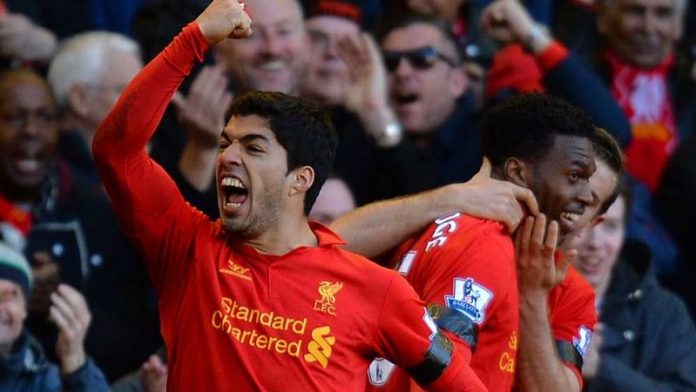 This, while Liverpool striker Luis Suarez created controversy once again.

Spurs roared back from behind to stun defending champions City at White Hart Lane and revitalise their own push for Champions League qualification.

City's defeat left United's 13-point lead intact and means that Alex Ferguson's side can secure an unprecedented 20th league crown if they win at home to Aston Villa on Monday.

It also left Spurs just one point beneath fourth-place Chelsea, who were prevented from reclaiming third place by a 97th-minute goal from Suarez in a 2-2 draw at Anfield.

However, Suarez had earlier appeared to bite Chelsea defender Branislav Ivanovic on the arm in an incident that looks likely to yield retrospective punishment from the Football Association. Spurs struck three times in the last 15 minutes through Clint Dempsey, Jermain Defoe and Gareth Bale to floor City, who had led through Samir Nasri since the fifth minute.

"We had everything in order. It is strange. It is not a correct result, but congratulations to Tottenham for the win," City manager Roberto Mancini told Sky Sports. "The championship was finished three or four weeks ago. Manchester United deserved to win it.

"I think it is important to win as many of our five remaining games, and win the FA Cup final."

As well as trailing Chelsea by a point, Tottenham are now just two points behind third-place Arsenal and have a game in hand on their north London rivals.

On Spurs' fightback, Bale said: "The gaffer [manager] told me to move out wide and it worked out well. Our opening goal gave us and the crowd belief.

"We showed our character. The club is moving forward every year. The players want to play in the Champions League, and we showed that today."

Tottenham recalled Bale after an ankle injury and the hosts started the game in positive fashion, but it was City who drew first blood.

Carlos Tevez's deft pass released James Milner and from the Englishman's cross, Nasri steered a volley past the lunge of defender Kyle Walker on the Spurs goal-line.

City goalkeeper Joe Hart had to spread himself to prevent Walker from equalising, but City continued to carry a threat in attack.

Nasri poked the ball wide after being freed by an adroit cushioned pass from Tevez, who then drew a reflex save from Spurs goalkeeper Hugo Lloris with a close-range header. Dempsey headed over for Spurs shortly before half-time, but the American was in the right place to tap home in the 75th minute after Bale threaded a glorious cross into the box with the outside of his left foot.

Defoe put Spurs ahead four minutes later, jinking inside Vincent Kompany and lashing a shot into the bottom-right corner, before Bale added a third with a cool, chipped finish in the 82nd minute.

At Anfield, interim Chelsea manager Rafael Benitez was granted a warm reception on his return to the club he led to glory in the 2005 Champions League. The Spaniard has failed to win over the fans of his current club, but he saw Chelsea take a 26th-minute lead when Oscar scored with a near-post header from a Juan Mata corner.

Liverpool introduced Daniel Sturridge at half-time and the former Chelsea player had an immediate impact, hitting the post from 20 yards and then netting an equaliser in the 52nd minute.

Suarez created the goal with a sumptuous cross but the Uruguayan gifted Chelsea an opportunity to restore their lead five minutes later by inexplicably handling a high ball inside the area.

Eden Hazard duly converted the ensuing penalty and Suarez sparked fresh acrimony when he appeared to sink his teeth into Ivanovic's upper arm during a penalty-box tussle. Referee Kevin Friend did not see the incident and Suarez finished the game by heading a dramatic equaliser past Cech in the seventh minute of stoppage time. – AFP