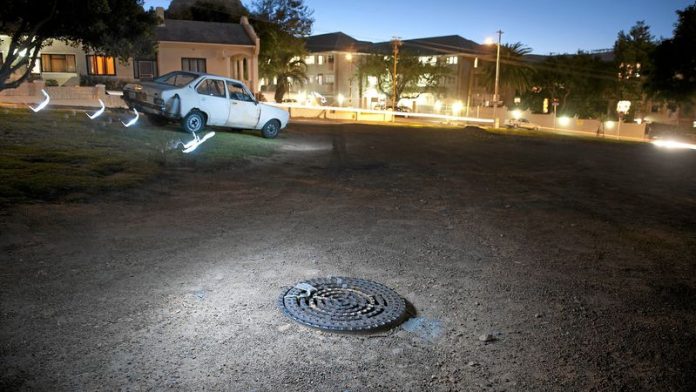 Going underground has particular connotations in a country like South Africa, with its history of subversive activity. Such associations are not entirely lost on the adventure tour arranged by Figure of 8 (FO8) that takes one into the labyrinth of the little-known tunnels that lie beneath the city of Cape Town.

Entry is slightly undignified:  through a cast-iron manhole and down a shaft, using the holes left by missing bricks as footholds. The temperature inside is temperate. A cap is a good idea for warding off the cobwebs on the roof of the tunnel. Excellent headlamps and gumboots are provided — don’t bring your own, FO8’s boots have excellent grip, which many garden-variety wellies do not.

The idea for the tour arose from research done by water campaigner Caron von Zeil. The tour is usually offered as a team-building exercise by FO8. They did it first in 2009. The minimum group is 10. The largest was 80, when the Cape Natural History Society did it. Andrew Boraine, the chief executive of the Cape Town Partnership, has been down and found it an eye-opening experience.

Although urban spelunking is not for the claustrophobic, the tunnels are far from unpleasant. For starters, there are no rats. There is ­reasonable ventilation and the tunnels don’t feel dank. You wouldn’t be able to explore without a flashlight, but numerous manholes give some natural light in places.

Water — about 12cm deep, though it can get higher — flows down the centre of the tunnel, making a rushing sound. For the most part, one walks wide with feet on either side of the stream for better grip.

The tunnel we enter channels the runoff from the Platteklip and Silverstroom gorges, tracing the course of what was once the Varsche River.

The first section, which runs under Upper Buitenkant Road, is made of cast concrete. It’s rather strenuous on the lower back, as someone of my height (1.85m) has to walk almost doubled over. You can briefly stretch up as you pass under the Rugley Road emergency exit.

After about 15 minutes, relief comes; amazingly, the tunnel is big enough to walk in fully upright.

From this point, it is made of red bricks. The workmanship is of a high quality and it has its own aesthetic attraction. Many of these bricks arrived in ships as ballast, so the slave trade left its mark underground in Cape Town, too.

Our group pauses under Mill Street at the Gardens Centre to look up through the manhole. One can just glimpse the Mill Street bridge.

The tunnel continues beneath Clare Street and Upper Canterbury Street, and another manhole in Roeland Street affords a view of the sky. The traffic noises, especially from heavy vehicles, are unnerving.

As one gets closer to the CBD, the cockroach nests multiply. The cockroaches (the big brown American variety) don’t bother one, and sit, hardly stirring, concentrated mostly around the entrances, a few metres to either side of the tunnel. I was surprised they lived in such exposed and (apart from their own waste) clean places.

Continuing on, you get the first ammoniacal whiff of drain, and the bricks become slipperier. There are occasional holes to watch out for, but nothing treacherous. The sound of trains rattle overhead.

The place of sweet waters
The tunnel now changes shape again, becoming oval. This is the oldest section of the tunnel and dates back to 1860. Here the construction includes black slate, echoing the walls of the Castle of Good Hope. The water erosion makes the stone more pearl-like in the centre channel, and white stalactites, probably from calcium, crystallise from the roof.

An hour and a half and two kilometres since we entered the tunnel, we exit via a manhole that pops up in the bank of the moat of the Castle at the Nassau bastion. We have explored one section of many kilometres of tunnel under the city.

But where, one wonders, does all the water go? It’s like a permanently burst municipal pipe.

The answer comes from social activist Von Zeil, founder and director of the Reclaim Camissa Project, named after “the place of sweet waters”, as the Table Valley was dubbed by the Khoi.

Some of Von Zeil’s revelations are shocking. Precipitation from the famous, almost daily appearance of the tablecloth over Table Mountain is sponged up by the fynbos, percolated through the mountain, and released in bountiful artesian springs. The amount of water is in the millions of litres a day. Some is piped, thanks to the 2010 Soccer World Cup, to irrigate the thirsty Green Point golf course, but nearly every other drop of this fresh water — on a conservative calculation, 40 litres a day for every man, woman and child in the city bowl — flows straight under the city and into the sea.

Bizarrely, this water, the very reason for the founding of Cape Town — now at the mercy of periodic water restrictions — was scrapped from the national asset register in 1994.

Von Zeil has proposed a number of projects for proper stewardship of the water. In the past 18 months she says she has experienced co-operation and recognition from the city authorities, but little has happened.

If Cape Town is going to get its act together to make better use of its vital water resources, perhaps more underground activity will be necessary — of the old-fashioned political kind.

Tours can be booked with Figure of 8. Visit www.fo8.co.za