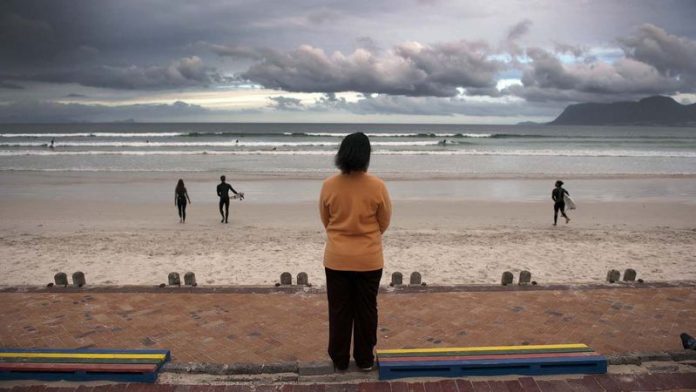 Virginie* was 19 when the killing started in Rwanda in 1994. She had left her boarding school in Butare to go home for the holidays. "For a short time, for three or four days, I didn't think I would be going cross border to cross border," she says of her forced journey that began after people started "disappearing" and ­bodies started piling up in the streets.

The journey lasted over two-and-a-half years and ended with Virginie living and working in Cape Town where she is raising her three children and completing an honours degree in social work.

Over a three-month period of displacement in Rwanda, Virginie says she was raped three times. Seeking refuge in the Gitarama football stadium with other members of her family, her brother "disappeared" with others, "because he looked like a Tutsi". Of mixed Hutu and Tutsi parentage, Virginie says her journey took her from Rwanda to Burundi, where she was forced into marriage, and then on to Tanzania and Mozambique over a two-and-a-half-year period, before she finally arrived in South Africa.

The cumulative effect of this experience, says Virginie, is that "you are almost a ghost. You are not dead, but you are a ghost among the living. All your values are taken away from you. I've always thought of myself as intelligent, strong. I am completing my degree now but … living under a plastic [in refugee camps], people kick you when they want, you are surrounded by a fence, you are a prisoner in a sense, but you are not legitimately in a prison."

For Rwandan refugees like her, personal histories mean that the realities and fantasies created to ­sustain them appear as an epidermis woven over their bodies: cells are made of displacement, murder, rape (sometimes more than once), death, crimes against humanity, crimes of war, and of peace – divided only by the lines of trauma sustained. Identities shift and change, sometimes to protect themselves from what they have experienced and, at other times, from what they have done.

The trauma is evidenced often during interviews with Rwandans – in haunted eyes, tears, anger, paranoia about how much personal information would be made public and exasperation that they are being "forced" back to Rwanda after the United Nations High Commissioner for Refugees announced that it was revoking the refugee status for Rwandans internationally and set a June 30 deadline for their return.

Further persecution
The Mail & Guardian understands that the Rwandan government hopes that the return of refugees who participated in the killings will lead to the final resolution of a genocide that has a death count estimated at 800 000 in 1994. Thousands more were killed in the years afterwards as displacement into neighbouring countries led to further conflict.

But wary refugees who spoke to the M&G suspect that the return is merely a cloak for further persecution of Hutus. Many expressed concern about the increasingly authoritarian bent of President Paul Kagame's government and his attempts to silence criticism from outside the country.

Jean-Paul*, a 54-year-old working as a teacher in Cape Town, said: "When I left Kigali, the rumours were spreading that the Rwandan Patriotic Front (RPF) was killing all the educated Hutus, so we fled. Now Kagame is afraid of the educated Hutus outside the country because we can think, we can be critical and not controlled and he is worried about his reputation internationally.

"If peace is to militarise the country, then there is peace in Rwanda. But there is no freedom. In Rwanda, if two Hutus are speaking you have to speak loudly so that people hear you and do not accuse you of conspiracy against the government," he adds.

In Rwanda, says Virginie, Kagame's government is intent, not on reconciliation, but on persecuting Hutus and creating a revisionist history that excludes Hutu deaths following the bloody massacres of 1994.

"In Rwanda, my story is not important, it must not be told or heard because it implicates both Hutus and Tutsis in murder … I don't care if you are Hutu or Tutsi, but I do care that people have killed and hurt each other on both sides … For me the hardest is never to get the closure. Death is part of our lives – you can't run away from it – but just see the types of deaths, it's just inhumane. We bury people, but bringing a machete to bury people in mass graves is another story," says Virginie.

What the Kagame regime seeks to do, they say, is to cover up the human rights violations and atrocities committed by his RPF in refugee camps in the Democratic Republic of Congo (DRC) following the 1994 killings and displacement of thousands of people.

A 2010 United Nations mapping report of the DRC that tracked events in the region from 1993 to 2003 noted that refugee camps for fleeing Hutus set up in the DRC close to its borders with Rwanda and Burundi were used by ex-Rwandan Armed Forces (FAR) and the Interahamwe militia as training camps and bases to launch raids into Rwanda.

Likewise, the report documents, Kagame's RPF, now in control of the national army, was also involved in raids and attacks on these camps. The mapping report details over 600 incidents of crimes against humanity or violations of international law.

It includes incidents such as  that of October 21 1996 when the RPF and its allied militia attacked the Lubarika camp "killing an unknown number of Rwandan and Burundian refugees" as well as Congolese civilians, and "forced local people to bury the bodies in four large mass graves. On the same day, soldiers also burned 30 refugees alive in a house in the village of Kakumbukumbu, 5km from Lubarika camp."

On the same day, an attack on the Luberizi refugee camp left 370 refugees dead, according to the report. "The soldiers threw the bodies of the victims into the latrines. They also killed several dozen people [refugees and Zairians] at the villages of Luberizi and Mutarule. After the killings, the bodies of over 60 victims were found in houses in the two villages," the report states.

Not a free country
Francois* fled to the Katare refugee camp in the DRC and says it came under attack by the RPF twice in November 1996.

"They bombed us the first time and we buried over 200 bodies. The second time we fled and ran into the forests of the Congo. I was separated from my family, others were led away by 'guides' but were killed …

"If I go back to Rwanda, I am afraid that what I witnessed and experienced of the RPF in the DRC and in the refugee camps may be held against me. I am afraid for my safety because of what I know."

There is deep concern among Rwan­dan refugees that the political situation in Rwanda is not conducive to their safe return and proposed new lives there.

Callixte Kuvaro, chairperson of the South African-based Rwanda Platform for Dialogue, Truth and Justice, says: "Rwanda is not a free country. If you are Hutu, you are persecuted. Political opposition is not allowed. Those that try to organise politically or are critical of the government are branded 'genocidaires' and are arrested and detained for long periods. Also, people disappear and are never found again."

Kuvaro and several others cite the examples of the government refusing to register other political parties, such as Frank Habineza's Democratic Green Party, before the 2010 elections. The body of Habineza's vice-president was found decapitated in the build-up to the polls.

Or the case of Victoire Ingabire, chairperson of the Unified Demo­cratic Front (UDF), who is currently appealing an eight-year sentence for inciting revolt and genocide ideology and forming an armed group. She was arrested before the 2010 presidential elections that the UDF was not allowed to contest.

Despite Rwanda being held up by the West, especially the former governments of Tony Blair in the United Kingdom and Bill Clinton in the United States, as a paragon of democracy, allegations that Kagame's regime is becoming more authoritarian mount – as do accusations that it is a military power- broker sowing instability in the region: a recent UN report fingered Kagame's regime for supporting the M23 rebels in the eastern DRC.

It is these sorts of conditions that make the idea of returning to Rwanda intolerable for people like Virginie, who has lived in South Africa for 16 years and has attempted to obtain permanent residence but has yet to "even receive a reply [from the department of home affairs] to say that they received my application".

"Believe me when I say this," she says, "home is home. I see people leaving Cape Town to go home for the holidays [to the rural areas] in December and it hurts me. There is nothing worse than not having a home, but the conditions at home at the moment … it must be a last resort if I have to return."