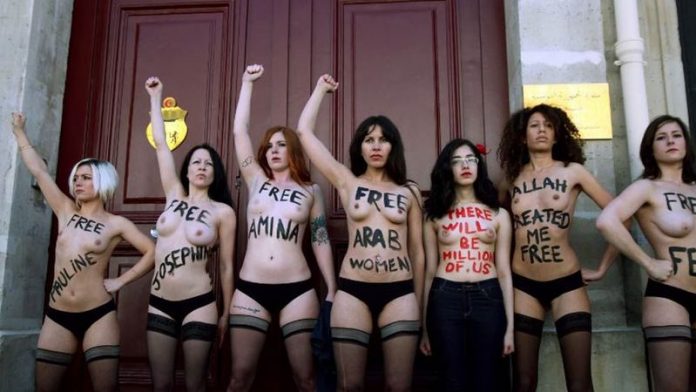 Pauline Hillier and Marguerite Stern from France, and Josephine Markmann from Germany arrived in court around 9.30 GMT on Wednesday wearing the traditional Tunisian headscarf, or safsari.

Judge Karim Chebbi called for a break in the hearing at the end of the morning, after lawyers representing Islamist groups angered by the topless protest asked to participate in the trial as civil parties.

"We are asking for a delay to examine the file and prepare our argument," said Anouar Ouled Ali, who has previously defended hardline Salafists prosecuted for acts of violence.

The defence called for the request to be dismissed, and demanded that the activists, who have been held in custody since last Wednesday, be released.

The judge is expected to decide in the afternoon and could call for a new adjournment.

Earlier in the day, a few dozen people gathered outside the courthouse and shouted abuse at one of the women's Tunisian lawyers.

"How can you defend those women?" one of the people shouted. "You are not Tunisian; you are not Muslim; you don't have a wife or daughter."

Debauchery charge
Patrick Klugman, who came to Tunis to represent the activists from the radical women's group Femen, said he was optimistic about the trial, calling it "a good sign" that he had been allowed to speak in court.

Klugman said the prosecution had decided on a charge of debauchery rather than an attack on public morals, adding that there were no material facts or evidence of intent to back up the charge.

"Their bodies were not exhibited to seduce but to convey a political message … which is different than debauchery," he told AFP.

But the women still face a possible six-month prison sentenced if convicted.

Klugman said he had come to defend "the freedom of expression of women, of the Femen activists and their message".

"We will ask that these Femen activists are listened to instead of looked at," he added.

Reflecting the sensitivity of the case in socially conservative Tunisia, which is ruled by a coalition government led by a moderate Islamist party and where hardline Salafists are increasingly assertive, a Ukrainian activist who had come to support the women was expelled on the eve of the trial.

The "sextremist" movement said the deportation, which authorities have not confirmed, was a worrying precedent.

"It's a signal that the court will not base its judgment on the law but that its decision will be political," Femen's leader in Paris, Inna Shevchenko, told AFP by telephone.

Femen in Paris
Several Femen activists stripped off and performed Muslim prayers outside the Tunisian embassy in the French capital.

The three women on trial in Tunis staged the group's first topless protest in the Arab world, outside the city's main courthouse on May 29.

They were demonstrating in support of Amina Sboui, a Tunisian activist arrested after painting the word "Femen" on a wall near a cemetery in the Muslim spiritual centre of Kairouan, in an act of protest against radical Islamists.

Sboui is also due to appear before an investigating judge on Wednesday at a closed hearing in the Kairouan court, which was under tight police surveillance, an AFP photographer reported. The Tunisian activist faces possible charges of indecency and desecrating a cemetery.

Ennahda, the moderate Islamist party that heads Tunisia's coalition government, has yet to comment on the Femen campaign even though it was the group's first target.

Since the 1950s, Tunisia has had the most liberal laws in the Arab world on women's rights, and the Islamists are often forced to defend themselves against the charge of wanting to roll back those rights.

The latest text of a draft constitution, released in April, states that "all male and female citizens have the same rights and duties" and "guarantees equal opportunity to men and women".

This formula, which was negotiated after Ennahda's failed attempt last year to introduce the concept of gender "complementarity," appears for now to have won a consensus. – AFP