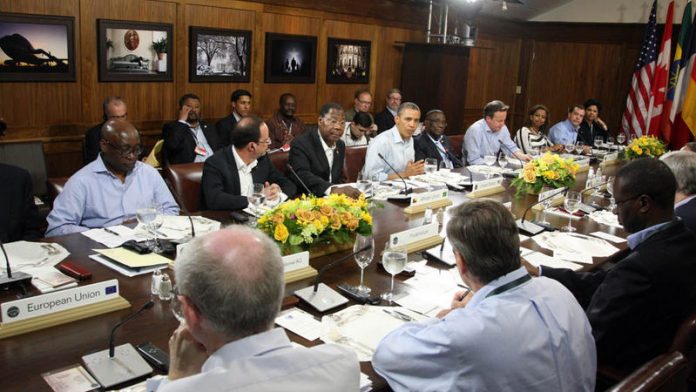 One of the stated purposes of the Conference of Berlin in 1884 was to save Africans from the slave trade. To discharge this grave responsibility, Europe's powers discovered, to their undoubted distress, that they would have to extend their control and ownership of large parts of Africa.

In doing so, they accidentally encountered the vast riches of that continent, which had not in any way figured in their calculations, and found themselves in astonished possession of land, gold, diamonds and ivory. They also discovered that they were able to enlist the labour of a large number of Africans, who, for humanitarian reasons, were best treated as slaves.

One of the stated purposes of the G8 conference, hosted by David Cameron next week, is to save the people of Africa from starvation. To discharge this grave responsibility, the global powers have discovered, to their undoubted distress, that their corporations must extend their control and ownership of large parts of Africa. As a result, they will find themselves in astonished possession of Africa's land, seed and markets.

David Cameron's purpose at the G8, as he put it last month, is to advance "the good of people around the world". Or, as Rudyard Kipling expressed it during the previous scramble for Africa: "To seek another's profit, / And work another's gain … / Fill full the mouth of Famine / And bid the sickness cease". Who could doubt that the best means of doing this is to cajole African countries into a new set of agreements that allow foreign companies to grab their land, patent their seeds and monopolise their food markets?

The New Alliance for Food Security and Nutrition, which bears only a passing relationship to the agreements arising from the Conference of Berlin, will, according to the US agency promoting it, "lift 50-million people out of poverty over the next 10 years through inclusive and sustained agricultural growth". This "inclusive and sustained agricultural growth" will no longer be in the hands of the people who are meant to be lifted out of poverty. How you can have one without the other is a mystery that has yet to be decoded. But I'm sure the alliance's corporate partners – Monsanto, Cargill, Dupont, Syngenta, Nestlé, Unilever, Itochu, Yara International and others – could produce some interesting explanations.

The alliance offers African countries public and private money (the UK has pledged £395-million of foreign aid) if they strike agreements with G8 countries and the private sector (in many cases multinational companies). Six countries have signed up so far.

Land, seed grabbing
That African farming needs investment and support is indisputable. But does it need land grabbing? Yes, according to the deals these countries have signed. Mozambique, where local farmers have already been evicted from large tracts of land, is now obliged to write new laws promoting what its agreement calls "partnerships" of this kind. Côte d'Ivoire must "facilitate access to land for smallholder farmers and private enterprises" – in practice evicting smallholder farmers for the benefit of private enterprises. Already French, Algerian, Swiss and Singaporean companies have lined up deals across 600 000 hectares or more of this country's prime arable land. These deals, according to the development group Grain, "will displace tens of thousands of peasant rice farmers and destroy the livelihoods of thousands of small traders". Ethiopia, where land grabbing has been accompanied by appalling human rights abuses, must assist "agriculture investors [domestic and foreign; small, medium and larger enterprises] to … secure access to land".

And how about seed grabbing? Yes, that too is essential to the wellbeing of Africa's people. Mozambique is now obliged to "systematically cease distribution of free and unimproved seeds", while drawing up new laws granting intellectual property rights in seeds that will "promote private sector investment". Similar regulations must also be approved in Ghana, Tanzania and Côte d'Ivoire.

The countries that have joined the New Alliance will have to remove any market barriers that favour their own farmers. Where farmers comprise between 50% and 90% of the population, and where their livelihoods are dependent on the non-cash economy, these policies – which make perfect sense in the air-conditioned lecture rooms of the Chicago Business School – can be lethal.

Strangely missing from New Alliance agreements is any commitment on the part of G8 nations to change their own domestic policies. These could have included farm subsidies in Europe and the US, which undermine the markets for African produce; or biofuel quotas, which promote world hunger by turning food into fuel. Any constraints on the behaviour of corporate investors in Africa (such as the Committee on World Food Security's guidelines on land tenure) remain voluntary, while the constraints on host nations become compulsory. As in 1884, powerful nations make the rules and weak ones abide by them: for their own good, of course.

The west, as usual, is able to find leaders in Africa who have more in common with the global elite than with their own people. In some of the countries that have joined the New Alliance, there were wide-ranging consultations on land and farming, whose results have been now ignored in the agreements with the G8. The deals between African governments and private companies were facilitated by the World Economic Forum, and took place behind closed doors.

But that's what you have to do when you're dealing with "new-caught, sullen peoples, / Half devil and half child", who perversely try to hang on to their own land, their own seeds and their own markets. Even though David Cameron, Barack Obama and the other G8 leaders know it isn't good for them. – Guardian News and Media 2013

A fully referenced version of this article can be found here.