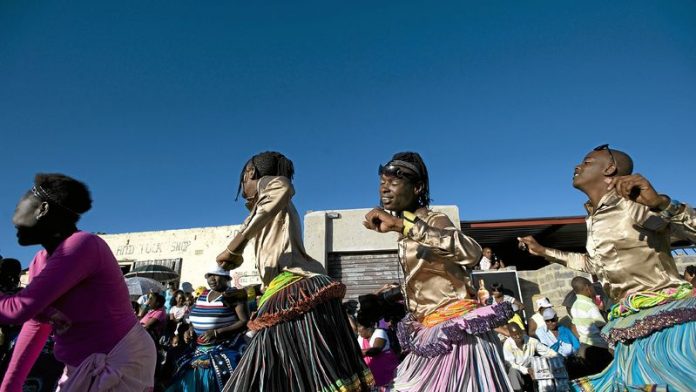 Not one to jump into the limelight, German-born electronic music producer Mark Ernestus prefers the shadows.

In 2010 he told The Wire magazine that he would rather be “invisible”.

Speaking about the anonymity that defined his early 1990s production team, Ernestus told The Wire: “I realise that I really love the idea to have my genetic code in the genetic code of the music.”

In 1993, Ernestus rose to fame after he teamed up with electronic music pioneer Moritz Von Oswald to form the production team and record label Basic Channel.

Originally releasing a number of vinyl-only tracks in the minimal techno genre under various aliases, the duo set up in a studio in the suburb of Kreuzberg in Berlin, in a building that would go on to house Ernestus’s distributing company and shop Hard Wax.

Basic Channel also showed a strong affinity for Jamaican music and, with the Rhythm & Sound imprint, the duo released records with a sound that moved towards dub.

Speaking to The Wire about dub music, Ernestus said: “You know your audience, you’re on a level with the audience and that I would see as the same in serious club music. My main focus is on the production, the rhythm, the groove, the overall sound.”

Of late, Ernestus has turned his focus away from dub and more towards African music. He says that he started listening to African music more intently “in the last five years or so”.

“I would say that a lot of Senegalese music got me interested deeper than any other music in recent years,” he says.

Ernestus would eventually collaborate with a number of Senegalese mbalax musicians for his albums 800% Ndagga and Ndagga Versions.

Remixing and remastering
In November 2010, Crammed Discs put out a compilation titled Tradi-Mods vs Rockers, which saw a host of bands and producers using the music of Konono No 1, Kasai Allstars and other Congolese bands released under the Congotronics brand to create new music.

Some were remixes, others edits, others entirely new ­creations. Ernestus contributed two tracks to the 28-track, double disc collection, both reworkings of Konono No 1’s Masikulu.

The original track is an eight-minute banger, with its blend of likembe rhythms, sped up percussion, deep bass and call and response vocals. It’s like a Congolese trance party, but distorted to within an inch of its life through the DIY amplification model used by Konono No 1.

“Marc Hollander from Crammed Discs asked me and I was thrilled since I was a fan and I had a rough idea right away of how to approach it,” says Ernestus. “It turned out there was hardly any channel separation due to the recording situation, so I had to do quite extreme treatments in order to isolate and bring out the elements I wanted to feature.

“Despite that, I feel it is quite close to the original, whereas in theory it’s not,” he says.

The first mix of Masikulu was titled Masikulu Dub and offered up a soundsystem banger, which took the breakneck speed of the original and warped it into a more stagnant, dread-filled piece of electronic music.

The second mix, Masikulu Rhythm, takes a more dancefloor-centric approach, stripping the song back to a metronomic beat, with hand percussion providing the variation within the rhythm.

It was clear that Ernestus was bringing the techniques of his minimalist techno production to bear on the rhythms of Konono No 1 and the results were fantastic.

Then, in 2010, Ernestus became involved in another project.

Freshness, energy and good humour
Honest Jon’s had been approached to put out a compilation album called Shangaan Electro, which featured the work of a Shangaan production house in Soweto, Nozinja Productions.

Mark Ainley of Honest Jon’s roped in Ernestus to help with the compilation and Ernestus said he was eager.

“Our approach was not to try and represent the whole spectrum as in ‘here is an overview of this music’, but rather making the selection in order to shape a specific image within the spectrum from the stuff that we were most excited to feature,” says Ernestus.

“I love the wild freshness, energy and good humour of Shangaan music,” says Ainley. “I love that there is no bass … the first commandment of club music, straight out the ­window.”

“When I first listened, I thought of juke music in Chicago straight away,” says Ainley. “UK dubstep at the time was getting sick and tired of itself: Ramadanman had moved things on with glut, a juke-garage hybrid, and I could see how Shangaan would be a shot in the arm.

“I relished how Shangaan music would be immediately embraced by these scenes but met with utter, pious incomprehension by the ‘world music’ establishment,” he says. “It was really exciting, putting out Shangaan Electro.”

Then, in August 2011, Honest Jon’s began to release limited edition 12-inch remixes and edits of some of the tracks from their compilation Shangaan Electro, which had been released in June 2010.

The first 12-inch had two remixes by Ernestus of the BBC song Ngunyuta Dance.

Asked how one goes about engaging with, editing or remixing something like Shangaan Electro, Ernestus says there is no standard procedure.

“The procedure is determined by the material and things that come up spontaneously, but I hardly ever work sample-based,” he says.

“In this case, there were no parts available, so what I did first was to ‘reverse engineer’ the track with different sounds. I re-programmed all the lines as I heard them, but then felt completely free to destroy them again and go anywhere from there — change, add and delete stuff and obviously change the tempo. So, in this case, I happened to end up, I think, quite far from the original.”

Dubby minimalism
Far from the original indeed, BBC’s Ngunyuta Dance is a flourish of breakneck beats, colourful synths and call-and-response vocals delivered at incredible speed. Imagine the soundtrack to a Shangaan version of Super Mario Brothers on speed and you will be getting close.

Ernestus’s remix, on the other hand, which is dubbed Mark Ernestus Meets BBC, is a dubby minimalist piece, with waves of ambient synth in the background. If it wasn’t for the recognisable vocal samples you’d be forgiven for thinking you were listening to a completely new song.

Mark Ernestus Meets BBC Version was an alternative dub of the same track and both remixes clocked in at over nine minutes.

The full collection of remixes was eventually released by Honest Jon’s as the double disc compilation Shangaan Shake in February 2012.

But, in September 2011, just month after Ernestus’s Shangaan remixes hit the shelves, he was back at the remix desk. This time he was included in an Honest Jon’s compilation called Lagos Shake: A Tony Allen Chop Up, which saw him reworking the Allen song Moyege into what he dubbed Mark’s Disco Dub.

This time it was Allen’s turn to have his Afrobeat warped into another minimalist techno-funk rhythm, which rates as Ernestus’s finest recent work.

When asked about the growing trend of Western electronic producers working with African musicians and remixing African music, Ernestus is nonplussed.

“I have no general comment about it,”  he says. “But I guess it’s about time.”