UN peacekeepers to take over from African soldiers in Mali 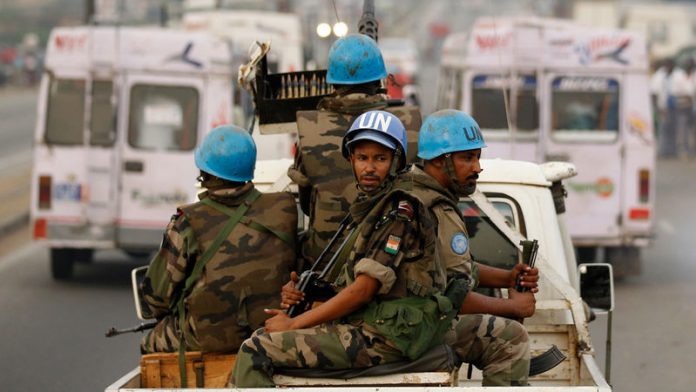 The United Nations soldiers will take over from African troops in conflict-scarred Mali from Monday.

"Security conditions are satisfactory, no major attack has been recorded against the Malian and African forces, and most important, despite what certain people feared, the political process has experienced a very positive evolution," France's UN ambassador Gerard Araud said, welcoming the handover.

A 12 600-strong force will take over security duties from French troops who entered Mali in January to halt an Islamist advance and help the government re-establish its authority over the vast country.

France is winding down its deployment from its peak of nearly 4 500 but is to keep up to 1 000 troops in Mali and they will maintain responsibility for military strikes against the Islamists.

The majority of his soldiers will be Africans already stationed in Mali but China has offered to supply more than 500 troops in what would be its biggest contribution to UN peacekeeping.

Sweden will send around 70 troops for a maximum of one year while Norway is to contribute 25 soldiers and police.

Bangladesh is thought to have offered the largest non-African contingent of up to 1 000 troops although no deal has yet been confirmed.

Guerrilla attacks
Araud said the French government would start reducing the 3 200 troops currently in Mali from the end of August.

UN leader Ban Ki-moon has raised fears that the peacekeepers could face guerrilla attacks and has highlighted the lack of equipment and training among the West African troops already in Mali.

Armed militias "retain the capability to pose a significant threat" and "still have support networks and recruitment structures in place", Ban said in a report published on June 9.

The UN mission is due to play a key role in presidential polls announced for July 28 but the election commission has raised doubts over its ability to stage a free and fair vote with such short notice.

The commission's president Mamadou Diamountani said this week it would be "extremely difficult" to get up to eight-million voting cards to the electorate in a country where 500 000 people have been displaced by conflict.

He also highlighted the instability in the north-eastern town of Kidal, which is occupied by Tuareg separatists and still has no army presence despite a ceasefire between the transitional government and the rebels.

Malian military officers staged a coup in March last year, but the weak army was overpowered by the National Movement for the Liberation of Azawad (MNLA), a Tuareg front, which seized key northern cities before being sidelined by its al-Qaeda-linked allies.

The MNLA sided with a French-led military intervention, which reclaimed most of the lost territory from the Islamists. But the Tuaregs have been reluctant to allow government troops into Kidal for the vote.

An accord signed in Burkina Faso envisages a cessation of hostilities between the Malian army and the MNLA during the election period, with peace talks planned for after the vote.

A UN Security Council briefing heard this week that the mission – to be known as Minusma – is seeking pledges for helicopters, intelligence and special forces.

"We count on the continued support of both our traditional and new troop-contributing countries to help us fill these critical shortfalls," said under-secretary-general for Peacekeeping Herve Ladsous.

Beyond the threat of armed insurgents, the "blue helmets" will also find the challenge of the harsh terrain in arid northern Mali, where the temperature regularly reaches 48C and where water is scarce.

"All information and communications technology, vehicles, refrigeration and tentage that is ultimately used in Mali will be exposed to climatic conditions that accelerate their decay," under-secretary-general for Field Support Ameerah Haq told the council.

"We already know that certain technological options are out of the question. For example, we are unable to deploy our mobile communications system to Kidal because its sensitive components will melt."

'Beat the odds'
Haq acknowledged the many risks faced by the force in "one of the most logistically challenging missions the United Nations has ever launched" but said planning was on track.

"In Mali, neither the challenges nor the risks at hand should be underestimated. Much is beyond our control," she said.

"But our efforts to date, and the results achieved by Minusma thus far suggest that, with commitment, vision and the continued support of member states, we just may be able to beat the odds." – AFP