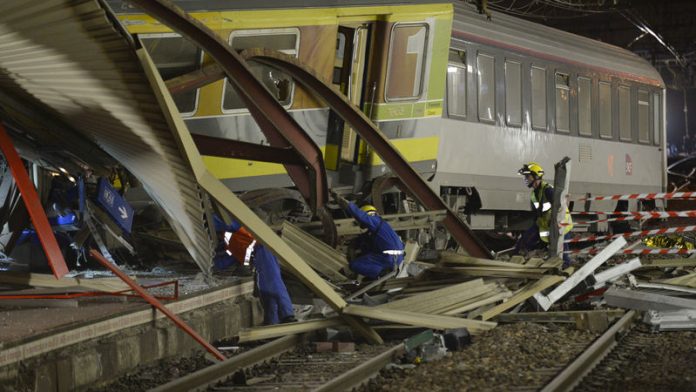 The French transport minister has warned that more victims could yet be found.

Praising the quick reflexes of the driver, who sent up the alert that halted all train traffic in the area, Transport Minister Frederic Cuvillier virtually ruled out human error in the disaster, saying the probe would focus instead on the "rolling stock, infrastructure and the precise signalling area".

"Fortunately the locomotive driver had absolutely extraordinary reflexes by sending the alert immediately, which avoided a collision with a train that was coming the other way and just a few seconds later would have smashed into the cars that were derailing. So it's not a human problem," Cuvillier told French radio Saturday.

In France's worst rail disaster in 25 years, the train derailed and crashed into a station platform on Friday afternoon, killing six and leaving 30 injured, eight seriously.

Rescue teams worked through the night checking the wreckage of overturned carriages to see if any passengers remained trapped inside.

Cuvillier said earlier Saturday that further "unfortunate discoveries" could not be ruled out.

Overturned carriage
He also told French television that work to right the overturned train cars could take a "very long time (because) the carriages are very intertwined."

The bodies of five of the six dead have been extracted from the wreckage, said a source close the operation.

Witnesses said the crash site resembled a war zone, with one survivor describing having to walk over a decapitated body to escape an overturned carriage.

The regional train was heading from Paris to the west-central city of Limoges. It derailed as it passed through the station at Bretigny-sur-Orge, about 25 kilometres (15 miles) south of Paris.

Four carriages of the train jumped the tracks, of which three overturned. One carriage smashed across a platform and came to rest on a parallel track; another lay half-way across the platform.

Passenger Marc Cheutin, 57, told AFP he had to "step over a decapitated person" after the accident, to exit the carriage he had been travelling in.

'A war zone'
A witness who had been waiting for a train at the station, Vianey Kalisa, said: "I saw a lot of wounded people, women and children trapped inside (the carriages).

"I was shaking like a child. People were screaming. One man's face was covered in blood. It was a like a war zone."

Guillaume Pepy, head of France's SNCF rail service, told reporters that SNCF, judicial authorities and France's BEA safety agency would each investigate the cause of the derailment.

A railway passenger association denounced what it called "rust-bucket trains" and the practice of coupling different types of trains together, demanding proper inspections.

Visiting the scene on Friday evening, President Francois Hollande said: "We should avoid unnecessary speculation. What happened will eventually be known and the proper conclusions will be drawn."

Officials said the derailment happened at 5:14 pm , minutes after the intercity train left the Paris-Austerlitz station.

"The train arrived at the station at high speed. It split in two for an unknown reason. Part of the train continued to roll while the other was left on its side on the platform," a police source told AFP.

Condolences
Cuvillier, who also visited the crash site, said the train had been travelling at 137 kilometres an hour (85 miles per hour) at the time of the crash.

That was below the 150 kph limit for that part of the track.

Some 300 firefighters, 20 paramedic teams and eight helicopters were deployed to treat casualties at the scene and airlift the most seriously injured to nearby hospitals.

In total, 192 people were treated by emergency services, officials said. There were 385 passengers on the train, which means it was not overcrowded.

The accident occurred as many in France were leaving for the start of their summer holidays ahead of Bastille Day on Sunday.

Signs on the town's municipal notice board announced that fireworks planned for Saturday evening had been cancelled.

In Brussels, EU Commission chief Jose Manuel Barroso expressed his condolences in a message to Hollande.

British Foreign Secretary William Hague expressed his shock at the crash in a statement Friday.

At least four people have died and 63 injured when a train derailed in New York, says an official.
Read more
World

A Spanish train was hurtling around a curve at 179kph, more than twice the speed limit, when it leapt off the tracks in a fatal disaster.
Read more
World

The driver of a train wreck in Spain was responding to a phone call from the rail company when the crash took place, according to a court report.
Read more
National

Train services stalled due to crash in Pretoria

Train services have been interrupted as a result of an accident between two commuter trains that collided near Pretoria.
Read more
National

At least 19 people have been killed and 24 others were injured when a truck collided with a train at a level crossing in Malelane, Mpumalanga.
Read more
Advertising
Continue to the category
Politics