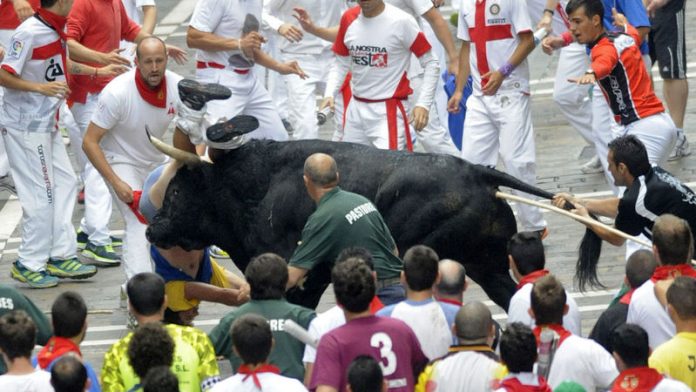 The bulls had chased people through the Pamplona streets on Saturday.

The bull run at San Fermin – made famous by Ernest Hemingway in his novel The Sun Also Rises – is one of hundreds in Spain every year and attracts large numbers of foreign visitors.

Local authorities said a 19-year-old Spaniard was being treated in hospital and was in a "very serious" condition. A runner from Ireland had suffered chest trauma although his injuries were not thought to be as serious, they said.

At least 23 people were being treated in hospital, medical officials said. One man had been gored in the armpit and another in the buttocks, they said.

Three men were gored during Friday's run, including an American tourist who had to have his spleen removed.

Thirteenth-century-old festival
The Pamplona run takes place at 8am every morning for one week in July. Saturday's run lasted four minutes and 15 seconds. Sunday is the last day.

Goring happens from time to time but stampedes are rare and only 14 have died in the last 100 years in the San Fermin run – a festival that that dates from the 13th century.

Runners dress all in white with red neckerchiefs and many spectators stay up drinking all night in bars beforehand.

The bulls are usually killed by bullfighters in the ring. – Reuters