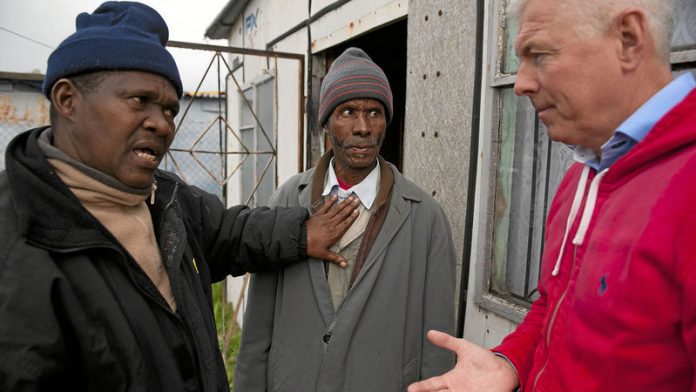 Irish lawyer Dave Coleman watched the massacre of 34 striking Marikana miners on television in August last year and was filled with horror. Another 78 miners were injured in the police shooting and the devastating scenes left a lasting impression on the man who specialises in multiparty litigation.

What equally shocked him were the symptoms of the volatile miner's strikes.

"I started looking into the legal rights of the miners and I found that the laws were some of the most pro-labour laws in the world, and almost certainly the weakest delivery of rights under those laws," Coleman told the Mail & Guardian last weekend, shortly after addressing a crowd of former miners and deceased miner's dependents in Makhaza informal settlement in Khayelitsha outside Cape Town.

For the past few months, Coleman has been working with Barnabas Xulu of Cape Town-based Xulu Liversage attorneys to identify miners who are either injured, suffering from lung disease or were not awarded statutory benefits by the Unemployment Insurance Fund and provident funds.

Miners taking part in the litigation are being tested for mining-related illnesses and the news was not good last week when a doctor delivered test results in Makhaza. About 40 of the 44 former miners who had been tested were informed they had diseases such as silicosis, tuberculosis and other asbestos-related illnesses.

"Our work has been community driven as the chiefs in the rural areas are referring people to us," said Xulu. "In urban areas and townships, it is the local councillors who refer these clients to us. We have also involved organisations of ex-miners, like the one in Makhaza …

"In the circumstances, we as a legal team representing the miners will be happy to engage with the mine industry to find a solution and to come up with a comprehensive compensation scheme."

The lawyers said they had signed memorandums of understanding with 15 000 miners.

"We believe it to be the single biggest cause of action for industrial disease and injury in modern times," said Coleman.

"In fairness to the mines, they can only deal with what is in front of them, and we are now in front of them. We recognise the infrastructural and logistical difficulties in bringing about a solution but jaw-jaw is better than war-war, to quote Winston [Churchill]."

With the dry wit expected of the Irish, he quipped: "Though it is difficult for an Irishman to quote an Englishman."

The M&G spoke to several former migrant miners in Makhaza, who claimed to be destitute. Their common complaints were of low wages, harsh conditions, lung illnesses, injuries and a lack of benefits.

Among the crowd was 67-year-old Mshiyeni Mdaka, who wore a pair of white mining gumboots and walked with a shuffle. His damaged eyes stared past me as he spoke.

"He's partially blind. He was injured at work when he drilled into the walls of the mines and stones would hit his eyes," a friend said.

Mdaka said he had worked for 18 years at a gold mine in the Free State and had received no statutory benefits when he was forced to quit his underground job as a machinist owing to back and eye injuries.

Like Mdaka, many former miners came on foot from different parts of Khayelitsha to meet the lawyers after being alerted by SMS.

A senior partner of Lavelle Cole­man in Dublin, Coleman has recently been involved in several successful cases, including court action against ACC Bank in Ireland. In November last year, the bank settled 500 cases, following a test case taken by some investors who lost money on so-called "low-risk bonds". The Irish Examiner newspaper described it as a "watershed case" for large actions in Ireland.

Xulu said class actions were recognised in this country by the Constitution to redress the imbalances of apartheid that had affected large numbers of people. But they had chosen to go for multiparty litigation, which required each miner's case to be heard individually.

"The Constitution does not lay out the procedures of how these class actions are dealt with and the courts have now laid the guidelines," said Xulu. "However, these guidelines have the potential of evolving and changing, and the best way to deal with this is to issue claims individually as part of a multiparty lawsuit. We are therefore not running the danger of the miners not getting satisfaction as a class action."