Where the heart is: South Africa’s post-apartheid housing failure 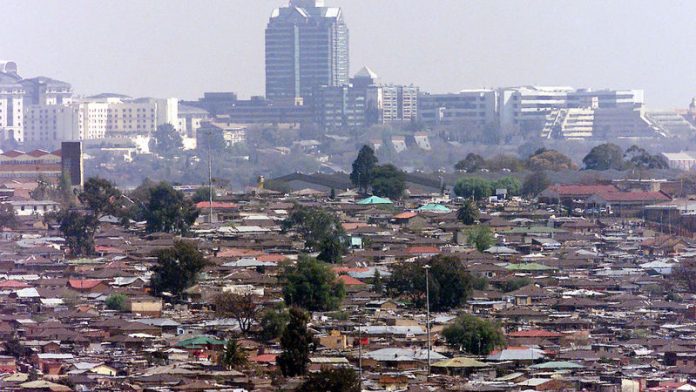 Cecily Ghall speaks with pride about the neat, whitewashed two-room shack she built in an acquaintance’s backyard using scrap wooden planks and asbestos plates. It’s warm and – important in the midst of a wet winter – dry, she says. But it isn’t hers.

Ghall (47) has waited for a government-provided home since 2008, when she and her daughter Deonie, then 13, moved to Kurland Village, a predominantly coloured settlement of about 2 000 residents. Less than 16 kilometres away is Plettenberg Bay, a seaside resort where homes selling for more than R15-million are common.

“I don’t know how they decide who gets a house,” said Ghall, who works part-time as a domestic servant. “I’ve been on the waiting list all this time, but I never hear anything. In the meantime, I have to live in someone’s backyard and I can get kicked out at any time.”

Substandard housing remains a legacy of apartheid almost two decades after former President Nelson Mandela’s African National Congress came to power in the nation’s first multiracial vote. Since then, 3.3-million low-cost homes have been built, yet informal settlements have mushroomed around cities as the state programme failed to keep pace with population growth. The housing backlog of about 1.5-million in 1994 has burgeoned to 2.1-million as the population has grown by 13-million to 53-million, according to government data.

Feeling the pinch
It’s not only the poor who are feeling the pinch. Only 15% of South Africa’s 14.45-million households earn enough to secure a mortgage, while 60% earn less than R3 500 a month and can qualify for state housing, government data shows. The remaining 25%, including most teachers, nurses, police officers and soldiers, have had access to neither.

Jody Lee, who lives in an outbuilding formerly used as servants’ quarters on his parents’ property in the lower middle- class Cape Town suburb of Blackheath, is caught in a bind common among new entrants to South Africa’s middle class: they earn too much to qualify for free government housing yet not enough to buy their own.

After six years of teaching high-school economics and business studies, Lee (27) takes home about R13 000 a month after taxes and other deductions, which qualifies him for a mortgage of about R400 000. That’s just over half the average price of a small home, according to Absa Group, the country’s biggest home-loan provider.

“It’s the middle-income group that’s struggling the most because we don’t get free services,” Lee said in a July 23 phone interview. “You have to pay for everything.”

The government says it has little scope to increase funding for housing, with Finance Minister Pravin Gordhan forecasting the economy will expand by no more than 2.2% this year. Red tape, corruption and poor communication have bedeviled the efforts so far.

“People are not aware of the rules of the game, and there are so many processes during which problems and tensions can arise,” said Kate Tissington, a senior researcher at the Socio-Economic Rights Institute of South Africa (Seri), a nongovernment advocacy group. “There is very little monitoring and oversight of the process, and corruption around allocation is often reported.”

Former Human Settlements Minister Tokyo Sexwale, an erstwhile liberation fighter who shared prison time with Mandela on Robben Island before becoming one of the country’s richest businessmen, was fired from the Cabinet on July 10 after losing his bid for the deputy presidency of the ANC to Cyril Ramaphosa — President Jacob Zuma’s favored candidate – in December.

The housing portfolio passed to Connie September, a lawmaker and former deputy president of the Congress of South African Trade Unions, the country’s largest labor group.

Policy shift
September will oversee a shift in housing policy, initiated by President Jacob Zuma, to upgrade shacks and provide services to informal settlements rather than building more free housing for the poor, said Marie Huchzermeyer, a professor of urban planning at the University of the Witwatersrand in Johannesburg.

Helping middle-income earners – known as the gap-housing market – gain access to mortgage financing – is also a priority, she said.

“Sexwale tended to champion gap housing and the involvement of the private sector,” Huchzermeyer said by phone on July 29. “He never really strongly championed informal settlement upgrading.” While September has no background in housing, she “doesn’t have to be a specialist, but she must be a good politician who listens to specialists".

Zuma’s target is to upgrade 400 000 informal shacks, while maintaining waiting lists for free housing “which comes right at the end of the process,” Hunchzermeyer said. The new policy amounts to an acknowledgment that the government can’t meet the demand for free housing, she said.

To encourage lending, the government in January introduced subsidies on down payments for first-time buyers of properties costing R350 000 or less, reducing the potential size of the loan and the risk of default.

“Quite clearly, the continuous allocation of grants for free housing to the poorest of the poor is unsustainable going forward,” Sexwale said in his last speech to lawmakers in May. The subsidy will empower more people to “become real estate owners, to become real participants in the capital markets.”

Neither Sexwale nor September responded to emailed requests for interviews.

Mortgage Profitability
Households must earn between R3 501 and R15 000 to qualify for a cash deposit from the government, ranging from R10 050 to R87 000. The more they earn, the lower the subsidy. The grants are only available for homes in developments approved by the National Housing Finance Corp, a unit of the department of human settlements.

“The profitability in the mortgage market is just not enough to compensate banks for the risks of lending,” Johann Scholtz, an analyst at Afrifocus Securities in Cape Town, said by phone. “Banks are deploying capital in other asset classes, such as unsecured lending” and the subsidy “may be just what is needed” to re-channel money toward mortgages, he said.

Residential mortgage lending in South Africa grew 1.2% in the year through April, compared with 11.5% growth in total loans and advances by banks, central bank data shows. The pace of mortgage growth was as high as 9.9% in 2009 as the central bank cut its benchmark interest rate to a three-decade low of 5.5% and kept it there for a record 18 months.

First National Bank aims to double its affordable housing business in the next five years, and the subsidy will play a role, according to Marius Marais, the lender’s head of housing finance.

“There are about 1-million households who shouldn’t be living in backyard shacks” because they qualify for financing, he said in a telephone interview on July 5. “We see that as quite a lucrative market.”

Affordable Housing
First National holds about R12-billion of affordable-housing loans, about 7% of its total loan book. The company has financed 100 000 homes in that market segment since 2002. Among the developments it is funding are two projects in Cape Town and one in Port Elizabeth that qualify for the state subsidies and are targeted at households earning R8 000 rand to R10 000.

“Those are the people that just don’t make the normal affordability cut” and benefit most from the state incentives, Marais said. Expanding the program requires more “developers to create stock that we can finance.”

Calgro M3 Holdings is one of those. Created in 2007 to build low-income housing, the Sandton-based company reported a 55% rise in full-year revenue in May as it built large-scale housing developments in partnership with the government and lenders. The share price has climbed 48% in the past year.

The number of shack dwellers able to finance their own homes is limited, with a quarter of the workforce unemployed and many households surviving on a single salary or welfare grants. Affordable housing accounts for about 5% of the nation’s R838-billion mortgage market, central bank data shows.

Low-income communities are running out of patience. Last year, there were a record 173 protests over a lack of proper shelter and basic services, according to Johannesburg-based research group Municipal IQ.

Ghall, the domestic worker living in the shack she built herself, earns about R800 in a good month. For her, a mortgage isn’t an option and free housing is little more than a dream.

“They say it’s for people who earn less than R3 500 rand a month, and that’s me,” she said. “Some people are getting houses but not me. My child has moved out already and I’m still waiting.”

While private-sector involvement is helping, especially in the gap-housing market, the onus is on the government for providing housing for the poor, Seri’s Tissington said.

“It needs to take the lead and drive the private sector in the right certain direction, coming up with a very clear agenda on ensuring adequate housing for all in South Africa,” she said. – Bloomberg