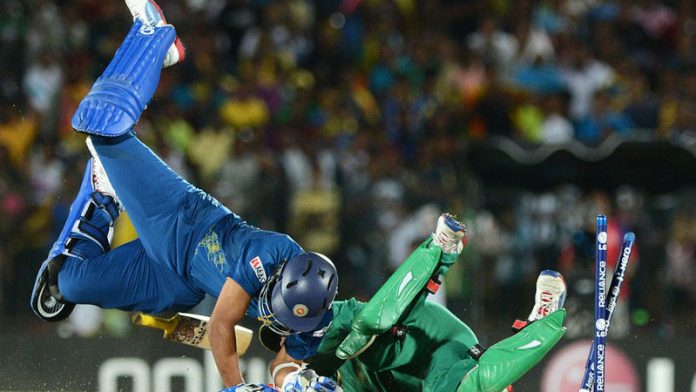 In the three months I have been in South Africa, most of the people I've met – the students and professors in the university I'm based at, taxi drivers, people in pubs, passengers in buses and church workers – have heard only one thing about Sri Lanka: cricket. Not about the war, tourist attractions or "Ceylon tea".

Yet, with South Africa's recent tour of Sri Lanka, more South Africans are talking about Sri Lanka and cricket. Several have told me the international cricket (and other sports) boycotts contributed to the anti-apartheid struggle and South Africa's transition to democracy.

Yet more civilians, journalists, human-rights activists and priests have disappeared or been killed, arbitrarily detained and/or tortured at the hands of the Sri Lankan government than by the apartheid regime in South Africa.

To be fair, the ANC and other anti-apartheid groups that took up arms did not resort to some of the brutal tactics used by Sri Lanka's major Tamil militant group, the Liberation Tigers of Tamil Eelam, such as suicide bombings, killing hundreds of civilians in public places, forcibly recruiting child soldiers, ethnic cleansing, killing Tamil dissidents and using hundreds of thousands of Tamil civilians as hostages during the last months of the war.

Despite the differences in the root causes of the political conflicts, ­however, as well as the differences in the forms of oppression and the local and international context, a striking commonality exists between apartheid South Africa and Sri Lanka today. A particular community was and is still being discriminated against in Sri Lanka. Dissent was crushed violently in apartheid South Africa, as it is today in Sri Lanka.

Should there be a boycott of Sri Lankan cricket? The international boycott worked during apartheid in South Africa but is not appropriate for Sri Lanka today.

In apartheid South Africa, cricket was a game only for whites, but in Sri Lanka, it is a game for everyone and is played and enjoyed by all communities, including Sinhalese and Tamils. At a time when the Sri Lankan government is trying to isolate Sri Lankans – particularly minorities and dissidents – from the rest of the world, a cricket boycott would play into that repressive agenda. Denial of access to a sport that is almost sacred would look, to the vast majority of Sri Lankans, like an international conspiracy.

They would hope that South African cricketers would be more creative, courageous and ­principled when playing in countries with oppressive regimes such as Sri Lanka.

They point, interestingly, to the deceptions of the apartheid regime: the tokenistic inclusion of some black cricketers or playing visiting rebel teams in the 1980s. In today's Sri Lanka, such tokenism is commonplace. The president's son (a member of Parliament) plays cricket with Tamils in the north, while denying the past and ignoring ongoing atrocities against Tamils. Teams from southern Sri Lanka play teams in the north, run coaching camps, and donate equipment, while keeping silent about those who have been killed, about the land occupations and the continuing suffering Tamil Sri Lankans endure.

It should not be too difficult for the South African cricket team to practice real, substantial and symbolic acts of solidarity, such as making a public stand in support of Sri Lankan lawyers, journalists, academics and artists and their organisations that are continuously under attack. They could make statements supporting the struggle of the families of disappeared persons to find out the truth of these political abductions and in support of those whose land has been occupied by the military.

South African cricketers could extend understanding and solidarity to such Sri Lankans either privately or publicly. They could donate from their match fees or their "man of the match" awards to these struggles for justice. Cricketers have huge media popularity and some small part of this could be put at the service of victims of human-rights violations and their families in Sri Lanka. The team could wear black armbands to protest against violations and could explain their action to the media.

If they claim to have no know-ledge of the situation of Sri Lankan minorities, they could listen to what Desmond Tutu and fellow truth and reconciliation commissioner Yasmin Sooka have said about Sri Lanka. They could ask their own government about the role of South African diplomats in low-key negotiations between the Sri Lankan government and Tamil political parties.

If they want to get to know matters firsthand, they could go to play a Twenty20 match in Jaffna or Killinochi and spend a few hours talking to the families of those killed or disappeared, to those who have been tortured or to those whose lands have been occupied by the military. They could take a walk or a bus ride and observe how the Sri Lankan military takes away all the economic opportunities of the local Tamils in the North and humiliates them by destroying the cemeteries of Tamil militants and building their own military monuments.

The list of violations by those in power is so long that these visitors would not be able to see and hear about all the abuses, even over days. And, on the days that international cricketers are visiting Sri Lanka, there is not likely to be any abduction of human-rights activists, or a burning of media institutions, or an attack on university students and journalists, or a threat to priests, or sexual abuse at the hands of the military.

Above all, the South African team should try to make a stand: to make it clear it is visiting Sri Lanka not to endorse and support a dictatorial regime that is discriminating against minorities, suppressing peaceful dissent and refusing to move towards reconciliation.

Its silence or inaction on this in Sri Lanka is a form of complicity. Victims of violations and their families are among those who welcome and cheer visiting cricketers. What can the South African team give back to Sri Lankans?

We should learn from history that prohibitions tend not to work, even if the intention is good
Read more
Advertising
Continue to the category
Politics