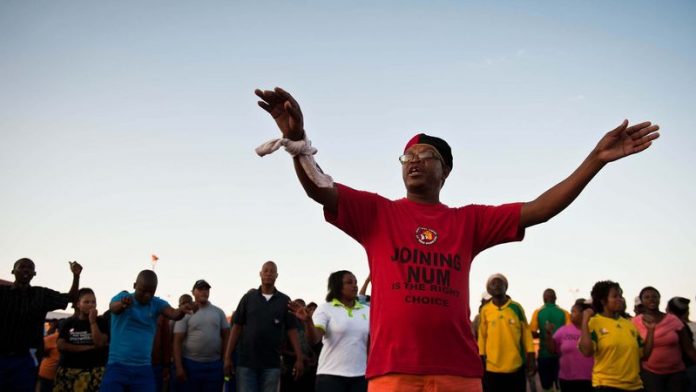 "Wage negotiations in the gold mine and construction sector have formally collapsed," spokesperson Lesiba Seshoka said on Thursday.

Seshoka said the Commission for Conciliation, Mediation, and Arbitration (CCMA) had issued certificates of non-resolution in both instances.

NUM has notified employers in the construction sector, represented by the South African Federation of Civil Engineering Contractors (Safcec), of its intention to begin strike action on Monday.

Seshoka said the union will march to Eskom, the Chamber of Mines and Safcec on Saturday to deliver memorandums of demands.

"At the same time, gold workers will be consulted and be given feedback on the outcome of negotiations at the Chamber of Mines, where the gold companies made a meagre offer of 6%," he said.

"The gloves are officially off, the battle lines are drawn and the fight will be taken back to the mining, construction and Eskom oligarchy."

Eskom has declared a dispute with the NUM over wages, which is being discussed at the CCMA.

The NUM wanted a minimum of R7 000 per month for surface workers and R8 000 for underground workers.

Gold producers represented at the Chamber of Mines said attempts were made to address some of the union's many demands.

"The employers tabled a revised offer of 6% for category four and five employees, and for rock drill operators," said Charmane Russell on behalf of gold producers.

"In addition, the offer in respect of living-out or accommodation allowances will be increased in line with inflation."

She said the offer would increase the basic wage for underground entry level employees to R5 300 per month and the living-out allowance to around R1 730 per month.

"In terms of this offer, the guaranteed wage for entry level employees will be R9 120 per month." – Sapa

The national solar water heater programme is set to take off once again this year, but meanwhile the government is spending millions on storing heaters that have yet to be installed
Read more
Friday

Although mismanagement and corruption play a role in the financial state of affairs at municipalities, it is not the only reason they are failing
Read more
Advertising
Continue to the category
Education